In the steerage the family slept on a straw-covered plank bunk with barely enough room for four – let alone five. After much seasickness all of Guri’s children suffered from measles and her youngest son died. 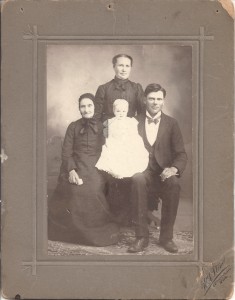 Guri is seated on the left.

Click Here to Listen to the Audio Version of the Story, as Read by Julie Buckley, the Great-Great Granddaughter of Guri.

The greatest bravery was shown by Guri Syversdatter Sundbreen,a little woman in physical stature but a giant in faith. In May 1857 this thirty-eight year old woman and five children sailed alone from Drammen, Norway for America. At the last minute her husband, Lars Paulson Troo, was arrested and taken to jail because a “well-known crook – devious. sly, and deceitful” falsely alleged that Lars owed him twenty dollars from a debt that was nine years old. What a predicament!

Since the passages across the Atlantic had been paid for and nothing was to be had to live on in Norway as all but the necessities had been sold at auction, Guri decided to brave the dangers of the ocean alone with the children rather than lose the money advanced for the passages. On board ship her trials began. First, Guri’s trunk was placed at the bottom of a huge pile of chests so the family had only meager provisions for herself and five children, ranging in age from thirteen to three, during the trip of slightly over five weeks.

In the steerage the family slept on a straw-covered plank bunk with barely enough room for four – let alone five. After much seasickness all of Guri’s children suffered from measles and her youngest son died. He and eight other children who had succumbed to measles were placed in canvas bags and thrown overboard into the sea.

When they left the ship at Quebec, one son was still so ill that he was taken to hospital quarantine and the rest of the family were forced to remain in one of the small houses built on the pier until Paul became well enough to leave. During those eight days Guri waited in vain for Lars to arrive. Since Guri had no money, she and the children were finally allowed to travel free by boat and train to Chicago. The children sat and slept on the reindeer-hair robe which the mother spread out on the floor of the immigrant boxcar. When the family had no place to go in Chicago, the mother bedded them for the night in one of the wagons standing on the depot platform.

The next day she sold some copper kettles and other items so that she had enough money to buy tickets to Madison, Wisconsin, near where she knew that her husband’s brother lived. When the train stopped for a short time, the mother got off to find out if the family should remain there, but the train started to leave just as she was running toward it. A large man standing nearby hoisted her on the last car of the train, and at the next stop she was re-united with her family.

At Madison, Guri and the children sat at the railroad station for two days and three nights, and she later said that she didn’t know whether to go “in or out, up or down.” She literally did not know which way to turn. In her first America letter, sent to Norway in October 1857, she explained, “There was a way out which was wonderful, a way of grace which is the right helper.”

A man from Bergen, a complete stranger, took the family to his home twelve miles from Madison where my great-grandmother then worked milking cows- morning and evening, churning, and making cheese. The story of Guri’s arrival was published with the title “Where is Her Husband’s Brother?” in Emigranten. July 22, 1857. Describing the arrival of Guri and family, the story requested anyone who had any information about Guri Syversdatter’s husband’s brother – Engebret Paulson Troo – to come to get the family or to send his address to Erik Johnson Engesather, Westport Post Office. Dane County. Wisconsin.

This is the story which Engebret read, and two weeks later he came with horse and wagon to take Lars’ family to his home. Guri felt very blue, however, for she thought Lars had been killed or drowned since-she had not heard one word from him since she had arrived in America. She thought she would never see him again, and she wept as she did her spinning, even though she tried hard to keep up her courage.

Then one day when Engebret went to the country store, whom did he meet there but his brother; Lars had stopped briefly to bring greetings to the store- keeper’s wife from her father in Milwaukee. For this Lars had been paid four dollars, the first money he had earned after having finally cleared his name in Norway and traveled via England and Quebec to America.

He too. had read the story in Emigranten and he was enroute to locate his beloved family. When the children who were playing outside saw their father and uncle walking across the field, they ran into the house shouting. “Papa is coming! Papa is coming!” Guri could hardly believe it. But when she looked out of the window and saw one of the men dressed in “Hallingdrakt,” she recognized Lars.

His name was properly cleared and honor restored to the family through another Emigranten story published immediately upon his arrival. August 24, 1857. The writer expressed sympathy for Lars’ “wife and children who on account of the shameful trick had had to travel over the ocean alone and experience suffering and evil” until they were finally united with their relatives.

Three years later. in June of 1860. Lars and family were among the first six Norwegian families to settle in Emmet County, Iowa and this wooded land along the Des Moines River remained their home for the next half century.

As it happens. Guri and Lars were the parents of my mother’s mother. 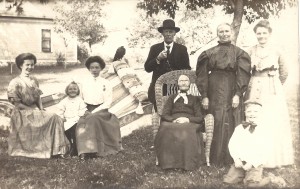 This story was shared by Joan Buckley, a member of Palo Alto’s Grace Lutheran Church and great-granddaughter of Guri.