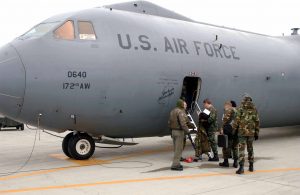 Otto grew up in Germany and at a young age was enrolled with the Nazi youth. After leaving he joined the German Navy and fought in World War Two. He was captured by the British and put in a British camp until the end of the war. He got to go home after the war and got a job playing music for the United States Air Force in their main base in Europe.  He had been a guitarist even before the war.

This is where he met his future wife Linda. Linda had just graduated college at Stanford and moved out to the Air Force base where she was promised a job as an entertainer if she could get herself out to Germany.

His job was to be part of a group that plays music for the air force at a bar like canteen. Due to this Otto got somewhat acquainted with the American culture. He played American music and was with American soldiers and so America wasn’t too foreign to him. He met Linda and they became close due to them both being entertainers. US soldiers tended to not talk to Otto since he’d been part of the German Navy previously.

Linda wanted to move back to California as she did not enjoy Germany and loved California. Even though she was with the United States soldiers she wanted to move back to the American culture and the place she loved. She convinced Otto to come with her and they moved out to Southern California together. They got a small apartment near Los Angeles and Linda got a job as a waiter. Otto struggled to get a job as he didn’t know much English. He eventually got a job playing guitar with a small group and slowly got used to the culture.

Otto enjoyed America as the people were much more accepting of everyone. After going through the Nazi youth he much preferred the equality of people America had. America to him was a place of freedom he had not experienced in Germany because while he was celebrated from being a soldier he was not in love with German culture due to the hatred it had towards other people.

A few years later they moved up to Palo Alto so Linda could be next to Stanford, where Linda went to school, again. Otto and Linda married and had two sons in Palo Alto. Otto had gotten used to the change with the American air base but still struggled to adapt to American culture.

This story is based on an interview conducted by a student in Palo Alto.  The names were changed.