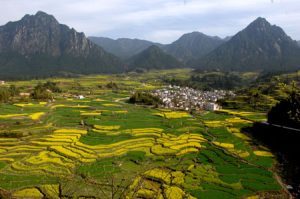 My parents were afraid to file the paperwork necessary to immigrate because if anything went wrong, they could be severely punished by the government.

“Where is all the gold?” I thought as my preconceptions about America were shattered and I dejectedly peered out the plane window at the end of my eighteen-hour flight to America from my hometown, Taishan, a rural village in Canton, China. In Taishan, under the communist government, most were farmers who worked in close quarters with their neighbors. There were no private businesses, and the few shops and health clinics around town were sparingly dispersed amongst the countryside. Large cities were often crowded, so my father, a government engineer, was forced to commute from Taishan to work every day. Money was scarce, but unnecessary due to the self-sufficient nature of our village. Little did I know that our carefree lives would change drastically along with our immigration to America.

Although I do not remember, my parents said that getting the Chinese government’s approval to fly out into America was the greatest difficulty. There were many formalities to attend to, such as verifying our birth certificates and confirming that our airplane tickets were to America. In 1964, we finally received permission from the government to move to America, but the constant political changes hindered the progress of our immigration. My parents were afraid to file the paperwork necessary to immigrate because if anything went wrong, they could be severely punished by the government. Punishments ranged from my dad losing his government job as an engineer to being put in jail or even being tortured by revolutionists. The severe consequences intimidated my parents, so they did not file the paperwork until the early seventies, when other people had successfully immigrated without negative consequences.

In June of 1980, I was twelve when I arrived in America along with my parents, siblings and grandmother. I remember staring wide-eyed at the foreign characters cluttered on the signs of the San Francisco Airport, and listening to the mystifying blend of languages being spoken. The ringing of airport announcements blared in my ears, but within the roaring chaos, the familiar Cantonese announcements granted reassurance in this alien environment. My uncle, who had already successfully immigrated to America, picked us up and drove us to his house and our place of residency until we purchased a house three months later. I remember staring in awe as the flashing of traffic lights, roaring of freeways, and liveliness of cafes blurred past my innocent eyes. Upon arrival, I recall meeting my cousins for the first time, which was a surreal experience. They loomed over us, casting a long shadow on the concrete ground, yet their kindness was apparent as they brightly smiled and spoke to us in a welcoming tone. Despite having seen their pictures before, they appeared differently than I had imagined. They were all in their 30s at the time and were larger and more mature than any of my siblings, who were all under the age of 16.

Although we had managed to secure a house, the debt we were responsible for was staggering compared to what we had arrived with: 500 dollars. In a rural village like Taishan, money was not a large issue as we could easily survive  with the stability that came with my parents’ established jobs. However, upon moving to America, we ended up with several thousand dollars of debt towards our uncle, who had paid for the airplane tickets to America, along with our house and education.

As if in a parallel world, my siblings and I remained obliviously happy as we entered San Francisco’s English as a Second Language (ESL) program, where we met several other immigrants who were at a similar English level as us. Teachers catered and reduced difficulties, as well as discouraging any discrimination. Ms. Fong, one of the bilingual Cantonese speaking teachers, helped me meet May Yeung, another Cantonese immigrant with whom I am still in close contact with today. I distinctly remember May’s reassuring and amiable words that eased my tension among the unfamiliar setting. Her catchphrase “fong sam,” or “don’t worry,” echoed in my ears, and I slowly began to grow at ease with the foreign environment.

Back then, the radical change in lifestyle that my parents were facing was never made apparent to me. My father’s engineering degree from China was all for naught as the language barrier proved too difficult to overcome. He began working as a kitchen helper in a restaurant and gave up a comfortable office job with an afternoon nap to come to America and physically expend himself six days a week, all for the sake of a better future for my siblings and I. My mother, who worked a painless cashier job prior to immigrating, began working six days a week at a sewing factory, which she was able to acquire work at a privately run factory. There, hundreds of other Cantonese immigrants were lined up in a dark room, forced to sew nonstop until their shifts were over, only to make pennies compared to what was available back home.

The wages my parents earned, no matter how hard they worked, were not enough to cover living expenses for our family of five. Eventually, my siblings and I stepped in to fill in the gap by working in the same sewing factory on the weekends. There, the dust stung your eyes, the sound of nonstop machines deafened your ears, and the clock seemed to freeze. I once froze in horror as the worker across from my table had the needle pierce her hand, and instead of showing any signs of pain, she simply requested a gauze from the manager while holding up her hand as the blood ran down her arm, wrapping it around the injury. She would continue working for the rest of the day, requesting new bandages whenever the blood visibly soaked through.

The reality of how grim my parents’ lives became since our immigration was shrouded by the hearty laughter that echoed through our house during dinnertime, and the love they blanketed us in. Like the injured worker, despite my mother and father’s transformation into servitude, my siblings and I never heard them utter a single complaint.

Our family’s hearty laughter constantly echoed through the house, and my siblings and I were constantly embraced by their love like a cashmere blanket. We were close with our neighbors from China, but quickly found that the language barrier in America prevented us from becoming close with our foreign neighbors. Consequently, we quickly befriended the cordial Sungs, another Cantonese family that had immigrated prior to us. My friends, who were also immigrants, were in a similar financial situation, so we were easily able to understand each other’s needs. We ended up spending time together on inexpensive activities, such as hanging out at each other’s homes. As a result, our homes were constantly alight with the vociferous sounds of our glee as if we were all one family.

My parents’ decision to move to America transformed our futures. If we had stayed in China, we would have ended up as farmers, forced to forever physically exploit ourselves for the sake of money. In China, only the best and brightest will make it to college, with no community college for those who do not score high enough on the National Higher Education Entrance Examination, which is the only determining factor for Chinese college admissions.

In America, access to education is not limited. If people want to attain higher levels of education, community colleges exist for everybody, regardless of your academic performance. Thanks to my parents’ sacrifices, we were all able to attain collegiate education and acquire profitable jobs to support our own families. The sweat and tears of my parents are what averted my fate from a dismal and unfulfilling life to a gratifying and eventful one. In the end, their sacrifices showed me the road to finding my own “mountain of gold.”

This story is based on an interview with the subject (who chooses to remain anonymous) by a family member who is a student at Palo Alto High School.