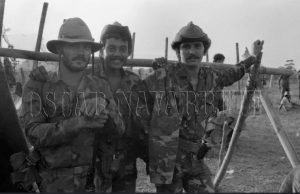 Juan (left) as a soldier in Nicaragua in the 80’s

What was your life like in Nicaragua before coming to the US?

I was in the army, I was fighting in the Nicaraguan war in the 80s -Living in the mountains walking from sunrise to sunset -Couldn’t walk at night for safety reasons -We were eating 1 time a day, canned pork beef or sardines -We were given 1 lb of rice for 10 soldiers -I did not go home for 26 months – I got out of the army in September 1988 and left Nicaragua in February 1989.

After leaving the army, I did nothing. There were no jobs at the time so I was living at my mom’s house. There was no future at that time. I was tired of the war The economy was bad with no opportunities for younger people

Did you have a plan to return to Nicaragua?

Well I didn’t know, my plan was to make a life here in this country.  In the back of my mind I thought about it but I didn’t see a future going back. The economy is always unstable over there.

How was your journey to the US? What difficulties did you face?

I flew from Managua, Nicaragua to Guatemala because no visa was necessary -From Guatemala, I took busses all the way to Mexico until arriving in Matamoros, Mexico.  We only travelled by bus at night because it was safer -Mexican immigration officers would stop you and take your money during the day. A coyote picked us up in Matamoros and took us across the Rio Grande to Brownsville, TX. We were caught by border patrol who took us to a detention center. I applied for political asylum, and was transferred to another Texas detention center where I spent a month.  They asked for $3k bond which was later lowered to $1k.

My aunt paid it and they let me go. I took a Greyhound bus all the way to New York.  The journey was not as dangerous as it is now. It wasn’t that bad, busses were nice. The hardest part was leaving Nicaragua.

What was your first week here like? Did you feel lost or overwhelmed?

I was in NY and a week later I was working in a supermarket in NY cleaning the dumpster in the basement.  The US felt big, everything was big. Everywhere felt overcrowded, I was not used to it.  Subway trains were packed like sardines. It was a different way to live.  It was so cold and snow was very high. It was hard to walk through the snow. I didn’t have too much time to think because everything was moving so fast. 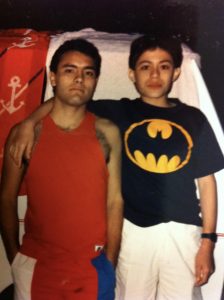 Juan in NYC (left) soon after immigrating at age 25

How long did it take for you to feel comfortable speaking English?

Have you experienced discrimination in the the US?

Not from businesses, but yes from people -I was called a wetback by Puerto Ricans on the train -Even so we are both latin they considered themselves white Americans. I was robbed twice on the train, only had bus tokens

Did you ever consider moving back to Nicaragua?

Yes, for retirement…. Also when you were 1 year old because we were here illegally and we considered saving money to open a business in Nicaragua -But legislation was passed and we were able to get our green cards -NACARA Law for Cuban and Nicaragua refugees passed by Clinton

Are you happy with your life here? Do you think it is better than life would have been in Nicaragua?

Definitely, for me much better life. We can work hard and make a living here. Yes, I imagined a big country and a lot of opportunities for work. -Freedom of speech, we didn’t have that in Nicaragua. I can say and think however I feel and no one will do anything about it here.

Author’s note: I chose to interview my Dad and while I have heard the story of how he came to this country many times, this was different. Hearing his responses to my questions really put into perspective what his experience was truly like. Trying to imagine myself in his shoes at the age of 25 is almost unimaginable. Something about imagining his experience, really makes all of my own anxieties about life feel so small.

The interview and writeup were done by Amy Prado, daughter of Juan.