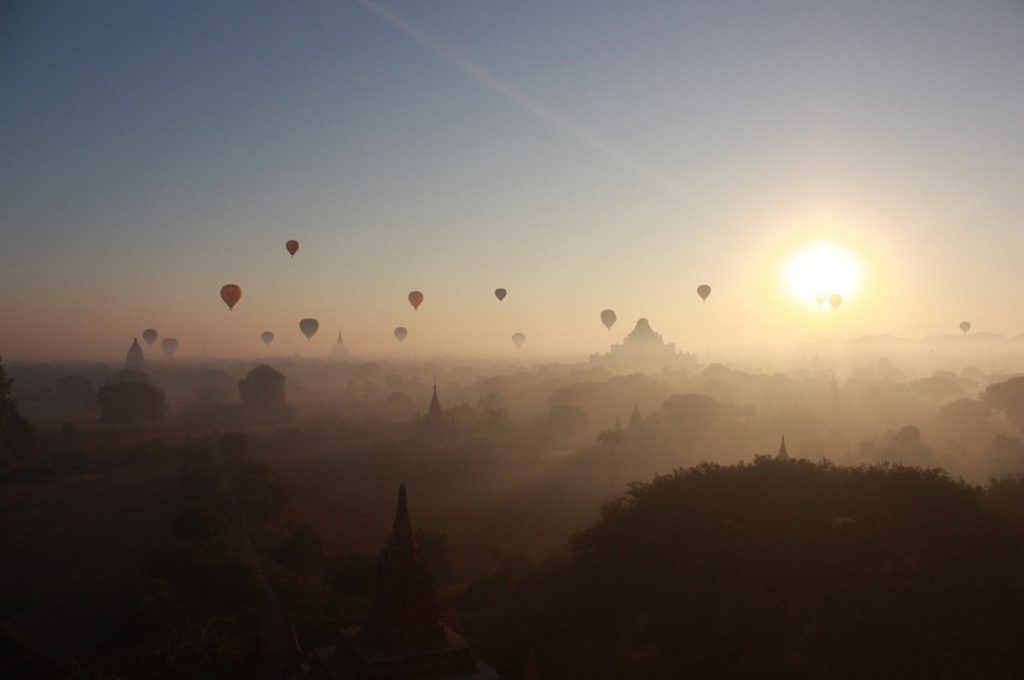 This is the famous place Pagan city in Central Myanmar.

In 1999 I married my wife and my oldest child was born the next year. Even though I was now a father, I knew full well that life in this country could not continue. I had spent the previous four years before my marriage traveling around Myanmar. Based on these experiences, I learned something about my own country: that there was no kind of any opportunity to escape out of poverty. Because the rest of the country was the same like me and my family; everybody in the country was not free from the problems of being poor. During the next six years, four more children were born to me and my wife. During those years, I was thinking about a way to escape out of poverty. The last of those years were the turning point of my life.

Both I and my wife were low government clerks in the township of Kanpetlet. My own father was also a government clerk as well. Even though we were government officials, life in the country was very hard on us too. The earning of a common person for a day was only enough for three person’s meals. And that was it. This was the same for government officials like us. The government did allot us 75 kilos of rice as part of the monthly payment. This wage could not support other household expenses like clothing, rent, and other small costs such as school fees for the kids. Government officials like us clerks, the Police, school teachers, Fireman could not really support our own families financially–even with little revenue that came to us in forms of bribery and gift token. However high-ranked government officials are usually better off mostly because they tend to receive large amount of bribe money. Everybody was in some way in debt to another person. This widespread socio-economic situation often times caused conflicts between the people and the government. Some of the conflicts were local, but most of the time the conflicts stemmed from common resentment against the government. The town of Kanpetlet was usually very peaceful even at times when these common resentment would turn into bloody conflicts.

From 2002 to late 2006 or 2007, people across the country were forced to work on government plantation projects. Each province and state was required to grow government assigned plants; these government projects included growing tea leaf in provinces and states that are along the western, northern, and eastern parts of the country. Most of these regions were mountainous and have a cold climate. Provinces and states that are along the central and southern parts of the country were required to grow species of various plants that produce nuts, which are used as main ingredients in manufactured products like cooking oil and body lotion. The government was intent on exporting these products overseas to countries such as China and India because economic sanctions by both U.S and U.N had closed trade with a lot of other countries. These sanctions partly explained the economic situation within the country.

Labor quota for these government plantation projects were two days a week. In the township of Kanpetlet, each family had to send at least one adult to participate in the planting and caring for fields of tea leaf. Government officials and common people alike were threatened with imprisonment and allegation of anti-government charges, or cancellation of their employment–to make us comply. Even the Police and the Fireman have their own section of land plot in which they are expected to grow tea leaves. Since I and my family lived in one of the housing reserved for only government officials and their families, I and my wife had to make sure we met the labor quota. School teachers and principals were also forced to organize their students to participate in the project. It became almost an unspoken mandatory in town that all students from Kindergarten through High School must labor twice a week, and it was especially enforced on high school students.

By 2006 I knew with certainty that I could not live in my own country and support myself and my family in the future. The government was as well oppressive. Literally there was not much I could do to make myself a comfortable life, with enough money. So money became my goal as I left my country. The only thing I could think was how to make money and more money. And that was it.

Around this time, I had been contacting various people that were part of an illegal agent network that have presence all over Myanmar, Thailand, and Malaysia. One of their representative was in Kanpetlet, and I happen to know him. From him I got contact of other agents that were in Yangon. Right after that, I went to Yangon. The city was like the commercial center and financial capital of the country; it was the only city in the country then to have tall buildings and thousand of cars running on roads that were not repaired regularly, with cracks that were so wide that it was visible to the naked eyes. I went there to secure the details of leaving plan like dates, border town, and dangerous parts of the traveling. Then I went back to my hometown Kanpetlet and left again in the following three months to meet up with the agent in Yangon. This time I left for good.

There were others like me, surprisingly though most of us were from the Chin state: a mountainous region on the western part of the country, covered with forest and bamboo plants. Once we have all gathered in one of the agent’s house in Yangon, we took a train for a whole day to reach Moulamein City. From there we traveled in boats for several days and a truck ride along muddy roads before reaching the border between Myanmar and Thailand. After crossing some spiky fences which was the actual borderline, we had to walk for several miles in the dark; then we got picked up by two or three trucks along some unfinished-gravel road. We were in these trucks for hours, then we were dropped off to a Thai’s agent house. The house was built somewhere in the countryside, where tall rubber trees and bamboo plants create a lot of shade for hiding, in case the Thai police got news of illegal human trafficking.

We spent quite a few weeks in the Thai agent’s house. Suddenly one evening as everybody was getting ready to sleep after the evening meal (dinner), we were told to pack our stuff and be ready for journey toward the border between Thailand and Malaysia. We took a van ride for the rest of the evening, then we were dropped off to some unfinished-gravel route along tall forests covered with coconut and tropical green forest trees, which we travelled on for hours in complete darkness. We reached the border fence after that long walking in complete darkness, but we had to wait for Malay agents to arrive with their vans. As we sat silently in the dark, swarm of mosquitoes feasted on our blood. The darkness barely illuminated by moonlight was full with the sound of smacking of skin against the hand. Smack smack, then we would have to put a forefinger on our closed lips to signal each other to be quiet just in case a helicopter (border patrol) flew above us.

Once those Malay agents arrived, we were all packed into the vans quickly. The interior of the van’s glass pane were covered with black draperies. These vans then drove us straight to the capital city of Kuala Lumpur for the rest of the morning. The city was our destination. All of us were taken into another agent’s house, and this one being our final guy. The payment for my journey was counted as a debt of 4000 ringgit by the final agent. This final agent though was a Myanmar who have converted to Islam and married a Malay woman. The final agent found work for me as soon as possible, and I was expected to pay back my debt. He told me I need to know enough Malay to be able to communicate clearly at work. It took me 6 months to learn Malay language using a transliteration book from Burmese to Malay.

Over the next three years, I worked very hard trying to save every bit of money. I called my whole family in 2009 to Malaysia relying the same network. It costed me over over 15,000 ringgit and some debt money borrowed from a friend. But I was not to be reunited with my whole family. One of my daughter, who was a twin, had died around the year of 2008. But fate determined that me and my wife are to have a daughter while we were in Malaysia. She was born around late 2010. During this time, more costs piled up one me as I was also calling my own brothers and sisters using the same network. My extreme and careful savings were all gone now. However I have more things to worry about. Within the next one year and a half of my family’s arrival and their registration with U.N Refugee Office in Malaysia, U.N refugee center informed me that my family were to immigrate to U.S.A.

In March of 2011, we flew off from Kuala Lumpur airport to Hong Kong, then from there to San Francisco, then to Seattle all in two days. My family was greeted by a middle-aged, tall, and fat Somali guy in SeaTac Airport, who was our social worker for the first six months. So he helped us settle in Burien. He took us to our first family appointment for the immunization shot. Those shots were very painful for all of my children. It took them days to recover from the pain and fever. Those first moments were very exciting for my family. My children were the only comfort to me and my wife in this strange and new land. The next five years in U.S, I and my wife received the blessing of three more kids: two boys and a girl.

Now I felt like an old man, and the image of my own father and mother continuously came back to me. My father passed away while I was in Malaysia in 2009 or 2010, I did not quite remembered. My memories are really getting old. My mother is still alive, and I want to see her again. Most of all I want my children to have an education and work like an office man and a businesswoman without tiring their bodies too much. I never ever want my children to worry about their day’s earning or their money for the next day. Now I work as a houseman for a Marriott hotel, which I got paid pretty well. I did hope I had led an interesting life, so that my children and my future offsprings can remember me as a hero. I really do wish that. Now honor is all that matter to me, not money. In a country where I got paid regularly, all I want these days is people to recognize me as a person who was a man in his time and in his own right.

I really appreciate those who have read my story. Your time of reading my story meant many thanks to me.

This story was written by Salai Menta, the son of Hung Kwee, the subject of the story. Salai is a high school student near Seattle, Washington.