Escaping a Revolution to Find the “American Dream” 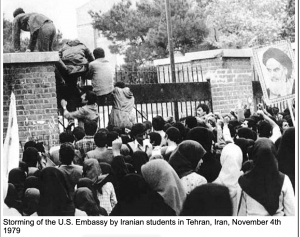 When you look back on your younger self, living in Iran, what compelled you to come to America?

As a kid, before the revolution, most people had hopes of going to America to go to school, and eventually, come back to Iran to establish their life/career. The general feeling was that an American education would allow us to come back home and create better futures for ourselves and our families. Anybody who came back with a degree from America in those days could establish a very good job and their life would be set.

That was my idea – to come, get educated, live here for a little bit, then go back. My plan was always to come to America after high school and go back. We all still had faith in our country’s future. After the revolution though, that idea died.

What were you doing in Iran prior to immigrating?

I did some military service in the army, which was cut short because of the revolution. They let everybody out earlier. So I started working with a friend of mine, we established a company importing beauty supplies from Germany. We were doing pretty well, expanding the business. And from there I was introduced to another person who was doing International transportation, and he invited me to go work in his company. I worked there and was introduced to other people from European countries working in the import/export business. I met people from Germany, from Italy, from France, England. We communicated in English.

How much did the events of the Islamic Revolution influence your decision to leave home?

The revolution killed any kind of hope we had for the future of Iran. From that point on, I’d say a couple of years after it started, the idea of going to America for school and coming back changed. At first we thought the revolution was going to turn our country into a democratic republic. As soon as it turned religious, we knew that things were going in the wrong direction.

It didn’t make sense to come back. What was happening to our country was against our beliefs. Everyone’s plans for their future changed a couple of years after the revolution.

Well this was right when the revolution started, so a lot of Iranians were trying to get visas to leave the country. They were trying to get whatever visa they could get, everybody just wanted to get out. I went and applied for my student visa; they put your name down and give you a number outside of the embassy. Everyday there were people lined up outside waiting to get their numbers and have them called. They’d accept 150 people everyday. 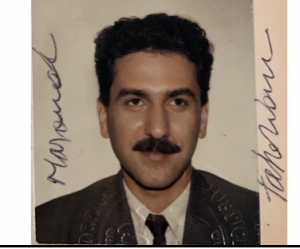 I was on a two-month waiting list. So in the meantime, I talked to one of the embassy employees and started helping out by getting the lists of people’s names and numbers. I used to go to the embassy everyday, because my brother Hooshang lived across the street from the American embassy. I could see the embassy’s door from his window. I’d go to check people in and take their names down, and also check my status on the wait-list.

On the day that the hostage crisis started, my turn to get my visa was supposed to be three days away. That day, I was at my brother’s house, and I started hearing a lot of commotion. I could see a lot of people crowding and yelling around embassy – I thought there was some kind of demonstration going on. I didn’t see them climbing up the gates or anything, so I assumed it was just a protest. By the time that night came around, I found out that they had actually taken over the embassy.

So, everyone who was waiting for a visa at that time was obsolete and so was mine, and that was it. I was very angry. I could’ve gotten my visa three days later. That event alone delayed my immigration another five years. The government then closed all the borders, they weren’t letting anyone get in and out, and after they opened, the only way I was able to get out was to get my visa from a European country. The only reason I was able to do that was because the business I owned worked closely with European countries.

How did your family and friends react/treat you when you left home? What were their expectations or hopes for your future?

There were mixed feelings. Everyone wanted to leave the country at the time. Of course, they were sad that I was leaving, but at the meantime, they were happy that I was able to get out. I got my visa to come to America through our company; we were working with European companies and therefore had some influence. So I got my visa from Italy, got my American student visa from there, and came directly from Italy. I was definitely considered one of the lucky ones. It wasn’t that easy for everyone to leave the country.

My family was happy that I had this opportunity to go to America for school, but they were also sad because they thought we could’ve established a good life in Iran. I had a good job and they wanted our children to be there. But they wanted the best for me, and with this lucky chance I got, they understood that I had to take it.

What were your expectations or hopes for life in America?

Back then, when I was younger, America seemed to me and everyone else like a wonderland. Everything was new, advanced, life seemed to be easier. Success seemed easier. Not only that, but the freedom was the most important thing.

Where did you start out in the US and what kind of work did you find?

I had a cousin who lived and worked in Oklahoma. We were supposed to stay and work there with him. He had a supermarket and oil well drilling company. I stayed there for a bit then ended up moving to Los Angeles because that was supposedly where all the Iranians were. I had a few close friends who lived there who grew up in the same neighborhood as me in Iran. I found a job working the night shift in a 7/11, and after like 6-7 months I moved to Northern California, to live with my cousin in Fremont. Over there I started working in a convenience store.

What experiences or memories stick out to you from those early years in the U.S.?

It was New Year’s Eve when we first landed in the states. We arrived in Edin, Oklahoma, where I had a cousin. This was my first impression of America. It was dark out as they drove us out of the small town into a really rural area. I was looking around trying to find those high-rises I associated with America, and was pretty surprised to see it wasn’t as interesting as I thought. There was nothing.
I remember the next day after I arrived, it must’ve been New Year’s day, my cousin drove me to see his business and get acquainted with the work I’d be doing. When he drove out, I kept looking out the window, and all I could see was flat farmland, even some tumbleweeds blowing across the deserted highway. There was nothing.

I remember asking, “This is America?”. It took me a while to learn that we were in the middle of rural Oklahoma. It was a small town, you could go from one end to the other in twenty minutes. It was very depressing. So from that point on, I wanted to get out and actually see America. The America that I came so far to see.

At any point did you consider going back to Iran?

I was living in Northern California with cousin Mo. It’d only been three or four months. And one night I came home, I used to walk from the convenience store I worked at to his house, and my car wasn’t there, I guessed he had taken it out. The next morning, a police officer and the building’s manager knocked on the door and asked me, “Who are you?” I answered that I was Mo’s cousin.
They said that he was in an accident the night before and he passed away. So, there I was, all by myself, with nothing. It took me a while to recover from this, with nowhere to go, I had nobody in the United States. So I wanted to go back to Iran. Then I told myself, I’m gonna try a little longer, I came all the way here. I’m going to stay awhile and see what happens.

How did you end up owning your own business and establishing the life you have now?

After my cousin died, I met a guy who was buying and selling cars from his house. He would put an ad in the newspaper and people would show up to his house. I had saved some money from Iran and started doing the same thing with him. So we used to buy cars from auctions and fix/sell them at the house for some extra money. Then after a while we had enough money to rent a lot and start a used car lot. I did that for a bit with a couple partners, but realized I really didn’t like having to be dishonest with customers. They would lie and sell people cars that weren’t good, and at one point I had enough, I couldn’t do that anymore. That’s when I decided I was going to work for myself.

For a short while, I worked for a guy in his painting company, eventually became his foreman and started making good money. After a few years working there, it was maybe 1991, I got my contractor’s license and started my own company. I hired helpers and started working all around the Bay Area. That’s the business I’ve built to this day and it’s what’s given me this life in America.

What did/does the phrase ‘American Dream’ mean to you? What feelings does it evoke and has its meaning changed for you at all?

It hasn’t changed. The American Dream is, you can do anything you want in this country, as long as you follow the law and work for it, it’s available. Plus, there is a lot of freedom in general that you can’t find anywhere else in the world. That’s the dream people have: to come here, be a part of this nation, live here, work here, and be free. There are a lot of things we take for granted in this country that are unimaginable in other places. The American Dream means freedom, that’s basically what it is.

The interview with Masoud was conducted by his daughter Leila, a student at Foothill College in Los Altos Hills, CA.