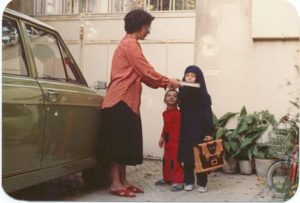 I was born in Iran, and at the age of 10, my family and I absconded from the multi-systemic injustices and immigrated to the US in hopes of extended opportunities and freedom. I was about 3-years-old when the Iran-Iraq war started. Consequently, the only memories of Iran I had included the sounds of sirens and hearing the Iraqi military jets fly over our home as we huddled under a blanket praying for another night to stay alive. I recall all the windows in our home shattering from the impact of the bombs so often that boards eventually took their place. Road trips that ventured through the scenic mountains towards the Caspian Sea became something to look forward to, yet the thrill was short lived because of checkpoint threats, interrogations, violations, and prosecutions for crimes such as having music cassettes in our car.

As the war grew more intense, we had to leave the country abruptly, and came to the US with virtually nothing in 1986. This was after a few years of moving back and forth to Sweden where we stayed with my paternal aunt. My family did this to make sure we came to America legally with our Green Cards because my parents wanted to make sure we were law-abiding residents in our new home from day one. The change in our socioeconomic status, and our difficult transition to a new culture, created a number of challenges for my family. We experienced economic and social poverty in every which way imaginable. This included my parents having to adjust to eating 1 or 2 meals a day so my brother and I could eat more. We were evicted several times from one apartment to the next because my parents’ $3.75/hr minimum wage jobs were not cutting it. I had only 3 sweaters (which my mom knitted) and 2 pair of pants to wear for a very long time through the cold months of winter in Illinois. Also, I was not able to make friends in school because painting them a picture was just not a good enough gift in the American birthday gift giving tradition…..I could go on but I think you get the picture.

Some of these challenges were so harsh that it made living in war in Iran feel not quite as difficult. Although I was able to assimilate within the new environment rather quickly, I was marginalized and lived in constant reminder of being different and belonging to a country that was associated with terrorism (and I still do). Unfortunately, no one took the time to understand how those post-revolution Iranian rulers also terrorized us as the citizens of that land. I watched my friends who also came here as immigrants (from European countries) in the same period of time seemingly assimilate more easily and it appeared as though they did not feel their immigrant minority status shadow over their heads with daily reminders. They were treated like everyone else simply because of the color of their skin and being considered White. To this day I am asked, “where are you from” and when I say I am an American they follow by saying, “no, where are you really from?”

Despite the hardships, my experiences as an immigrant child growing up in the US helped me gain an appreciation for the gift of life and the importance of making the most out of each moment regardless of how small or insignificant it may feel to others. I treasure every moment and every memory with pictures and collages and deep reflections captured in my blogs. This is because my immigrant story is tied to so much loss and despair….pain and anguish that has yet to heal 30 years later. Through the years so many of my family members passed away (both grandmothers, uncles, aunts, cousins), and I never got to see them again. I grew up here wishing that just for one holiday in my life I could have family around and feel the love that everyone else seemingly felt. I tried and tried again, year after year, to create my own kin family but soon realized that everyone had others to celebrate their lives with so they could not put the same amount of effort and time commitment in creating new traditions that included me. It always feels as though they are so kind and inviting, but there is a nagging feeling reminding you that you do not quite fit into their world. It has only been a few years now (2 to be exact) that I have finally accepted that it is ok for me to feel this way and sit with the pain of not having a stable extended family/or kin to share my life with. These feelings always made me resentful of the fact that I HAD to immigrate. This is just one of many struggles of what it feels like to be ripped apart from all that you know and everyone that you love. Sometimes the choice of immigration is a choice between life and death.

Although I suffered for many years from clinical depression, I am here to tell you I have not been alone in my pain. Being a witness to so much pain and loss, and constantly hearing the stories of my parents’ generation who had made so many sacrifices, left me wondering how anyone could ever recover from experiencing such injustices. I was the lucky one. So many others that have traveled this journey to the US from Iran lost so much more than I can ever imagine. Imagine the pain of loss that they felt magnified by having their fathers executed after the revolution, their immediate family members drafted and killed in war, their homes bombed, having to cross borders by foot illegally with children, having to live in refugee camps, having to miss years of school to make sure they stayed alive, and so much more. This is why I am encouraging you all to ask immigrants and refugees about their stories. I did just that, and throughout the years, I began to pay attention to the resilience of individuals, the way they created meaning from their unfathomable experiences, the impact of their social support networks, and the therapeutic function in feeling understood. This is when I began to passionately learn about the process of psychological healing and how societal values are formed throughout the generations.

My desire to help others, particularly in the public sector, who are underserved and underrepresented has fueled my drive to continue to do all that I can to educate myself and in turn gain the skills to help others. I wake up every single morning with one constant thought and that is, “on this day, in what way can I help just one person find his/her own strength when faced with adversity?” This is what drives me every single day and helps me overlook some of the challenges I am faced with on my own journey to find my way in this world where I can help others in some small way. Believe me when I tell you this is not just a reflection of my personality. In fact, this is a by-product of the courage I found in overcoming my own struggles as an immigrant and being given the chance to live in America and see the generosity of so many Americans when my family and I needed it the most. Many immigrants like myself have faced these challenges with bravery, determination, guided by faith and those like myself can now allow my immigrant story to reflect a future that serves to empower and heal other Americans in this great country. Turning our backs on immigrant and refugee populations would mean we are no longer willing to nurture others like myself who have a chance to grow and contribute to what makes America already so great. I ask you to please continue to fight tyranny and injustice by keeping the conversation going. We cannot allow this president and his administration to change the core American values that have been admired by the world through so many decades of exemplary practices of inclusivity.

Thank you for taking the time to read my story.