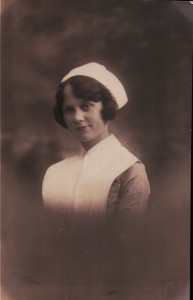 Doris Stoddart McDonald was born in 1907 in the small town of Colchester, Ontario, just outside of London. Her maternal grandparents were from Devon and her father was the first in his family to emigrate from England to Canada.

She always – from the time she was a little girl – wanted to be a nurse. After high school she entered nurses’ training at Victoria Hospital in London. Always adventurous, upon graduation she decided to leave Canada and move to the U.S. She found a job immediately at Harper Hospital in Detroit.

Doris loved her work. When she had time off she would walk to the drugstore located across from the hospital for a cup of tea where she became friends with the pharmacist. He had a good friend– another pharmacist– and arranged a date for him with my mother. He proposed on their first meeting and they were married exactly one year later in October 1930.

Mother continued her nursing in Detroit where she became a U.S. citizen during the second world war. She and my father moved to Florida in 1954 where my father died in 1970. Doris continued to live in St. Petersburg where she still did some nursing and also traveled both in the U.S.A. and in Europe. In 2002 she moved to Palo Alto where she died in 2003 two weeks before her 96th birthday.

This story was shared by Palo Alto resident, Joan Northcott.