From Cotton in England to a Store for Jockeys in California 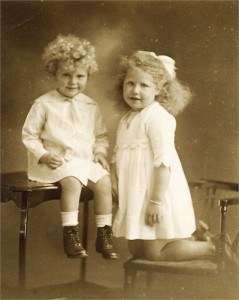 Mary Beth Train’s immigrant story is because of King Cotton. Her maternal grandparents arrived in the United States in 1920, with her mother, Winifred, age 6 and uncle, Geoffrey, age 4. They sailed from Liverpool, England to New York on the Corona.In England that family had lived in Colne, a small mill town in Lancashire in the northwest. Mary Beth’s grandfather sold insurance there, and her grandmother’s grandfather was a wealthy “provision dealer” (which may have included cotton) in nearby Smallbridge. Mary Beth’s mother remembers that the night before the voyage, her English aunts were terrified that they all would be scalped by “wild Indians”.Upon arriving in New York, Mary Beth’s grandparents settled in an Italian neighborhood in Brooklyn, and from there moved to Rutherford, New Jersey where her mother first experienced corn on the cob. Although her grandfather and his three brothers were to begin a small import company to ship clothing manufactured in British mills to the United States, they made their living instead as sales reps all along the East Coast.After the stock market crash of 1929, Mary Beth’s grandparents moved to Long Beach, California to be near her grandmother’s cousin. Around 1940, these grandparents opened a men’s clothing store in Arcadia, near the Santa Anita racetrack. The store catered to the racetrack jockeys and was highly successful in that niche market.Mary Beth’s mother, still a British citizen, transferred from Long Beach City College to the University of California Berkeley, where she lived at International House. It was there that she met a chemical engineering masters student who would eventually become her husband and Mary Beth’s father. Mary Beth’s parents, like so many other Bay Area students, chose to stay in the area after they completed their studies. Mary Beth has lived in the same Palo Alto house since 1972. Mary Beth’s paternal grandfather (Lannes’s father) came from Alsace in 1873, shortly after Germany conquered that part of France; he married his cousin, whose family had also come from Alsace in 1848. Since her father’s immigrant ancestors were involved in the cotton industry, they arrived in New Orleans, an international cotton factory and shipping hub before the Civil War and settled in Victoria, Texas, which has access to ports. During the Great Depression, Mary Beth’s paternal grandparents moved to Fontana, California by way of Los Angeles, where they had cousins. There, they owned a barbershop and bought land where they raised chickens and oranges.Mary Beth’s story is one that reflects the entrepreneurial and adventuresome spirit of immigration. Her ancestors set up quixotic ventures because they sought upward mobility, and they strongly believed that “anything is possible in America.”

This story was shared by Mary Beth Train.