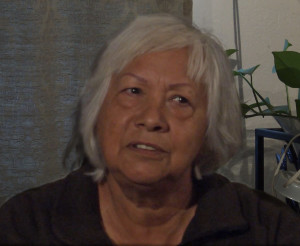 My name is Connie Cortez. I’m from Mexico, from Michoacán. My father, who was already here as an immigrant… I come from a town of immigrants. Everyone had to come to the United States because of necessity. My dad came and didn’t see me be born. He knew me through photos until I was 6 months old. Then he told my mom to come over here (to the U.S.). I have half brothers. I was here in San Diego until I was two and a half years old.

I was beginning to speak English. My mom didn’t feel comfortable with my dad, so she left him with his children, and she took her daughter back to Mexico….. to the Federal District to work as a maid. I was raised in the Federal District in Mexico in a very beautiful neighborhood called the Colonia Roma. It’s full of artists and it’s very bohemian. I like to paint, I like art. I attended elementary school there. I didn’t do a great career because my mom didn’t let me live off of art. She said I would starve to death.

I didn’t do a great career, but I did climb to very important positions. I was the first woman in Mexico to make firefighting equipment. It’s a suit similar to what astronauts wear to go to the moon. I made it with tears and with callouses on my hands. It is harmonized asbestos and fiberglass. I was able to have a position in which I felt comfortable and important.

I never wanted to see, or turn to the United States, because I felt that the United States stole my father. It stole my brothers. I had certain resentment. My mom said that her life here was horrible, so I didn’t want to know anything. I would say, why do people want to go over there? I couldn’t understand that.

He came to the United States to do what he couldn’t do in Mexico, purchase a house and have a business. And after there was a boy, a son of his, a grandson of mine who needed me. So he told me to come. He’s my only son so I had to follow him, even though I didn’t want to. I think that the ending to this story is good because that boy is healthy. I was important in that aspect of taking care of my grandson. For my grandson it was important.

But when I arrived, to help my son, I had to start working. What I was in Mexico had no value here. I had to be a maid here. I also had to suffer discrimination and injustices from employers. Not from Americans, but from my paisanos (countrymen) that are rich over here. Rich Mexicans sometimes become cruel.

And I suffered. I suffered humiliations that I wouldn’t have wished to suffer, that now when I see it in perspective I say it was worth it because my son is well, my grandson is well, the sacrifice was worth it. But if someone told me right now, here is your plane ticket so you can go to your homeland, I’ll leave! I’ll leave because life here is deceitful, it’s fictitious. However, I’ve wanted to take advantage of my time here to fight, to join groups, to always do something in benefit of ourselves. I’ve never discriminated because I know what that is, for a countryman to discriminate against you. I’ve never done it. And I fight so that people don’t discriminate against each other. And I fight so that this country is more just.

I’m delighted to be in SIREN now, but I’ve been in Catholic Charities, as a volunteer in the libraries, in schools. I’m always trying to do something because I believe that I am capable of more, even if that isn’t recognized here.