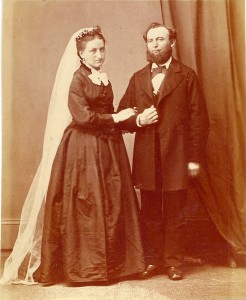 Christian Juergen Alpers completed a course of study to become a Lutheran pastor in Hermansburg, Germany and then, in 1875, immigrated to an area southwest of New Prague, Minnesota where about fifteen German Lutheran families had settled in the mid 1850’s. The school was one of several institutions sponsored by German mission societies, and the graduates were sent to locations where Germans had settled in South Africa and in the US Midwest. A Lutheran congregation had been organized in New Prague, in 1864 and a log church had been built.

Pastor Alpers married another German immigrant, Dorothea Heine, in 1876. They had six children. The first, Johannes, died shortly after birth. Then the twins, Dorothea Maria, and Maria Dorothea died of the diphtheria plague in or around the 1880s. Then my grandmother, Martha was born, followed by her sisters Hulda and Lydia. Both Hulda and Lydia went to “normal school” for teacher training. Both became teachers, and Hulda eventually became a lawyer, passing the bar in Nevada and California.

Alpers became a US citizen in 1885. His next parish was St. John’s of St. Clair, Minnesota. After becoming ill, perhaps suffering from depression, he became a farmer and owned about 200 acres in the area just east of Mankato, Minnesota. In 1910 he moved to Timber Lake, South Dakota to homestead land. The area, having been an Indian reservation, had, by way of a treaty just become available for settlement.

He died there on April 19, 1916. Dorothea, his wife, died in 1926 in Hot Springs where her daughter, Lydia had taken her in the hope she would regain her health. Dorothea is buried next to her husband in the Timber Lake Cemetery, but her name is not found on the tombstone.

This story was shared by Martha Meyer, a resident of Atherton, who is the great-granddaughter of Christian and Dorothea.