Children Left Behind from Vietnam War 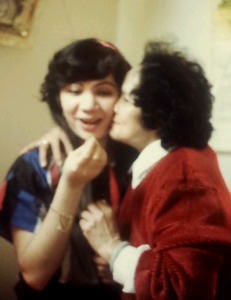 Being born during the controversial Vietnam War is not something that would have been pleasant. Immigrant Linda Le was one of those who was born during a time of great dispute in her country. Caught amidst the conflicts involving her country, Linda, along with her mom, resolved to leave their country. She had endured much during her trip from her homeland, Vietnam, to the U.S., which fundamentally shaped her into the person she is today. It wasn’t easy all the time; nonetheless, she continued to persevere and to live out her new life in the United States.

Linda was born in Saigon, Vietnam, to a Vietnamese mother and a German father, a trait that makes her different from most everyone else. In today’s standards, this characteristic would have made her unique, but during the time period she lived, all the other kids would mock her for it. There were times when she decided to take action because she had had enough. On one occasion, she even punched the boy that was teasing her. However, most of the time she  avoided the kids who bothered her. Although Linda was often teased for being half white, she had never even met her father, the side of the family from which she got her European descent. It was evident that Linda’s life was not always easy.

Linda’s dad, Jim, was part of the Air Force during the Vietnam War. He was fighting against the Communist North before she was born, but around the time of her birth, all evidence of who her dad was had to be erased or else she would have been killed by the Viet Cong for treason. Even without her father’s presence, she continued to live with her mother. Linda has tried to search for her father, but all of her efforts turned out to be futile. With the absence of her father and because of her American (German?) background, Linda said that, “She felt like she did not belong.” After the Communists had gained control of South Vietnam, they imposed strict rules against the Catholic community. Linda’s mom wanted her to continue in her studies of Catholicism, but with the Communists in power, learning more about the Catholic faith was getting harder and harder. According to ImmigrationToTheUnitedStates.org, “The communists detested these Amerasians, whom they regarded as contemptible half-breeds.” In 1983 when Linda was a teenager, Linda and her mom finally decided to immigrate to the U.S.

Leaving their homeland was another one of the hardships Linda encountered in her efforts to establish a new life. Linda and her mom left their country through an American emigration program which allowed for all the “Amerasians” to immigrate to the U.S. In 1983, Linda’s mom was interviewed by an American screener to determine whether she was smuggling a child into human trafficking through the emigration program. The interviewer asked Linda’s mom for her daughter’s personal information to make sure that the two were acquainted with each other. The interviewer pressured her and as a result, Linda’s mom failed the test and only Linda could go to the United States. Linda could not believe what she had heard. Then, she yelled at the interviewer for pressuring her mom to make her nervous. The interviewer immediately realized that the two must be mother and daughter. The interviewer complimented Linda’s audacity and allowed both of them to pass. If Linda hadn’t spoken out, things would be different today.
While leaving Vietnam, the two first went to a Filipino refugee camp for six months to learn English. Following their stay at the camp, they took a plane to the U.S., landing in Chicago, Illinois. Upon her arrival in the United States, Linda was very nervous. What would they do for a living? How would they get a job without knowing much English? These were some of the questions running through their minds in the United States. They knew they had to start their lives over in a new country, but now at least they had a life to live out.

To make a living, Linda would to go to school while her mom found small jobs. Linda went to Senn High School in Chicago, Illinois. This was where Linda would meet her future husband, Minh Le. While they were together, Linda’s mom made sure that Linda would finish high school and college before she could get married. After graduating from high school in 1989, Linda took additional years learning English in an ESL program. In addition, Linda went from one community college to another and then she enrolled in Loyola University. From 1993 to 1996, Linda went to Loyola to get a degree in Nursing. In 1995, when Linda was just about finished with schooling, she got married to Minh. In 1996, Linda graduated with a Bachelor’s Degree of Science in Nursing. With her mom’s health deteriorating, Linda decided to take care of her mom while working as a nurse.

As an Amerasian left behind from war, growing up was different and difficult for Linda Le. The United States was full of opportunities, so immigrating to the U.S. was an essential move. When Linda arrived in the U.S. with her mom, they had to start from the bottom to establish their lives in the United States. Upon asking Linda how she is doing currently, she replied, “I’m doing fabulous now!” In 2000, Linda had a set of triplets, and later in 2007, she had another baby boy. Linda considers herself blessed with her family. Linda institutes all the values she got from her mom in her children, values like the importance of family, education and faith. Ultimately, she hopes that she can give all her children a better future, a future that she could not have.

This story was written by Anthony Le, the son of Linda.