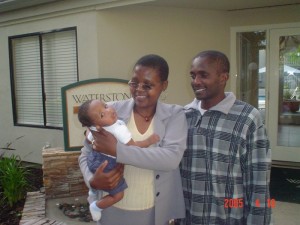 Arthur with his wife and firstborn son

Upon his arrival to the United States of America, one of Arthur Kinyanjui’s many curiosities involved a McDonald’s drive-thru. The Kenyan native was shocked at the sight of his host speaking into a black box that projected voice.

“Microphone?” he laughs today. “That was a big one.”

Although Arthur had been born and raised in Central Province, one of Kenya’s more industrialized provinces, he came from a culture completely different from that of America. “I was 26 when I came,” he says, ten years after he first set foot on Californian soil. “It’s been a ride.”

When he was still in college, the International Monetary Fund asked Kenya to scale back money allocated for the education budget. Arthur was studying to become a teacher; however, the financial cut down meant no government jobs were available. When the opportunity arose to participate in “Diversity Visa,” a lottery that gave winners opportunities to immigrate into the United States, he thought, why not? There’s nothing to lose.

Arthur grew up in a close-knit community, where it was easy to drop by friends’ houses whenever desired. He had never been interested in coming to the U.S. because he’d been adamant on not losing any money. “But my brother told me I should apply,” he recounts. “He was willing to pay for the posting.”

With his family’s blessing and aid, Arthur applied for the lottery but let it stray out of his mind. One long year later, he heard back.

In the meantime, Arthur had begun his teaching career at a rural boarding school where students were mostly from poor economic backgrounds. He was employed by the local education board to teach classes of 55-60 boys at a time. The job required him to stay on duty certain days per week to take care of students overnight. It was on one of these early mornings when the call came in from a family member. “Arthur, you won a green card!”

However, the money allotted by the lottery win was only used to satisfy the Green Card process. “It cost us a lot of money to actually get clearance, medical records, immunization and etcetera,” Arthur says. “The worst part was, the lottery officials lost the reply letter we sent in the mail.”

It took another year before they heard about the opportunity again.

“We thought we were disqualified,” Arthur says, “but we decided to go for one last chance and emailed asking about the letter we’d mailed.” Government officials informed Arthur of the interview letter mailed a year ago, one that never reached his doorstep, but also assigned a new date for the interview. “They asked simple questions,” Arthur says, “just making sure whatever we filled out in the forms was consistent.”

Airfare cost 200,000 Kenyan shillings, 2301.54 U.S. dollars, for two tickets. “It took family and friends coming together to get us here,” Arthur remarks. Soon, Arthur and his pregnant fiancée were on their way to America.

In America, two main observations caught Arthur’s attention: 1) it is easier for stranger to share personal stories and 2) life is busy. “We didn’t see each other very much,” Arthur says, referring to himself and his host. “We almost lost the social part of life. It was basically work and family.”

To start over as an adult in a whole new society was difficult, Arthur acknowledges. His childhood friends were back home; here, Americans had their own customs. However, Arthur did appreciate the level of security in the U.S. “We came here because there were more economic opportunities,” he says. “Here, there are no worries about anyone breaking in, and lots of conveniences are available, like health care, good roads, neighborhood parks, etc.”

Arthur started his new life by finding employment as a teller at Wells Fargo, as advised by his host. He also worked as a caregiver in senior homes for three months. Soon, Arthur found a place for his family and moved out of his host’s house.

One day, a friend took him to the Palo Alto Unified School District office, where he confirmed his degree certificate to district officials. He was offered a job as a student attendant at Palo Alto High School for a semester but became a certified teacher after he was cleared by the California Commission on Teacher Credentialing. Today, he teaches Social Studies at Henry M. Gunn High School.

“It’s expensive to visit,” Arthur admits, reminiscing about his childhood home. “We visit every three years but call close friends at least once a week.” Even so, Arthur and his family of three boys have established relationships with Kenyans around the area.

Although Arthur appreciates his journey from Kenya to where he is today, he is unsure about the future. “I would like to return to my country after my children have grown, but our young family was born here,” he says. “Life revolves around their interests.”

Nonetheless, Kenya never strays far from his mind. “I used to dream about Kenya at night,” Arthur says, “but when I opened my eyes, I would still be in the U.S.” Because deep down, Arthur knows, Kenya will always be his home.