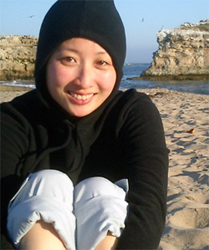 Angela “Angi” Chau was born in 1977 in Hong Kong. She and her sister were raised by their grandmothers while their parents were applying for a green card in the United States. Her father was fairly familiar with the United States because he went to college in America, but moved back to Hong Kong after graduating.

The main reason for the Chau family’s immigration was that Hong Kong was under British rule and they knew that China would soon want to take the city back. With a new government, people were afraid that Hong Kong would be changed for the worse. Because of this possible shift in Hong Kong life, Angi and her sister would have fewer opportunities than the ones that would be available to them in the United States. Her parents wanted the best for their children and wished to completely change their style of life to benefit them.

In 1988, when Angi was 11 years old, she finally moved to Florida, where she attended a small private school as to not be overwhelmed by the big classes and large school. Her old school in Hong Kong was very different from this new school. She says that the classes in her new school were more participation oriented, which in her opinion is “the better way to learn.” She struggled in classes like English and History because she was fluent in Cantonese, not English. This transition was a difficult time for her since it was a drastically different environment and therefore, she had to work hard to obtain good grades. However, she excelled in math and was 2 years ahead of her class, and she and her sister quickly picked up English. Her family stayed in Florida until her father received his PhD. They then moved to Houston in her 10th grade year, where she proceeded to live until graduating from Rice University with a BS in Electrical Engineering.

After 6 months of working in London, Angi moved to San Francisco and attended Stanford University where she got her Masters Degree in Electrical Engineering with specialization in image processing. In December 2011, she got her PhD in Bioengineering from the University of California, Berkeley. As of now, she works at Castilleja School, an all girls private school in Palo Alto, California, where she is the director of their engineering and programming lab. Students at Castilleja say that getting to work with “Ms. Chau” is exciting and interesting because of her bubbly personality and fun ways of teaching. She is always positive, whether she’s mentoring the middle school robotics, running the laser cutter, or helping students with individual projects. Her enthusiasm and stash of lego candy can make anyone smile. She still visits Hong Kong every year and enjoys spending time with her large extended family.