From Algeria to California – Mehdi Kaci

Mehdi was twenty years old, the only child in the Kaci family still under 21. This was lucky timing as it allowed him to qualify as a minor child and be a part of his parents’ United States Diversity Visa application. His older brother and sister would have to find another way if they were ever to emigrate to the U.S.

In 1995, there were 4.5 million qualified entries worldwide to the U.S. Diversity Visa (DV) program. Also called the Green Card Lottery, the DV began in 1990 and offered permanent U.S. residency to 55,000 people annually from countries with low levels of immigration to the U.S. and who could provide proof of a high school education, two years of work experience in an occupation that requires two years of training or experience within the past five years — both of his parents were qualified applicants.

Winning the Green Card Lottery – In 1995-96 when Mehdi Kaci’s parents applied, only 1,100 persons were selected from Algeria that then had a population of 28.5 million. It really was like winning the lottery. In June 1995, Mehdi’s parents told him that they were going to emigrate and had to get their paperwork together. The good news was that they had won the lottery, the bad news was that they had to take advantage of it immediately or forfeit their place.

Mehdi spent the summer of 1995 collecting his paperwork. He went to city halls, schools, and even the small city where his grandfather was born. His parents were collecting their paperwork at the same time, and some of it overlapped so they worked together. By March 1996, the three family members had left for the U.S.

Mehdi said that he had thought emigration to Canada or Australia might be a possibility, but had never even thought of going to the U.S. His mother’s sister had told his parents about the DV lottery, and when they applied and then won, Mehdi hoped and prayed that it would all work out. He had no idea what to expect by moving to the United States. All he knew was that it would be better than where he was.

Because life in Algeria could be quite dangerous, Mehdi did not tell anyone, not a single one of his friends, from that June until the following March. Finally, only a day or two before they left, he told one of his best friends.

There was internal fighting in Algeria at that time and to say that you were going to a Western country could have dire results. The Islamists had not taken power yet, but were very influential. You never knew what was going to happen. Scenes of warfare were continually played out in the streets with bombs going off in cafes and buses.  Police, intellectuals and doctors were being targeted and killed. Acid was sometimes thrown in the faces of women not wearing the hijab, a veil that covers a woman’s head and chest. There were gunshots at night and every person knew someone who had been injured or who had died.

Mehdi’s mother was the chief influence propelling the family’s emigration to the U.S. She wanted to get her family out of Algeria not only because it was dangerous, but also because there was very little economic opportunity for her children. Even today, 19 years later, youth unemployment in Algeria is sky high, and when Mehdi has returned there in recent years, his friends have told him that he “made the best choice,” and that they would like to leave, but cannot. 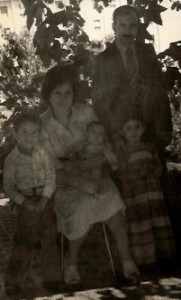 Mehdi as a baby in Algeria with his family

His mother was a French teacher for 20 years and then a high school director so leaving her main income stream behind would create financial difficulties for the family. It would be hard for her as a new immigrant to find an equivalent job in the U.S.  She would have to learn English as well as go to school to earn a U.S. teaching or administrative credential.  As a result, she and her husband continued to return to Algeria for the school year until her retirement a few years later when they settled year-round in California.

Travel to the U.S. was expensive. Even though both Mehdi’s parents worked — his father for a boat manufacturer — and they had a middle class lifestyle, buying plane tickets was out of reach. Fortunately, Mehdi does not know how, his mother’s sister who was living in Palo Alto, California, was able to help and bought their tickets.

Arriving in California – Mehdi and his parents came directly to his mother’s sister’s home in Palo Alto. His aunt had come in 1992 from France where she had been living and working. By the time Mehdi arrived, his aunt had married an American and they had bought a house in south Palo Alto.

It was evening on the first night and Mehdi went out for a walk over to a nearby park. Everything was so green, so quiet. It was very different from Algeria where the streets are narrow and filled with people and very loud with lots of motorcycles and cars.

Some kids were playing baseball and he sat down to watch. He did not understand the game at all and found it very confusing. Now, though, his wife is a Giants fan and he has really gotten to know the sport.

The next day, he went shopping at Piazza’s, the local market, with his aunt and when they came in everyone was saying “Hi” and “Good Morning” to them. He thought his aunt knew everyone and was very famous? He just couldn’t understand why everyone was so friendly.

Working and Going to School – Initially it was very tough. Mehdi had to find a job right away and his aunt helped him get one at a new café on California Ave in Palo Alto called Café Brioche. His aunt knew the owner very well. He washed dishes and was a sometime busboy.

There was something that was really fantastic – how helpful people could be. Mehdi began taking English as a Second Language (ESL) classes through Palo Alto Adult Education. When he would talk to people and make a mistake, people wouldn’t laugh, but actually would correct him and try to teach him how to say something properly. It was great! Their next question always was, “Where are you from?” Algeria!

Mehdi knew little English when he arrived and that which he knew was from listening to music such as the Beatles, pop 80s music, Queen, Rolling Stones, Guns N’ Roses. He really tried to make sense of the words, but it was hard, as anyone knows who has sung the wrong lyrics to a song for a lifetime.

About five to six months later his brother Malek came to the U.S. and they got an apartment together. Malek took Mehdi’s job at Café Brioche plus at the restaurant next door called Joanie’s. Because Mehdi’s English was slightly better than Malek’s by then, he went out and found a new job.

He actually found two jobs as they had rent to pay. Mehdi worked as a waiter for one job in the morning and another in the afternoon. He worked for the Sicilian restaurant Trattoria Buon Gusto in Menlo Park and at Piatti’s in Stanford Mall. All in all, he worked 11 years in the restaurant business.

About one-two years after coming to the U.S., Mehdi began attending Foothill College and working at night. He was mostly studying English, but also math and physics thinking it might help him get a job as an IT engineer in Silicon Valley. By 1999-2000, IT jobs were starting to leave the area in the first wave of outsourcing. Then, in 2000-01 the dot com slump hit the industry causing even more job losses.

Mehdi thought he should change his major and tried out a political science class that fortunately connected him with a professor who had greatly influenced him. Coming from Algeria he never thought about majoring in political science, it didn’t make sense. In Algeria, there was no contributing to the conversation, debating an idea or thinking freely about the reading selections. It was ridiculous to ever think that classes could be like that in Algeria. But, here in the U.S., it was so different. Mehdi continued to take Political Science classes as he really enjoyed them and was fascinated by the subject. He changed his major, took all the required classes, transferred to San Francisco State University (SFSU) and aimed for a B.A. in International Relations.

For about four years, day-to-day, month-to-month, year-to-year, Mehdi went to school and worked nights. During the summer when there was no school, he tried to get more work shifts from his employer. In most cases they understood – when you asked nicely, they would say, “Oh, of course.”

Citizenship and Siblings – As soon as he became eligible Mehdi didn’t wait a single day to apply for a Green Card. In 2001, he applied for citizenship and because he was a Political Science major, he easily passed the 10 exam questions. He became a U.S. citizen in July 2002. 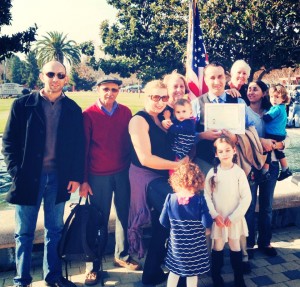 Marriage, Graduation and a Job – Around the time that Mehdi started at SFSU, he met his wife Rachel who was also from Palo Alto. He graduated in 2007 from SFSU with a B.A. in International Relations, and got a job with Cisco Systems. He had started there working a six-month contract translating a set of legal documents from French to English, plus cleaning up some Excel worksheets. From there he moved from group to group to his current position in 2014 as a Program Manager in the Worldwide Partner Organization. 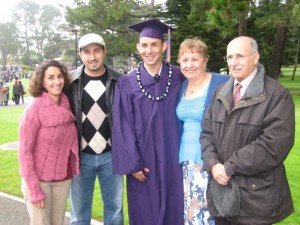 Mehdi graduates from SFSU surrounded by his family. 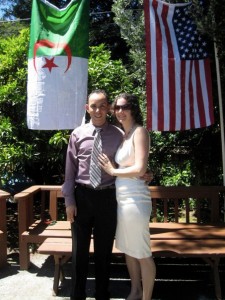 Wedding of Mehdi and Rachel

Algerians in the U.S. – There is now a larger community of Algerians in the Bay Area than when Mehdi first came here, but it is hard to know how many. Conditions are less than ideal in Algeria today with many younger people hoping for better economic opportunities. Mehdi would like to see U.S. Algerians give support to their former country for better lives for their friends and family still there.

Mehdi Kaci’s story was told to and written up by Carolyn Williams.