MYSTERY OF THE MISIDENTIFIED PASSENGERS

The Statira Morse ship left Glasgow in May, 1852 and arrived New York City on July 13, with 307 passengers on board. It had taken 8 weeks, with two men and three newborns dying on the passage. J. G. Lawton, shipmaster, swore that the list of passengers was correct, but at least one family is misidentified. 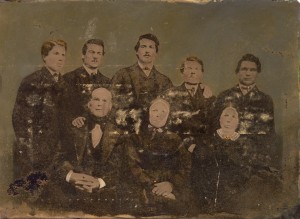 On the manifest was entered Alexander Ormiston, 42, miner, Scotland, followed by his family: Jeane, 46, wife, born in Scotland; and their children, Christina, 16; Alexr, 14; James, 9; William, 7; John, 5; and Andrew, 3, all born Scotland. However, they all should have the surname of Pollock. Alexander’s mother’s name was Ormiston–no one in the family knows why the record shows the family with the wrong surname, Ormiston instead of Pollock. Were they running away from something? Wanted to cover up their exit from Scotland? Or did the captain just write the wrong names accidentally? Pollock was a miner and he had the same children with the same ages, and a mother with the maiden name of Ormiston, so it has to be the same family.

Eventually, all the Pollock sons were to work in the coalmines of Tioga County, northern Pennsylvania. The Pollocks helped start a Presbyterian church in the Fallbrook and Arnot communities there, the children married and had children in that part of the world, but the grandchildren scattered. The son James was my great grandfather, who followed in his father’s footsteps to become a mining superintendent, and fathered my grandfather Anson Samuel Pollock who would also become a mining superintendent. My father, James Archer Pollock, broke the sequence by attending Penn State College and becoming one of the first chemical engineers in the U.S.A. He spent most of his life with the synthetic rubber industry.

The family story is that the only Pollock daughter, Christina, fell in love with 21-year-old Peter Cameron who was also aboard the same ship and helped them through their seasickness, and married him a year later. However, when I finally found this family on the Statira Morse ship, there was no Peter Cameron listed on the manifest. The Camerons immigrated several years before the Pollocks and also were miners. I found them in the 1850 census of Tioga County, and the Pollocks didn’t come till 1852.

I walked in the footsteps of Alexander Pollock and his wife Jean Findlater through Glasgow, Stirlingshire, and Lanarkshire on two trips, examined the parish and other records in the Edinburgh and Glasgow record houses, and scaled walls to take pictures in old graveyards.

I know that Alexander’s parents were James Pollock (1775-1831) and Christine Ormiston (1783-1840), and grandparents were Alexander Polick and Jean Donaldson. I found records for three more generations of Pollocks before them and an indication that the Pollocks were part of the Maxwell clan, with a crumbling castle called Calaeverock in the borders country. I found a lot of Pollocks in the Paisley Abby church of Renfrew, Glasgow, and there is an elegant Pollock House that we toured in Glasgow. There is no indication that our family were related to Lord Pollock—they were of the laboring class. 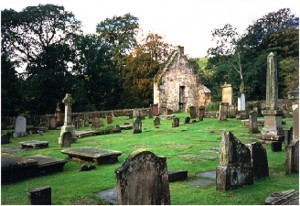 The ruins of St. Machan’s Church and surrounding cemetery 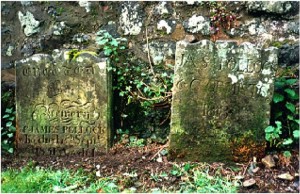 James Pollock and Christine Ormiston stones in the cemetery 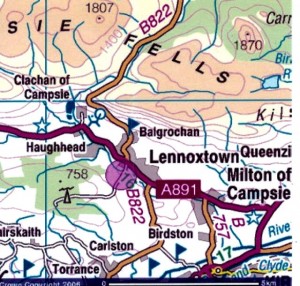 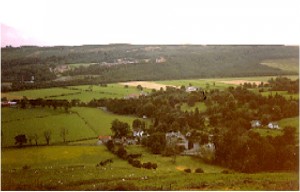 Campsie Glen in picture taken from the Campsie Fells (hills)

Campsie originated as early as 1,200 AD, first called Camsy, then Kamsi, then Campsy. It is said that it was a Gaelic word, cam sìth, meaning crooked hill or hill range. Campsie Fells are the treeless hills to the north of the hamlet where sheep and cattle graze.

The family always considered their roots were in Campsie. However, I discovered that Alexander’s father James Pollock lived in Renfew, Glasgow before he went to Campsie, and was a cotton weaver and laborer before becoming a collier (coalminer). Counting the children who died young, Alexander was one of nine children of James Pollock. In a birth record, James was living at Rowantree Faulds, which were tiny cottages all in a row outside Lennox Town along the main road. It looked like the family of 11 lived in only one room. 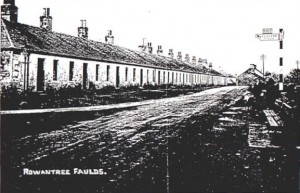 It was tricky to track the Ormistons because there were many spellings: beginning with A or O, with or without an “ing” in the middle, or “stone” at the end. Because there are children in the immigrant family using a middle name of Marr, I think her parents are Alexander Ormiston and Christian Marr, from Gorbals, Lanarkshire. He was a handloom weaver. In the early times before 1800 many of the people around Glasgow were in the cotton fabric business—with some working in bleachfields, some weaving at home, and some working in the Lennox Cotton Mills. I toured a cotton mill at Lanark and it was a good place to develop respiratory problems with all the lint in the air. However, the workers were furnished with schooling for their children, which was an innovation at the time.

Our family still has the little brass oil-wick lamp that we suppose Alexander wore on his cap in the mines in Scotland. The lamp was filled with oil and a wick stuffed in the spout and lit – the flame gave just enough light for the miner to see in front of him. The other side says A. Caldow, Kilmarnock, the lamp manufacturer.

Alexander was an experienced miner when he arrived in Pennsylvania, as he had worked in colleries in Lennox, Passover, Gartsherrie, and Gartgill—all near Coatbridge, Lanarkshire. He quickly became foreman at Fall Brook, Pennsylvania and retired as superintendent.

But why did he come incognito to the U.S.A.?