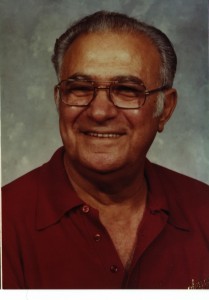 My mother’s father, Alex would tell us that he came from Lebanon. Other times he told us his family had lived in Syria. When pressed to pick a country, he looked confused.

He came to New York when he was eight, with an older brother and his mother. Within two years his entire tiny family in this country died. His mother earned money by doing laundry and making lace,she became ill and was cared for by her neighbors, though never saw a doctor. Alex’s older brother John died of a broken arm which became gangrenous. It seems he didn’t have benefit of a doctor either.

Alex somehow made his way to a large Lebanese family in Ohio who cared for him, though they were not in fact, related. He was not formally educated but learned how to make and repair shoes which was the business of the family he lived with. When he was 16 he met and married my maternal grandmother who was 15 at the time. He went to live with his bride and her parents, though it was several years before they ever shared a room, I’m told. They remained married their entire lives.

Alex loved to work in leather and made shoes for Barnum and Bailey Circus Clowns. ( My mother wore a pair of these shoes when, as a clown, she entertained senior citizens) Mostly though he worked in his shoe repair shop and in his garden, he made jewelry out of sea shells, holiday decorations from found objects.

I think my grandfather did not like to remember how he left Lebanon/Syria, we never knew anything about his father beyond “dead”, which, in my family, could mean anything. He became vague when asked questions, and we knew eventually, not to ask.