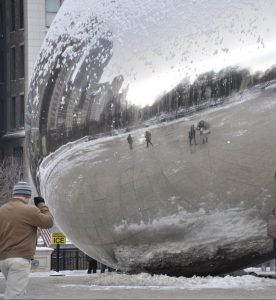 Coming from Argentina to Chicago, there was a big weather change but nothing my parents couldn’t handle.  They migrated to Chicago to start their own family. There was not really a plan.  My mom and dad were only in their early 20’s. It was in the 1950’s, so segregation was still going around. When they arrived in Chicago, they got on a bus, and on the bus my mom experienced how the African Americans were forced to sit in the back. In that moment, my mom realized that she would have to fight for her beliefs as an immigrant. She knew that there was a long path ahead of her before she got her freedom.

My parents had no idea where they would find a job or home, but they made it work. My mom was the first to find work as a secretary. In Chicago, they experienced the brutal freezing winter; they did not exactly have that type of weather in Argentina. They missed the tropical climate in Buenos Aires. They missed their life before.

My mother didn’t speak any English, but luckily my father was bilingual. My father was raised in a British Catholic boarding school. He was an orphan since he could remember.   My mom knew that if she wanted a job outside the home, she would have to learn how to speak English. Knowing it was going to be a difficult task, she worked harder than ever to learn English. She would practice at home with my dad  until she got it right.

My mom was considered the breadwinner in the family until my dad found a job. When he found work, my mom gave birth to my older brother in Evanston. They didn’t argue much, but the weather took a toll on their mental state. They never adjusted to the windy city  and they decided to look for a new home. My mom shadowed my daughter as they jumped back and forth from Chicago to Argentina, then to Colombia to California. They finally planted roots in Los Angeles. My father found work elsewhere, and my mom stayed with my older siblings and I in Los Angeles.

My mother had a voice in our household. She was my father’s equal.  My mother taught me how to lead through her love, devotion, and her persistent actions. My mom would cook and clean. My mom also taught me the right path to freedom. My mom had this saying, “Money is security and independence.”  Those words laid the foundation. Providing us with a loving and safe house, while hoping for a better life.

As me and my siblings got older, my mother decided she wanted to own a business.  My mother loved antiques and had a passion in collecting beautiful things from her parts of the world. She began to sell her antiques in a small shop, and her name slowly became known in the community. Her dream was finally coming true, there was no one who could tell her that it was not. My mom had a voice that was helpful in the world and a purpose.  After moving for so many years, my parents finally found a sense of place.

This story was written by a family friend of the immigrant, a student in Palo Alto.