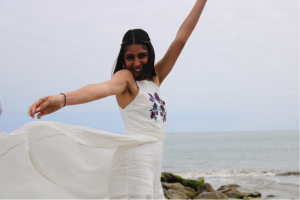 I raise my shaking hand and unwillingly press my cold finger tip against the metal trigger and hear a faint bell inside. I then hear footsteps in the distance approaching the door and the handle begins to turn. The door squeaks open and I am greeted by a semi familiar face, blissfully saying “Hi!”

It’s Sizdah Bedar, Nature’s Day, but we were meeting at Diana’s house before going to the park. Diana is wearing an elegant yet casual green dress. My heart that was once racing has since slowed down and I am again able to look forward to the celebration. This is the opportunity where I can finally spend time with other Persians. Sizdah Bedar is a cherished holiday for Persians, the thirteenth day of the new year where you spend time in nature. I hope this day will bring me closer to other American Persians and that they will be the ones who are able to understand me better through the common celebration of our culture. Although the people at school are really caring and open-minded, I feel as if a deeper relationship is missing. Maybe this would be marked as the day where I could begin to feel like America was my home.

Ever since I left Iran, I had never really felt like myself. Not that I had become a different person now that I live in America, I just felt a lot of pressure to assimilate. I always feared being different, so naturally I had hidden things from my classmates that would make me stand out. An example of this would be not raising my hand in class when I had an opinion on something, because I was self conscious of my different perspective, and thought people would look at me as though I was an outsider. Maybe this event would give me the opportunity to open up and share the side of me I have kept inside since moving to America.

After walking in Diana’s house and looking around, I instantly felt warmth in my chest and a welcoming sense of home. The soft and colorful geometric rug underneath my toes and the two green couches before me seemed like something right out of my neighbors house from Iran. Simply the presence of my culture, something as simple as furniture, boosted my mood and allowed me to feel more confident. I couldn’t wait to be immersed in my culture with the possibility of making lasting friendships.

After waiting for a few people to arrive, we were on our way to Vesona park, the place where we’d picnic and listen to music. Stepping out of the car at the park was a magical moment, the faint Persian music in the background and large groups of people gathering together to celebrate a common holiday reminded me of Iran, the place I still called home. We found the most perfect spot in the bright green grass to place our big blue blanket. All of the food went on one side and the designated “seating” was on the other along with some games to play.

As the day went on, the conversation amongst Diana and I became more and more relatable. I never would’ve thought in a million years that I would be this similar to someone who was born in America. In Iran, Persian Americans are always seen as “different” and “less” cultured. So I had a preconceived opinion towards her and was pleasantly surprised. Whether it was as simple as the similarity in lunch food, or the complexity of our parents strictness, we were able to understand each other struggles. I originally thought I was the only one with those struggle, because I was a Persian immigrant, and shortly into the conversation I learned how prevalent the feeling of shame is. Shame from your parents for not achieving their goals for you that seem unreachable, shame from your “smelly” food, or shame for “obnoxious” music. The celebration went on and we became an American pair like peanut butter and jelly.

Fast forward a few weeks, as I sat on my bed with my phone in my hands, thumbs moving across the screen like a tiger running after its prey. My mom had just knocked on my door with her delicate yet stiff hand and told me she was planning a trip for us to go back to Iran. My jaw had instantly dropped and my eyes had practically bulged out of my sockets, I couldn’t have been more excited. My hands then naturally reached for my phone and I started texting Diana and Isabella about the news. Now looking back, I am surprised I texted them first and not my friends from back home. Perhaps my relationship with Diana and Isabella was more genuine than I had realized at that moment. After the few months into the move, I had began to lose touch with my friends from Iran, and it started to seem like we only sent the occasion “I miss you” text. It was never a consistent conversation that was meaningful, they were fake.

A few more weeks pass by, and the pull from my seat belt holds me down in my chair as the loud thump of the plane hits the cement. The moment was straight out of a movie, the landing made me feel grounded yet a weird feeling fell upon me. Something was off. After landing in Iran before, after trips and things, I was able to take a breath of fresh air. But now it feels like I am breathing different air. However, the air hasn’t changed, I have. The feeling of being a different person hit me again, except this time it isn’t a negative change. The different feeling is due to the vast variety of experiences I have had by living in America, and the struggles I have been through to find my identity while being able to share who I am with people who care. It took me a long time to be able to realize that, but as I predicted, Sizdah Bedar marks the day where I was able to open up and share my full self in America. Because of that journey, I have grown in ways my friends from Iran wouldn’t understand, and I didn’t need to see my friends to know how different our lives had become. I zone out when looking through the window as we are pulling up to the gate, thinking about what Iran means to me; an undefined home, a second home, a home away from home? Iran is the place it all started. The ringing of the fasten seatbelt turning off breaks by gaze and I am brought back to reality, where I can finally say I found a new home that feels like home.

This story is based on an interview by Alex Strathearn, a student at Palo Alto High School.