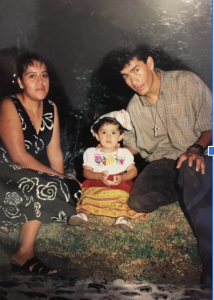 I am from teavana in my favorite jarrito’s mug but that’s not how my original story started. I was a 4 year old leaving Mexico and migrating to Chicago, IL knowing I had family waiting for me and my family was ready to start a “new life” as everyone calls it.

My story starts in a small Mexican town outside of Mexico city. I lived in my great grandmother’s house where she had chickens and lots of plants. I remember specifically running around freely barefooted. Everything in my 4 year old mindset was perfect but in reality my parents were having financial problems that a 4 year old wouldn’t have ever imagined. My parents were influenced by stories of money and wealth in the United States by family already living in the US. My parents decided to take an adventure and see what it was all really about. With the help of my grandparents that had already made the journey to the United states, we packed all the things we could carry on our backs and made our way to the US. My parents were eager for the journey because we had a mindset of staying in the United states and earning good money, but that journey didn’t just stop there.

During our journey we traveled to the northern Mexican border and attempted many times to cross the US through the desert. Guided by “coyotes” we attempted crossing in the middle of the night but we failed many times. As a 4 year old I thought we were going on very long hikes and I remember my parents would always carry me on their backs. I would playfully kick the thorn bushes and cactuses to cause some type of entertainment and it wouldn’t just be a super long hike in my perspective. What I hadn’t realized was that we were trying to cross for over a month and that we had very little food and money left. The thorn bushes had shredded all our clothes and we waited in the group homes for the next time we could hopefully cross.

In our last night in the group homes I sensed my parents stressed with the thoughts of “nos regresamos a casa” or “ay que tratar lo una vez más” because our future didn’t seem as clear anymore nor how we pictured it. We decided to try it one last time and it was by far the hardest journey we had to endure. We walked for over 14 hours in the desert mostly trying to avoid la migra or farmers with guns that were trying to hunt anyone down.

Finally we arrived at the group home in the US. We felt a sudden sense of relief but were still not prepared for our next stop which was Chicago. In order to reach our next group home my family and other immigrant families had to hop into a tacoma trucks to avoid looking suspicious.

We were all sitting in the backseat while my mom pretended to be the “coyotes” wife. My mother was carrying my little baby brother in her hands while I was sitting under the backseat like a pretzel. I remember my baby brother crying in the arms of my mom and the “coyote” saying “calla a ese niño” and my mom rocking my brother side to side trying to make him hush. My baby brother would still not quiet down and the “coyote” slapped my baby brother across the face. My mom got super furious and told the “coyote” to pull over and to let her move into the other tacoma truck. My family and I finished the trip in the second tacoma truck, we arrived at another location where my uncle and my grandpa were there to pick us up and drive us to chicago. We drove for a couple days and finally made it. We then lived in Chicago for a year.

I started preschool in Chicago and I didn’t know any English like the other little kids in my preschool. I had a pretty okay transition because teachers were bilingual and the preschool only lasted half the day. My mother didn’t work, only my dad, uncle and grandparents worked. After a year due to the lack of jobs and opportunities we moved to Memphis Tennessee. In Memphis there were not many latino people and it started to be a growing city with latino people. All schools were in English and my parents and grandparents worked so I didn’t have many resources when it came to needing help with homework since it was in english. My parents would put cartoons on for me in english so that it would be easier for me to learn the language that way. I remember my parents dropping me off at school at 6am and wouldn’t pick me up until 6pm while I was in the after school care.

I was always a quiet kid and very observant when I saw kids running away from their parents because the only thing I wanted was to hug my parents after a long day of not seeing them and not run away from them. I then noticed that it was just a cultural thing because they all had to be left alone. I slowly learned to cope with school lunch as well since I wasn’t used to it. I never had cold plain milk and that’s what the school would serve for breakfast. My mother would always warm up my milk and I realized it was just another cultural thing. I was also bullied for the food my mom would pack me for lunch. The other kids would always pick on me because my food always looked different from theirs. I then started to not eat my food and leave it in my backpack because of the bullying and my mom started to notice that I wasn’t eating my food and that I was hiding it as if I was ashamed of what she was cooking me. I eventually got over it and just continued to be me and enjoy my Mexican food because I realized I was privileged to have the food I was given by my parents and that I shouldn’t be ashamed of my culture’s food.

I mainly remember going to school and hiding my identity. I always believed I was living 2 different lives, I was a student doing my homework and studying while also helping my mom clean houses and go to work with her but my teachers didn’t know that side. They thought I was a full time student and child but I was also working at a very young age. Eventually I was able to work my way through school. 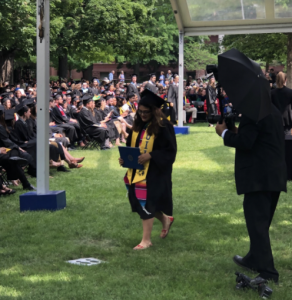 I got DACA and I got to work legally and have a social security number. I got into college and got pretty good financial aid for college. I wasn’t only accepted but I could actually go to college without financial problems.

This is where I met Leo my husband and I didn’t have to explain myself to Leo it was like we instantly clicked. He completely understood me. He knew being an immigrant and being a student was a tough job and it wasn’t something easy someone goes through. Even though my life as an immigrant has been difficult and full of obstacles it has helped shape who I am as a person. I have now realized that I’m not just an immigrant but I am Amairany Fuentes.

The interview and narrative were done by Shayla Valladares, a student at Eastside College Prep School.