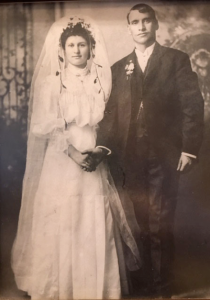 Prologue:
Battle of Caporetto, Italian military disaster during World War I in which Italian troops retreated before an Austro-German offensive on the Isonzo front in northeastern Italy, where the Italian and Austrian forces had been stalemated for two and a half years.

October 1917 saw the Italian army’s disastrous defeat at Caporetto and its eventual retreat into the distant Piave River region. To reinforce this line the Italians withdrew all their troops from the Dolomites farther south, near Monte Grappa. The disintegration of the Hapsburg monarchy was swiftly nearing in October 1918: hunger, equipment and munitions shortages and disheartened soldiers coincided with a definitive crisis in the multinational army. The morning of October 29, Italy launched its final, victorious offensive and a cavalry column rode into the town of Vittorio Veneto. The Austrian high command was forced to accept the conditions of the armistice on November 3, 1918.

The narrative of my family’s immigration commences in the dark of night on October 1917 with a terrifying knock on the door of my father’s home in Cavaso, Italy near Austria, by armed Italian soldiers; Austrian troops had overcome Italian fortifications in the treacherous terrain of the Dolomite Mountains leaving the family with scant moments to evacuate. Lacking motorized conveyances, the family retrieved a few meager possessions and were instantly refugees of war forced to walk miles in early frigid storms. My father’s grandmother perished during the harsh ordeal.

Escaping the unrelenting maelstrom of WWI by way of France, my father Girolamo and his brother Carlo eventually arrived in America at a propitious time, 1920, the dawn of the exhilarating Roaring 20s. Even through the arduous Depression era Girolamo continuously managed to acquire employment in San Francisco or in the lumber mills of northern California. It was following the crash of 1929 when he first met my mother Carolina on North Beach’s Green Street in San Francisco. She was however already married, but for scant time longer as misfortune would intervene. Late one summer Sunday, perhaps after indulging in immoderate libations, my mother’s husband boarded a car with several friends in Wheatland, CA and never saw that fast-moving steam train at the crossing. Carolina usually found herself attending these Sunday excursions, but on that Ill-fated date Fortuna prevailed to leave her a widow absent from the horrors that day.

My father often related engaging tales of early 20th century America. A favorite was when he and a group of immigrant men would embark on ferry boats plying back and forth between Oakland and SF prior to the Bay Bridge. The men, accompanied by the consummate accordion playing of my Uncle Carlo, would spend the entire afternoons on a ferry singing cheerful Italian songs which repeatedly captivated a substantial audience. As the ferry arrived at its terminus there ensued a madcap scramble of people dashing back to retrieve cars…. such joy of music enriched the afternoons of many. 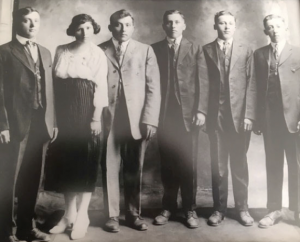 Girolamo dearly embraced America and never entertained a return to Italy. He frequently shared accounts of his Atlantic voyage and the joyful sight of the Great Lady in New York’s harbor bearing the torch of welcome. With all the gifts I offered him through his life, the finest one ever imparted was discovered in a dumpster of all places; a large pristine American Flag. As I presented the flag to him, his eyes lit up as no other offering had. He proudly displayed that flag in front of our home every 4th of July and his birthday to the end of his days.

On the matriarchal side, my grandfather, Lorenzo Mattioda, arrived from Castellamonte, a village in the Piemonte region of Italy near the French border, and my grandmother’s parents from the same province. My grandmother, Marianna, and her family settled down in Pueblo, Colorado where she was born and later met Lorenzo. In the late 1800s life in this remote western mining town constituted an unbridgeable divide to modern times. Marianna at 14 years age married Lorenzo of 27 years. Shocking? Perhaps, but in the late 1800s not unusual; her wedding photo depicts a mature woman beyond her teenage years. Pueblo then remained the Wild West as Marianna often recalled, in her humorous manner, the weekend gunfights with the occasional body lying in a back street. In my childhood, Marianna and I enjoyed countless western programs in television’s early days.

During the WWII years in my hometown of Susanville, CA, the US Army depot of nearby Herlong hosted a POW facility of Italian soldiers. These ‘prisoners’ were provided numerous accouterments absent from nearly every POW facility of WWII; even art classes. These ‘prisoners’ were accorded freedom to attend town church services and often found themselves enjoying a Sunday meal with many of the resident immigrant Italian families. One soldier married a local girl. They perhaps were accorded more humane treatment than US Japanese citizens forcibly consigned to internment camps.

An opportune segue to my maternal uncle in Walnut Creek with a Japanese neighbor forced into an internment facility; the neighbor turned over his home and possessions to my uncle John, who took lovingly good care of the home and graciously returned everything to his dear friend at war’s end.

As a child I possessed no thoughts how precious it would later be to have been raised in such a rich culture of splendid cuisine, music, and goodness. One wedding persisted for 4 days in joyful celebration. And what child would be offered Zabaione, an exquisite Italian dessert made from egg yolks, sugar and Marsala wine for breakfast?

I have been truly blessed.

This story was submitted by Lorenzo Antonio Favero.