Wrestling with Cultural Differences (The Netherlands) 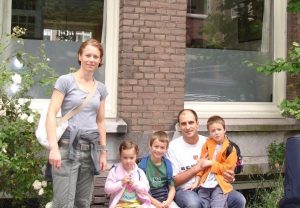 Angelique Dittrich immigrated from The Netherlands to America in 2008 because of her husband’s work. This picture shows Angelique(left) with her husband and kids shortly before moving.

“I just got offered a new job in Boston,” my husband said to me.

“Well then when do we leave!?” I asked him as a smile ran across my face. America was an adventure that had been waiting to happen. Having lived in the Netherlands for most of my life, I knew America would be different from what I was accustomed to. My husband is American which makes our kids half Dutch/half American. Since our kids had been living in the Netherlands their whole lives, they had not experienced the other side of their ethnic culture. That is why when the opportunity of moving to America presented itself to me, I did not hesitate to pack our bags.

The day before leaving, I took my kids to the playground for what I knew would be the last time. They ran off as they always did wanting to play soccer with all of the other children. Taking the kids to the playground was one of my favorite things to do with them. There were no real rules or restrictions; at the playground, the kids could be kids and play all day without adults to tell them what to do. My sons got into a soccer match with some of their friends that were already there. They ran from one end of the field to the other, putting everything they had into scoring for their team. One of my sons tripped over one of the other boys and claimed, “That’s a foul we get a free kick.”

The other boy snapped back, “You tripped yourself! that wasn’t my fault!” as he walked up to my son. Suddenly they grabbed each other’s shirts both attempting to throw the other to the ground. I didn’t like to see my kids fighting, but I thought to myself, if I step in and break it up then they’ll never learn the consequences of fighting. Because of this, I didn’t intervene and I let them fight it out until eventually they got tired. They compromised that my son would get the ball back but not a free kick and then kept on playing.

The next day was a sad one. The kids all said their goodbyes to all of their friends and we said goodbye to the rest of our family. The thought of leaving behind our everyday life in The Netherlands brought tears to all of our faces. However, it was time to start our new journey with new people and new places.

When we got to our new house the kids instantly loved all the space they had in a suburban household with three stories, a basement, and a huge backyard with a pool. This was nothing like the apartment we had had in the middle of Amsterdam. My husband started his new job and the kids started their new school. It had a playground and a huge field where I figured they could play forever just like they did in Amsterdam.

For the first couple of days, the kids played on their Nintendo DS’ instead of playing like they usually do, so I took them to the playground. I decided to stay with them the first time as I didn’t want to leave them alone at a place which was then still foreign to us. I remember that one of my kids was using the swing when another kid wanted it too. I didn’t intervene in the situation as it was just another lesson that my son had to learn. My son and the other kid were mad at each other and both wanted the swing to themselves. My son’s face turned red as he threw his fists into the air. The other kid mimicked this and then they started to fight it out. Suddenly, the other kid’s mom ran onto the playground and yelled, “Stop it! You two should not be fighting! You two are terrible and should be ashamed!”

The kids both stopped fighting and my son sprinted back to where I was as tears ran down his cheeks. Why did she scold them they’re just kids being kids I thought to myself.

“Why are you crying?” I asked my son.

“I want to go home!” he pouted as the tears kept flowing. He looked like a baby that got his candy stolen from him. Seeing my son like this made my stomach drop to the ground. The place he had loved his entire life had just become like everything else: controlled by adults with no freedom to do what he wanted.

In the middle of only their second week of school, I heard our home phone ring. I picked up the phone and heard, “Your son has been too rough at school today.” The next week I got another call in which they said, “Your child has been a distraction during class as he keeps poking other kids.” Every time the school notified me of their poor behavior it made me more and more sad. The things they had learned to be normal and okay in The Netherlands would now get them into trouble. It was not fair to them to get in trouble as much as they did as they had not been taught that what they were doing was wrong. I worried that they would always be seen as troublemakers and that that would give them problems for the rest of their lives; thankfully that wasn’t the case.

As time went by, the kids naturally became more accustomed to how the American children acted. When I took them to the playground many months later, I observed that they did not play rough anymore. My son was playing touch football with some of his newly-made friends. My son got the ball thrown to him and he ran to the side of the field and into the end zone. I heard one of the other kids say, “That doesn’t count you stepped out of bounds.”

Oh no, I thought to myself, he’s about to wrestle again and get into trouble.

My son took the ball, walked back to where the other kids were standing and replied, “Okay then it’s second down.” He tossed the ball back to their quarterback and the boys all went back to playing. A smile formed across my face and my heart felt warm. I realized that all my sons needed to get adjusted was time. Just like in The Netherlands, they did not need me to step in and help them because they could figure it out on their own.

This story is based on an interview by Jurgen Dittrich, a student at Palo Alto High School.