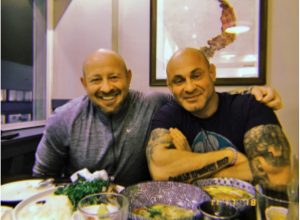 This is my dad on the left with his brother (my uncle) next to him at a family dinner.

Jumping through a train window, scared that it was going to leave without his brother making it through, Arthur Abezgauz was a teenage immigrant fleeing Russia in  the 1980’s with his family due to religious persecution. Their plan to make it to New York  wasn’t so simple. He explained, my grandmother had met this group at church that helped people evacuate Russia so they wouldn’t be jailed or killed because of their beliefs. She brought up the idea to her husband and without thought and being so desperate to leave they decided to do it. Russia was cold, unforgiving, Communist, and  not a Disneyland for a child to grow up in. They wanted a better life for their children and be able to provide more opportunities than they had for themselves.

The big city filled with hopes and dreams, New York. Not being able to make it to  California yet because they had no money, the next several years would be spent in New York. My dad described it as the “worst and best times of his life.” When I asked  why it was the worst he explained that my family was homeless, stealing their food, not  doing well in school, very low wages, horrible working conditions and more. This made me feel helpless when all I could think about is myself being in that situation and not  knowing what more I could do.

On the other hand, when asked about the best times he went into depth about how it bonded him to his brother more than he could’ve ever imagined. I felt  the compassion and love when he talked about caring for him and looking out for him  like he was his own child. It was looking like things had really started to settle down in  New York.

Fast forward to a couple years later, we’re heading to sunny California! My  grandfather got a job as an engineer at USF. It was time to get settled. My dad and  uncle got into USF and this opened up the opportunity for a better education and high  career goals that they weren’t given before.

When I asked my dad “ What were your  career goals or aspirations” he simply replied “I didn’t have any. I was so focused on making sure your uncle grew up okay and had enough to eat and wear that I never got the chance to focus on that until the opportunity came to light.” He ended up getting a bachelors in science and sports medicine but met my mother in college where they ended up having 3 beautiful kids.

As I sit back and reflect, it brings sadness but also happiness to me. Sadness due to how much my parent and my family had to struggle due to being immigrants and how much he was able to achieve and provide. The happiness comes from the  bond my father and uncle hold to this day and the sense of family and unity we grew up  with because of them. I can say I am beyond grateful and proud of him.

What does being an immigrant mean to you?

“It means having a harder life and having to work more than others who are  privileged. This comes with pride on where you’re from and how you chose to  represent them through yourself. If I could change being one, I wouldn’t.”

What would you change about how people view immigrants?

“Taking into account who the president has been for the past 4 years, I think  people have become very prejudiced towards immigrants and have a lack of  empathy for them never taking into account where their parents came from and  who influence the labor force the most in the country.”

What is one piece of advice you would give to a family or person that is  struggling as an immigrant?

“I would tell them to never lose hope and to fight for what you believe in. I think  that having faith and constantly pushing towards your goals to better yourself and  others will keep you going. Lastly, I would tell them to always show love and  respect even when it’s not shown towards you because you can only control your  emotions and actions.”

The interview of Arthur Abezgauz and subsequent narrative were done by Lia Chuakay Zlobinsky, his daughter.  She is a student at Foothill College in Los Altos Hills, CA.