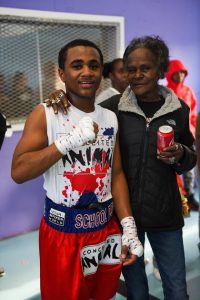 Maxine standing next to her grandson (2017)

My name is Maxine Thomas and I am the first in my family to set foot in California. I was born on May 28 1945, in Louisiana. In a time about 5-6 years after Jim Crow laws came to a end, I was taught to stay away from non-black folk. I was taught to only play with my kind because some white people disliked having to share a bathroom or water with a colored boy or girl. Other than racism, growing up in Sweetport Louisiana was a nice time for me.

I played in the trees with my sisters a lot. We had to play outside and use our imagination because we did not have enough money to buy dolls. My sister and I would have fights over  our imaginary doll named Dee. My sister would yell at me “Maxine GIVE IT BACK,” as I would snatch it from the air and run in our room to lock the door. Other than Dee and my sisters, I only played with my cousins. My family did not trust us around other kids in the neighborhood because they were sure they would lead to trouble in our paths.

As an eight year old, I did spend a lot of time wondering, wondering what will I do tomorrow? Will we have enough food at dinner for me to be full?  Will I have to eat small but fill my belly with water to calm the hunger?

When I was 11, my father received a job to work construction in the town  of Phoenix, Arizona. Taking the  job, we all set off to start a life in Phoenix. Since I was about 11 years old, naturally I didn’t mind, long as I was with my father.

I continued to wonder, will we really be better off here? New town, new friends, new work. New work, that claimed to pay my father more, so maybe hopefully we could eat more and who knows, maybe even get “sum” of them dolly toys.

We went by road; the trip was long but we arrived after almost two days of driving. During the drive, I tried to eat as little as possible knowing damn well my siblings’ go’ need this way mo’ then me. I can recall a time when  my sister had to pee so bad, she screamed at my father to stop, scaring my father into pushing the brakes like a wild animal. I laughed at her; my face was full of joy to see her so frustrated. After all, she was the one that took ma favorite soda pop and drank it all to herself.

Once I settled in Phoenix, I went to school, then later met a man when sitting outside on my school’s grass field playing some smooth jazz on the radio. He happened to say, “I love that song.” Grabbing my attention and for some reason, he was able to keep that attention for a long time now and I would soon have 4 kids with this man. But then I later decided to move away due to the sad death of my father from sickness who worked his ass off, if I do say so myself. At age 19, I wanted to make a better life, so with all my 4 kids, we set out to start a better life in California.

We departed on the Greyhound bus with 6 bags of chips and some other snacks I can’t recall well, and about $350 in my bag, but I did remember a odd older man who seemed a little nuts, if you asked me, but said some words I always carry with me: “the job ain’t done till the lights GO OUT!” as he walked of the big double-decker with a slightly big hole in his jacket. Those words marked me, telling me that I could not stop working hard to provide for my kids, not until my time on this earth is over because I know they will always need they mama and I am going be there for them.

We settled in with a distant family member, and loved the kind people and sights in California. As a child, I had seen some flyers and news reports on California and how wonderful the weather and how the people come from all over the U.S.A live there. Now I am 72 years old and all my kids made me proud by going to school and making families of their own to raise, I will say coming to California was probably the best thing I’ve done; I no longer wonder of what I will eat or if my kids will be okay. I now know myself and my churen will be good by all means, long as they play smart like mama did.

I currently outlived 2 of my kids but my others too are in well health and have kids of their own that had kids all in California, because I took the step to get on that greyhound bus just like my father made the step to take that better paying job, so me and my siblings could do better in life. I guess we all just want our children to amount to more life success than ourselves.

The story of Maxine Thomas was written and recorded by her grandchild.