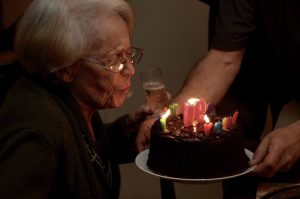 Nana – on her 90th birthday

My great grandma’s name is Paule Lucienne Zahara Kalfon she is from Algeria her and her family were Sephardic Jews and lived there during the holocaust.

According to my Dad: My nana lived in Algeria, most of her family were farmers but her father was a french officer and a port commander so they lived in the city. During world war two the vichy government joined the nazi regime. Due to this Her father was removed from the military because they were jewish. My nana didn’t share many of her stories of life in algeria especially her life during the holocaust. All I know is that it was terrible and very hard. The only story relating to the holocaust she told me was a romanticized version of how she met her husband.  During the holocaust the American army came in and liberated north africa from the nazis. During this time my nana met a man that would soon become her husband. He was a tank commander for the united states army. They fell in love and the two decided that she would come back to america with him as his bride.

She came to America as a war bride on a liberty ship at the end of ww2. We don’t know much about her trip to america or her time in algeria. She didn’t talk about it much.

When she got to america she wanted to be seen as completely american so a lot of the story of algeria and her life were lost. Most of the stories she would tell were short and usually the same ones over and over again so we don’t know much about her early life. We do know that when she first came to america she  joined a club for war brides. it was called the french club. They would exchange recipes and talk.

The group gave her friends and my nana comfort in an unfamiliar place.  Something that made her very excited was getting her first refrigerator. She lived with her family in algeria so she never had her own. While in Ohio her husband owned a newspaper called the cleveland sun press. Because of this she never got her own job and instead spent her time focusing on cooking, art, and becoming a great hostess to entertain celebrities that her husband would meet through the newspaper.the two of them used to host huge dinner parties. Her and her husband traveled the world they went to paris and many other places.

Later in her life she had three kids – two sons and one daughter. her daughter went on to have two sons of her own, one of which is my uncle and the other is my dad.

Back to me: Sadly my grate grandpa passed away before I was born. My nana is now 96 and lives in a old foks home in ohio she sadly has alzheimer’s so she doesn’t remember much.My nana’s story of immigrati shows that in some cases when immigrating, stories of there life before moving here and even from the process of getting settled here are lost in exchange for a better place to live. Sometimes these stories are never told because they want to be seen as completely ‘American’ and not seen as an immigrant.

This narrative was written by Chloe Dunnigan after interviewing her father.