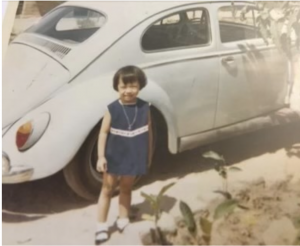 Lan De Vera as a child

I was born in Saigon Vietnam.

I came here when I was 8 years old, I had a very short time in Vietnam. Up to 8 years old I was a student. I attended a private French school until I was 8 years old which was until 1975. Living in Vietnam there were curfews, could not leave the house after certain hours, could only leave to get groceries. There was a short period where we could go to parks and zoos. I went to a Catholic French school named Saint Paul that is still there in Vietnam. I spoke French in school, the teachers were nuns. The school was very strict.

We fled the country on April 7th, the communist entered Vietnam and my father, your grandpa, came home and told us that we needed to leave. It was very last minute but there was a war going on so for years we were prepared to leave. When we left Vietnam, Grandpa took us to an air base. We left on a Boeing 747 which is a commercial airplane. So we sat on the floor since there are no seats or anything you can do a google search and see how it looks inside. It is a cargo airplane and carries heavy things so we just sat on the floor and the plane took us to Guam which is where the refugee camps were and there were a couple refugee camps there. We stayed in Guam for a few weeks and grandpa took us to the airplane and stayed back to fight in the war because he was very patriotic and wanted to make sure we were winning against the communists. It was just grandma and my 2 siblings and Aunt Anthony’s family and we all stayed in Guam for 2 weeks.

From Guam we flew to Virginia, straight from Guam to the U.S. Because we had family already living in America, we had Aunt Anna living in Virginia and my Grandma Mellor living in Maryland, they sponsored us to come to the United States. Not everybody had the privilege to come to the U.S. like we did, but my grandma was married to a man that worked for the United States government and Aunt Anna’s husband also worked for the government. they were prepared for all of this to happen. When the Fall of Saigon happened, they were prepared, they helped us do all the paperwork. They helped us go from Vietnam to Guam and then to the United States, things went very smooth for us. Other people had to go by boat and there were sea bandits and women were raped and killed and thrown off the ships/boats and some had to escape by canoe.

When I came to Virginia, grandma was alone so she took me to public school and we lived in a very nice neighborhood. It was an upscale neighborhood and we attended a public school there but me and my brothers didn’t know how to speak English. So I remember I entered the second grade when I came here and I was just trying to learn the language, and I was lost, I didn’t know how to communicate with my teachers and there were no ESL programs or English second language programs so I had to learn the language on my own. Because I knew how to speak and read French, that helped me learn English. I was too young to work so I just went to school and tried to learn English. The refugees were dispersed throughout, some of my friends were in New Hampshire and some were in San Diego.

Back in that time, most states were predominantly white. They didn’t have many immigrants or refugees around that time so we were perceived as different. My cousins would get into a lot of fights because they would get made fun of. There was a lot of blatant racism. People would call me and my cousins racial slurs and that was very common to hear. I would ignore them but some people would fight back because of the racism and discrimination in the neighborhood.

In my school, there was a Chinese boy that was being made fun of and he got fed up and got up and threw a chair at the guy that was making fun of him. The teachers were screaming and called the principal and they were all running and came to the class and were holding back the Asian boy. I think that when people are pushed too far they will react and push back because they are upset. We would walk in the mall and people would make fun of us, they would make face gestures and back then there were no detentions or form of punishment for people that did this kind of things and I don’t understand. Nowadays if someone calls you a name you can talk to an officer or something and it is a big deal so they will do something about it. People were not punished back then for being racist.

The interview and narrative was done by Christopher De Vera, the son of Lan De Vera, and a student in the Bay Area.