Vietnam to San Jose via Australia 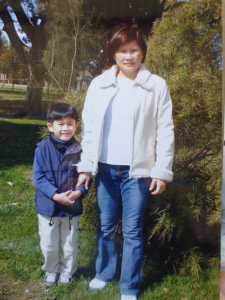 I interviewed my mother, My Son Truong, who immigrated from South Vietnam to Adelaide South Australia in 1994 and then immigrated with me from Australia to San Jose, California in 2010.

Throughout my life, my mom, My Son Truong, has always been in survival mode, always working or doing something — never staying still. She was born in 1955 in South Vietnam, living in a poor rural area among 13 other siblings. I often wondered if she ever had the time to sit and reflect on her life experiences, which is why I chose to interview her about her immigration to see what perspective she and I could learn from her reflection.

My mom has told me previously that she never expected to move out of Vietnam. She told me that her life had been cemented there and the idea of moving never really occurred, despite the trauma of living through the Vietnam War in the 1970’s and the years following the South losing to the North. She simply couldn’t conceive the idea of escaping Vietnam by boat and had accepted that she would live in Vietnam with political uncertainty. However, when I had asked her why she moved, she said it was because she was poor and needed to escape poverty. When I confronted her about this, she simply said, “sometimes we have to answer in a way that others will understand”.

My mom has a strong understanding of the U.S. and how immigrants have been fed the idea that we must move out of our country and live in such a beautiful country as the U.S.; however, through this interview I want to show that it is more complicated than following this traditional idea of escaping war.

My parents and my brother immigrated to South Australia, Australia in 1994 without sibling sponsorship from my aunties and uncles. My mom was welcomed by Australians and was immediately linked with resources from a refuge center. She attended an Adult Education and training program, and eventually became a migrant farmworker, picking and packing fruits from the fields.

I deeply remember the labor my parents did in the fields. I would wake up at 4:50am many mornings to the garage door, indicating that my parents had just left to go work in the fields. I remember feeling sad and lonely for what my parents had to do to make ends meet. Additionally, I would help carry my parents’ tool bags, lunch containers, and coffee canisters. I would open the door and feel the blazing waft of heat waves in the Summer or the pouring rain in the dim Winters — my parents worked throughout the year, on holidays and through all climates. Being a farmworker didn’t make a lot of money, but talking to other farmworkers in the US, Australia has stronger protections for migrant farmworkers.

My uncle in California eventually sponsored us to the U.S., and so I asked my mom what the major reason was for immigrating here. She said she wanted my sister and I to have more opportunities — although my brother was 28 at the time and was forced to petition for immigration on his own, which he arrived in the U.S. in 2015. At this time, my sister had scored too low on the UMAT, an admissions exam taken after high school for medical school admission and I had just started high school. To me, my mom immigrated to the U.S. for her children, but also because my parents were nearing an age where they couldn’t sustain working in the fields anymore, given the harsh climates and their health status.

I asked my mum how her life has been different, and she said that she’s been able to go to community college here, which was really important to her. Although she wasn’t able to go to college in Vietnam and in Australia, she has had time to obtain 2 associate degrees at our local community college. Obtaining higher education and pursuing education even if it had no definitive career goals, was important to her. She said that she had more friends in Australia due to working among many other Vietnamese immigrants, but in the U.S., it is harder to make friends. I think additionally, living in an area such as San Jose, which is slightly more well-off than other cities, creates less of a dependency on communities, which we saw more of in Australia.

My mom says that she is happiest about her immigration to the U.S. due to the government support for her to go to community college and for her children to get financial support to go to college, which is financially more difficult in Australia. Conversely, I asked her what she’s most sad about and she says that people die from crimes and violence more often in the U.S.

I often talk to my mom about social issues and systemic oppression, but it’s difficult communicating these complicated systems that are supposed to exist to support you. I often believe my parents take for granted what a government is supposed to do for you; although I know they are happy with the bare minimum and necessities the government has given them. I just wished they knew they were more entitled to privileges and health security if economic equity was widely distributed.

These conversations about socio-politics and economics are difficult especially for families who have experienced political strife due to socialist conflict. When merging my family experiences with what I learn from Sociology and East Asian Studies, it’s difficult to suggest that wealth-distribution and democratic-socialism could benefit us and society as a whole. Thus, these conversations and political ideologies can be clouded by the narrative U.S. history portrays. I hope to dissect our immigration story from the American Dream because for my mom she is happy to believe life is better here, but for me I see it both ways.

In discussing anything else my mom would like to share, she says that she is happy to be in the U.S. and that she is proud of her children, including my siblings and I. My sister is halfway through medical school at Michigan State University College of Human Medicine, and I have just graduated from University of California, Davis with highest honors.

This narrative and interview was conducted by Andrew Ngo, a college graduate and a current student at Foothill College in Los Altos Hills, CA.