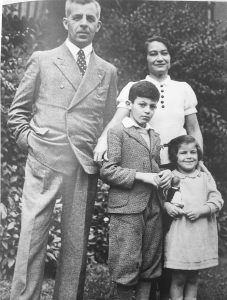 Szego Family in the US

Click Here to Listen to the Audio Version As Read by Veronica Tincher, the Daughter of the Szegos, and a Resident of Palo Alto.

Veronica Tincher’s parents, Gabor and Ann Szego were Hungarian Jews.  Her mother was born in Budapest and her father came from a smaller town, Kunhegyes. Gabor Szego, her father was a bright mathematician and professor in Hungary. Both were very accomplished – her mother a successful doctor of Chemistry, writer, and interpreter in more than three languages and her father finishing his PhD in Mathematics while still in the Army. Gabor began to teach at Budapest University in 1919, soon after he finished his stint in the Army.  Gabor had served as a lieutenant during the Great War – World War I.

Ann, was also involved in the post-war peace negotiations, working as an interpreter at the Peace Conference in Geneva.

In 1919, Gabor and Ann got married. There had been a short-lived Communist Revolution soon after the World War –  during which time Jews were given privileges that they had not received before. A year later the situation for Jews was reversed.  There was a counterrevolution during which the Jewish people were blamed for Hungary’s defeat in World War I.  Jews were fired from their jobs and more and more fled Hungary for a better life.

Ann and Gabor left for Berlin, Germany in 1920 shortly after the establishment of the democratic Weimar Republic. Gabor was able to teach at the Humboldt Institute. Ann was a science translator. Her science background and thorough knowledge of German, French and English made it possible to obtain work translating scientific papers.  In 1925, Ann and Gabor had their first child – Peter.

In 1927, Anne, Gabor, and Peter moved to Konigsberg, East Prussia where Gabor taught at the University of Konigsberg. In 1929, their daughter Veronica was born. Once, Hitler came to power in 1933, they had to find somewhere else to go. Jewish professors were fired from their positions by way of forced retirement without a pension.

Gabor reached out to American math professors looking for work. He had a Russian mathematician friend who he had helped acquire a position at Dartmouth College back in 1925 when Jews were faced with growing repression in the emerging Soviet Union.  The Russian colleague, now on the faculty at Brown University, was able to return the favor by contacting other mathematicians in the U.S. Through their efforts, they made contact with the Rockefeller Foundation that was trying to bring Jewish scientists out of Nazi Germany. The foundation helped Gabor and his family leave Germany by ship and get a teaching position at Washington University in St. Louis, Missouri.

Ann was very seasick on the ship and she spent most of her time inside the cabin. The move was difficult for her but in time she adjusted to the new surroundings, made friends with other refugees and learned about life in the U.S.  On the other hand, Peter and Veronica were excited. They watched movies starring Shirley Temple, a small young girl about Veronica’s age, and they became big fans.

The Szego family was overwhelmed by many new experiences and features of American life, including the amount of traffic, the supermarkets, and football – which bore no resemblance to soccer.  It took Veronica some time to learn English and that led to some uncomfortable moments in her new Kindergarten. In time, she mastered English and made new friends. The transition was more challenging for her brother, Peter.  At the time, the schools would place non-English speakers back into the 1st grade, regardless of their age and educational status from before.  Peter was 9 and already starting 4th grade when the family left Germany.  It took 3 years for him to catch up to his age level at school, partly due to a re-occurrence of TB that he had contracted in Germany as a small boy. He spent about 3 months in bed, thereby missing a lot of school. 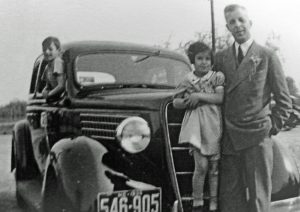 In 1938, Gabor was given a tenured position at Stanford University and the family resettled in Palo Alto, California. Veronica’s parents bought an old house and large 2 acre garden in Los Altos.  This was the first property that her father had ever owned. Veronica remembers that every summer her parents would invite fellow immigrants and refugees at other colleges for extended visits and that milieu became the substitute for aunts, uncles and cousins left behind in Europe.

All the while, the situation in Europe overshadowed the family’s lives.  After the U.S. entered the war, Veronica’s parents lost contact with the family in Hungary.  They tried contact through the Red Cross but to no avail.  The summer of 1945 is “etched” into Veronica’s memory when they finally received a letter from her mother’s older sister.

It turned out that Veronica’s aunt, uncle and their daughter as well as another cousin of Veronica ended up in the Bergen Belsen concentration camp.  The younger cousin perished from the terrible disease and malnutrition they all suffered.  Her Uncle was gassed in Dachau. Her Aunt and her daughter, (Veronica’s cousin), after being liberated by the British, were taken by the Swedish Red Cross to Malmo, Sweden for medical treatment and rehabilitation but eventually returned to Hungary.

Veronica’s younger Aunt and her husband attempted suicide in Budapest.  The aunt survived and was hidden by a non-Jewish friend.  Her daughter – the one in Bergen Belsen – had a baby boy that her Aunt then raised.  He grew up and moved to San Jose with an American wife and kids.

On Veronica’s father’s side, his only sibling was also killed by the Nazis and left a non-Jewish wife and daughter.  The daughter eventually grew up and left Hungary in 1956, finished her engineering studies at Stanford. She married a fellow grad student from Scotland and settled in Portola Valley.

In 1948, after the war, Veronica went back to Hungary for 3 months, with her parents.  It was a life changing experience and it was the first time she appreciated her immigrant experience and Jewish roots.

Veronica eventually became a statistician. Peter became an engineer and later became an idealistic aide to an elected official.

These memories were shared in writing by Veronica Tincher and in an interview with Maria Vazquez.  Veronica lives at the Moldaw Senior Residences in Palo Alto, CA.