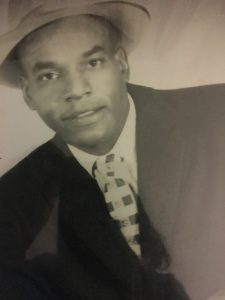 This is my grandfather Judge Dennis Cantrell II.

I was born on June 3rd, 1919 in Gainesville Georgia. I was born into a family of 9 and poverty. Not long after I was born, my family moved to Knoxville, Tennessee, the things I saw were different than what I had saw in Georgia, or at least what I had remembered. I could feel the country life consume me as I heard the different farm life from clucking chickens,  to mooing cows around me. I knew that this was going to be life for the next several years. Life in Tennessee wasn’t bad, we went to church, my mother and father were both very devoted to the Lord, it was part of the reason I was also so committed. I thanked God that for the life I was living. My brothers and I decided to start up a quartet, and we weren’t bad, we were actually really good. My name then, was JD II, my father was JD Sr., back then, people didn’t have first names, we were simply known by our initials, I had three brothers and four sisters and they were the best. But everything started to change after my mother died, I was 8 years old, my father sealed himself off from my siblings and I, and eventually, he left us, without a goodbye.

In Georgia, we didn’t have what we had in Tennessee, which is one reason we had to leave. My mother and father knew that growing up in poverty was not the life for a kid, or kids for that matter. I could always feel when my mom had something heavy on her heart, however my dad was a bit colder than she was and I could never really get that connection with him. I was heartbroken when he left after my mother passed, and after that I could always feel her touch. When I would think of anything relating solely to her like the smell her home cooking every time I walked in our kitchen, and it was at that point where I knew what I had to do.

I couldn’t provide for my family just sitting around mourning so I decided I take action.  Around the age of 15, I lied and enlisted as a “16” year old kid in the Navy. My brothers decided they would join me, my brother Sam, was like my best friend, we would always have each others’ backs, no matter the cost. When I left Tennessee, WWII had just broke out. We had enlisted and were immediately at a disadvantage, we had been discriminated against, and couldn’t use the same things and the same facilities as everyone else. We weren’t complaining though, we were thanking God for our positions. At what seemed to be one of the highest points in my life, it turned into disaster when my brother was killed in the field. I remember hearing the rapid fire of the MMG, and the earth shattering boom of the grenades. I could feel  the blood splatter on me, from soldiers like me, losing their lives. Sam went missing in action, or as we called it, M.I.A., I wasn’t sure if I would ever see my brother again. It was at this point in my life where I thought I had lost everything, I was alone and looking for a safe haven.

I got reassigned to a U.S. Navy ship in Hawaii, near Pearl Harbor. There I would help out with fixing things around the ship. One day I suddenly heard the loud crash of a Japanese air strike coming in and attacking the famous military base. I heard the shear cries of civilians and the orders being screamed out by the Captain, it was chaos all over. I was determined to do something to help in this onslaught, so I jumped ship and swam to shore and helped as many innocents and soldiers who were on ground. After saving dozens, I eventually knew that I had to save myself. I got out of there without being physically harmed, but the mental wear and tear on me was beginning to show. I was honored for my courageous and heroic acts, and was honorably discharged. I knew and felt in my heart that God had gotten me through it all during my time with the SEALs. It was after that when I decided that I would move to San Francisco.

In SF, life was slowly starting to get better, piece by piece, and it wasn’t long before I met the love of my life, her name was Claudester. I had a good jobs working as a mechanic in a shipyard. People would have their cars shipped into the docks and I would go to work fixing them. I was a government employee for the city of San Francisco, and I would cross the Bay Bridge almost every day for the next forty years. I married Claudester and we raised beautiful children, Lee, Pat, Brenda, Barbara, and my only son, Judge Dennis Cantrell III. God was continuing to bless me and I knew that whatever happened, God had a plan for it.

Life in San Francisco was the best, in fact it was so good, that sometimes we didn’t even lock our doors or windows. I made good friends in the neighborhood and all of them were of different nationalities, from Italian, Hispanic, and African-American. I saw some of the friends that I had made overseas, after traveling the world a good once or twice. You see and learn different things, I learned how to make friends without making enemies and it payed off. My kids were excellent, they were in multiple clubs at school, from drama, choir you name it. Eventually father time caught up with me, and I was diagnosed cancer. I didn’t want to go through any chemo and I believed that I had done well enough in this world and that God was telling me it was time to come home. It was as if I could hear his faint soft whisper, and feel his gentle hand on my shoulder. I knew that with the legacy I left, my kids would be just fine.

This story is based on an interview by Judge Cantrell, a student at Eastside College Prep.