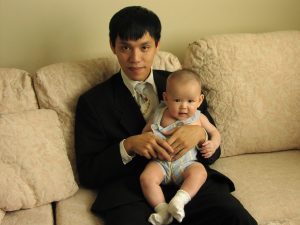 Imagine being raised in a country where you are constantly being monitored and having constant worries 24 hours a day. My Dad was born in Saigon, Vietnam. His life was not the most ideal lifestyle because of his family worries about not having food on the table every day. He lived in a police state and the police were pretty much everywhere. If you wanted to invite someone to come over you have to report it to the police.

Student work on his or her education was quite hard because it was really hard to go to college. My dad left his country with his mom because the U.S education system was much better than in Vietnam. He was 21 when he left in 1995. How my dad family managed to leave was because his aunt sponsored him and so he just needed to take 2 planes to reach the U.S.

When my dad first got to America, he lived in the city of Irvine and went to the community college of Saddleback for two years before transferring to Berkeley. During his two years at the community college he had a part-time job of sorting mail at night from 10 pm -1 am. After graduating at Berkeley, he married Van le in 2001 and gave birth to his first child the same year.

His family first lived in San Jose and he worked at a company but unfortunately, the company went bankrupt. We later moved to Palo Alto and my mother gave birth to my brother and sister. He now currently works at Thomson Reuters in San Francisco. He now lives in Palo Alto with his family of 5. He hoped that he could raise a family and take care of them and hoped to be successful.

This story was written by Quan Nguyen, after interviewing his father. Quan is a student at Palo Alto High School.