Thought There Was Help for Immigrants (Guatemala) 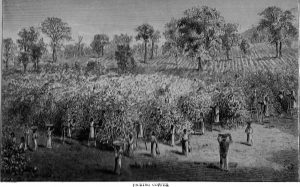 Beatriz (name changed) was born in Guatemala, Tumbador. She lived in Guatemala for 20 years. She migrated to the United States because for two reasons. She wanted to help her parents because they worked on a farm cutting coffee berries. The work was very difficult and they didn’t earn very much money. Hortencia and her sisters also worked on the farm to help their parents. There were no boys in the family and there were not very many opportunities for women to work. Secondly, her husband wanted her and their son to come live with him in the US. He wanted his one year old son to have a good education. She thought that this country provides help for immigrants.

Beatriz was very motivated to come so that she would be able to help her parents. She talked to them and told them about her plans. They were sad since they were used to seeing her every weekend. When the day came that she had to leave,  her parents went the Guatemalan-Mexican border with her and her son.  They were going to cross the border alone and then they were going to live for two months in Vera Cruz, Mexico with her sister-in-law.

After two months, the coyote called her and told her that her husband had arranged to bring them. When she arrived at the U.S. border they told her that she would go through first because it was more difficult for her to pass than for the child and she said that it was fine even though she was scared and worried about her baby. She crossed at night with the coyote,  and when they were on the other side she was very nervous because she could hear the border patrol officers in the distance. Finally she heard a person say that she could come out from where she was hiding and she thought it was the coyote. When she came out a border patrol officer was there and he took her to the place where they took immigrants. They asked her if she was from Mexico or from other country. She said that she was from  Mexico because if she wanted to try again it would be easier for her to do so. She only spent one day in detention. The same day she tried again and this time it worked. As soon as she was across, she called the coyote who had her baby and he brought her son across to her.

When she arrived in California her husband was  waiting for her. She was happy but sad because she had left her parents. The first weeks and months it was very difficult because she didn’t know how to speak English and everything was different. She fell into depression and even wanted to return to her country because she missed it so much even though her son and her husband were with her.  She came out of the depression and decided to go to work. When she went to work for the first time it was difficult because she hard to learn to take the bus and her bosses spoke only English but after a while, she became more comfortable.

She has been here now for fourteen years. She has four children and she has her own small cleaning company.

This story was written by a stepdaughter of Beatriz.