“This Train Is Bound for Glory” – Migrating from Louisiana 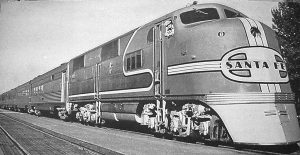 There it was always hot, real humid. So when the rain fell, it was hot rain. And the rain would sometimes cause lightning- it would come and strike anything just about. It would strike trees, utility poles, power lines, anything, when the lighting was out, it was best to be indoors.

Although the memories are faint. I do remember the days I spent with my grandma. She was a loving woman. She really cared for her family. Since I was one of her eldest grandchildren, we could do a lot together. We ventured everywhere. To the Zoo, the French Quarter, parks, et cetera.

Although, everyone was not always celebrating. Just like many cities in the South, there was still hundreds of thousands of people, mainly Blacks, like my family, who were struggling to get by. After all, the effects of the Great Depression coupled with being Black in America’s South made life all the more difficult. In the times of the Civil Rights Movement, there was another movement happening. It included the mass migration of millions of African Americans from the South to the Midwest, Northeast, and the West. This geographical movement has been named: The Great Migration.

My father made the same decision that millions had made before him. He sought for the presence of poverty to no longer prevail over the destiny of his family. He worked three jobs and still struggled to pay rent to a low-income housing development. So in the summer of 1964, two weeks before my 9th birthday, we packed whatever we could bring as luggage onto the train. As we vacated the house, our belongings were either left in the house or passed onto relatives. I vividly remember having to leave my beloved human-sized teddy-bear. Having to abandon it, I was saddened, luckily, my grandmother offered to care for it.

The journey here was long. In fact, it was a three-day train ride. Three days and two nights of us on that train. We traveled through eastern Louisiana, through numerous Southwest states, then up California, through Los Angeles, then up to the Bay Area. We slept for most of the trip. I recall eating cereal out of those little boxes. My parents tried to satisfy my siblings and I along the journey. I can’t imagine what they were thinking, after leaving behind their hometown. I remember the huge hills and giant mountains we traveled by as we trekked north to the Bay. I still recall how I thought those distant mountains and hills were humongous dinosaurs coming closer and closer to me. To this day, I recall those memories and I crack up. Finally we reached the San Francisco Bay Area.

Upon arrival, we headed to my uncle’s house as arranged by my father prior to our trip. Our uncle housed us there for a decent amount of time until my father could situate us elsewhere. Eventually we moved into a spacious apartment in Daly City. It was quite difficult getting adjusted to school. The schooling was different here than it was in New Orleans. Due to a earthquake-preparedness campaign, my school was demolished. So my sisters and I could no longer go to school together. The weather over here was really different too. It was always cold and windy over here, nothing like New Orleans. I had to take my sweater everywhere. The weather could and would change up whenever it felt like it. I’ve resided in the Bay ever since though.

Eventually, I became an adult. Although I had a disability, I still managed to work. I was a clerk and assistant teacher. I was trained to do those jobs. I loved working with children. It was rewarding, they brought me so much joy. They unconsciously shared smiles and a sense of happiness with me. While watching after children, I went on so many different adventures. Either to the park, to libraries, to schools, to the pool, et cetera. Well, while continuously taking the children to their swimming classes I grew closer to a man, their swim coach. We would share laughs and what not. He was a real friendly man, always sharing joy with others. We became friends, then we were dating and soon we were married. My husband, your grandfather, made me believe I could do anything. Even in the midst of harsh circumstances, he brought hope and encouragement to me. While I was pregnant, my doctor notified me that while giving birth me or the baby could die. But my husband reassured me that we would be fine. Indeed, eventually I naturally gave birth to three children.

Although, life has been challenging without your grandfather, I have decided to faithfully push forward with the support of God. I continue to believe that God is helping me. I have been blessed with a bountiful number of opportunities. I live in a peaceful place where I can always reflect and dwell in serenity with God, our gracious father.

This interview and narrative was conducted by the grandson, a student at Eastside College Prep in East Palo Alto, CA.