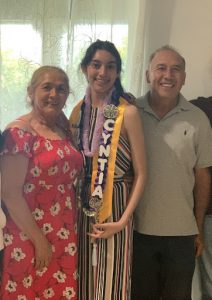 the Author with proud grandparents at her Middle School graduation.

My name is Cynthia Mendoza. I am 15 years old and my interviewees were my grandparents. My grandmother Angélica Cuevas de Ontiveros is 64 years old and my grandfather Francisco Ontiveros is 67 years old. I decided to interview my grandparents because I never got the full story and I feel that I can honor them through sharing their stories. Angélica was born in Arteaga, Michoacán. Francisco was born in Espinoza Municipio de Arteaga, Michoacán.

In two separate trips, they emigrated from México and immigrated to the United States. Francisco has approximately spent a little more than 40 years living in Redwood City and the same job position at Spring Down Equestrian Center in Portola Valley. Angélica has been living in Redwood City since 1987 and dedicates most of her work cleaning houses. They both grew up in religious Catholic households and volunteer at St. Anthony’s Church. My grandma spends most weekends tending to her love for plants throughout her house while blasting the television news. My grandfather loves to spend his time listening to Los Muecas while planning his next traveling adventure.

The living circumstances that they were living in once they had a family and the opportunities the US offered brought my grandparents the discussion of leaving Espinoza to take on the “American Dream”. Their village was a rural community away from civilization that has been there for generations. Their children grew up roaming around the mountains and moved freely throughout their family’s house.

My grandfather describes being grateful for the ignorance he had in his childhood that brought him to have a protected childhood. He recalls being shocked for the first time when he was young when he first saw a car driving along the faraway mountain. He was so shocked and scared because he thought it was a walking house. In his little village, all he knew was transportation being on a donkey. His childhood that he experienced he feels grateful for so he wanted this for his children.

On the other hand as a child, my grandmother wanted to get away from the experiences she had as a child. At the age of four, she lost her mother and grew apart from her siblings. My grandparents both agreed that poverty was a big influence on them leaving Espinoza. They had to choose between food or school that only let them go up to second-grade reading and writing. It was always two options: food or school, food or shoes. Careers didn’t exist and weren’t possible.

She didn’t want her children to grow up the way she did. My grandparents both came to terms that when they had their family of seven it only became more difficult for them. My grandfather would work himself to death till he got to the limit. He told my grandmother,  “de que vamos a vivir aquí? ¿Cómo vamos a crear la familia? ¿De qué los vamos a mantener?” They had nothing every day; it was from zero. Even then he was only able to provide his children one pot of frijoles de oja, every once in a while being bread or tortillas.

My grandfather knew that he had the risk of losing everything if he tried leaving for the US. Threats also circulated in the village of those who had been deported back that immigration knew how to target Mexicans as they went to look for them in working fields/ranches. My grandfather first started coming in 1962 where he was in and out of México and the US because there didn’t exist a border so he would work in California and Colorado till he was kicked out by immigration. He would receive a card saying how many hours he worked and then the man in charge would go to México to pay them.

My grandfather talked with my grandmother and made the hard decision to leave his family to try to settle in the US. He found it very heartbreaking to have to leave and escape their house without the children seeing him or finding out.

An uncle of my grandmother had his papers and happened to be in México so he helped transport her to the bus terminal. She took the bus trip Norte de Sonora that’s from Arteaga to Tijuana. With just one luggage with 2 changes of clothes per child and whatever shoes her children had. A gallon of water along with some cups she was able to buy. She made tortillas de harina to make sure her children survived the long 3-day trip.

The Eldest daughter was nearly 12 years old, the other 3 children followed up with the youngest barely learning to walk. While on the bus she struggled a lot with keeping her children safe and the bathroom breaks. Eventually from being there so long people would question where she was going with all those children her only response was to the north. People would doubt her and couldn’t believe her. Once she and her children arrived in Tijuana with the little money left she got a hotel room where they waited for someone to cross them over the border. When crossing the border her children were to fake sleep and use the documents of their cousins along with her. Once entering the US she traveled to meet my grandfather and everyone was reunited. 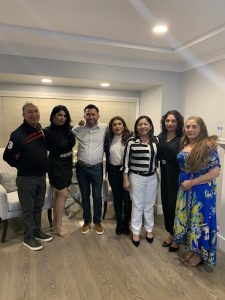 The children of my grandparents at my Grandfather’s birthday.

Starting in California they lived in a shabby rented-out studio that was empty with a little kitchen and bathroom where they slept on the ground that was their usual home. My grandmother tells her story of walking by a house she would always look at and admire. She felt a longing looking at the rent sign but felt sad when she knew her family barely had enough money to rent the studio. Once she got here to the US her children begged her to go back but she would get frustrated and tell them what were they going to go back for. This is a new start and they needed to be strong to put up a new fight.

They all felt very uncomfortable at first having to be almost closed and locked up in space. México felt freer for her children to roam the land and visit family all over their little village. My grandparents were also like the first family that started the massive migration and helped people come to the US from their village. So at the time, they didn’t have a lot of families. My grandmother grew very emotional over the new fantasies and childhood this country had to offer her children.

Birthdays became a new celebration and existence to the children where she recalls the bittersweet moment of her children learning the existence of cake. Since they came at the end of September, people would ask her if she was going to dress up her children for Halloween. She had no idea and was introduced to that holiday where her children would be able to discover candy and the best part was it was free.

My grandfather always recalled that adapting and utilizing the new language was very difficult, but aside from that he was very excited and thanked God that the food was very good. The US had in place what he had never seen before was a system that was very beneficial to those that wanted to succeed. He took on big roles to figure out banks, identification papers, taxes, etc. He felt that these systems and obligations were very helpful to learning American culture. He attended Sequoia adult school to help himself succeed in this country and along the way he advised that friendships and relationships are essential when coming to this country if you don’t then you won’t have a base to succeed.

My grandmother found that being in this country without papers was the hardest part since she was eager to work. She mentioned an instance where she bought some crooked papers for a job interview. The American lady that interviewed her couldn’t give her the job as my grandmother couldn’t speak English back to her and she described “tenía cara de Mexicana”. Soon after she was able to meet this young lady that offered her the opportunity to work to take care of children but eventually the children grew up and she couldn’t drive them to school.

My grandmother mentioned that she was not able to get her license and know how to drive was another setback because for her cleaning job she would commute on buses and walk multiple blocks to her clients houses. Feared going outside sometimes from hearing neighbors talk about immigration and threats.

My grandmother is always proud that she was able to raise all 5 of her children to be good, with the best she knew she could provide them. When she goes back to her homeland she is hit with the reality that her daughter’s friends are there with their families are still in similar poverty conditions and feels baffled that her children have their jobs, cars, families, and citizenship. 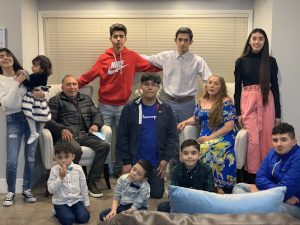 She is infatuated with her big family from 4 girls and 1 son to now her children along with 3 granddaughters and 6 grandsons.

She has her documents, car, and the house she daydreamed about while walking on the sidewalk is now hers.

From not knowing how to read or write she now is a citizen of the United States. Her dream is now at rest most importantly safe and secure in this country. My grandfather’s emotional and big decisions he looks back saying “valió la pena” for the well-being of his family and everyone else that has been able to make it here and carry out their dreams. He feels that he has met all his goals of giving back to this country and looks forward to his retirement. It’s a privilege to be Mexican American and contribute to this country by bringing our roots forever alive. 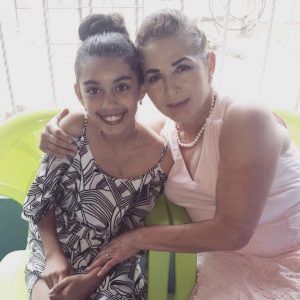 My grandmother and I in 2016 visited Espinoza

Excerpt from their messages to the public:

This interview and narrative were done by Cynthia Mendoza, a student at Eastside College Prep School.