The World Was His Oyster (Singapore) 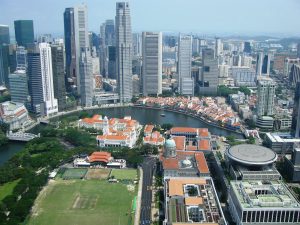 Carl, my Grandfather, passed away on March 14, 2015. Before then he would always tell me stories of great wisdom and symbolism. Though it wasn’t until I was older that I realized how incredible his own life story was and how it connected to these intricate tales I heard growing up. Grandpa was always a wise and honorable man, although he was just as much frolicsome and silly. He was about six feet tall with black hair and olive skin, because he was half Portuguese and half German (on a superficial scale).

He was never a numbed consumer of nonsense and worthless habits like most people are in today’s world of the 21st century. He spent his childhood without friends and technology, but instead had 5 dogs and an elaborate imagination.

My Grandfather was born on the island of Singapore in 1922. He spent the first seven years of his childhood there with his parents and dogs, and little did he comprehend that he had an extraordinary destiny in front of him. Grandpa’s Dad would take him on camping trips from time to time during his early years to experience the mysticism of God in nature. One time they went to Johor, Malaysia for a camping trip where my Grandfather experienced a boat ride up a river surrounded by lush rainforests and fierce crocodiles. Later that night, he could see the glowing eyes of the wild animals in the reflection of the campfire. This exposure to nature, the wild, and adrenaline was a necessary step for preparing my Grandfather for what was ahead.

When the stock market crashed in 1929, Carl and his parents lost absolutely everything except each other. They managed to initiate a migration to Hong Kong, China to live with relatives. Carl finished grade school in Hong Kong, but his Dad couldn’t find a great job there, so the entire family moved to Shanghai for an occupational opportunity where my Grandfather started high school. For Carl’s sophomore year his grandmother decided to take him on a year long trip around the world with his mom going from Shanghai to America; America to Canada; Canada to Europe; Europe to Africa; Africa to India, and India back to Shanghai.

One of the most interesting things about this trip is that Grandpa’s school teachers provided him textbooks to take with him for studying, and in return they would give him credit for the school year. Perhaps they realized what type of exposure and knowledge he was going to gain from the trip. He even rode a camel through the mystical and swift whispers of wind and sand in the Sahara Desert to witness the extravagant Pyramids Of Giza.

Grandpa returned home to Shanghai with a new perception of the world. One that he would hope to sustain, because before he could finish high school, the Japanese were approaching Shanghai in the midst of World War Two. It was no longer safe to live there, so the family scrambled to gather their valuables and fled to Manila, Philippines. My Great-Grandfather found an excellent job there and Carl finished his final year of high school.

After he graduated, he was advised to go to college in the United States. He selected Georgetown University in Washington, D.C. When he arrived in the U.S one of the first things he noticed was that all the food here was tasteless. He grew up eating many different elaborate Asian flavours and he was not at all satisfied with the food here in America. He also had a British accent and used British expressions which ended up having its humorous effect on the relationships he developed in America. Another big change for him was the aspect of living alone in a completely new environment. He now lived independently, although my Great-Grandfather was living up in New York City at the time. They would meet on occasion, but Carl was for the most part distant from all his relatives at the time. This was his first opportunity to live life however he saw fit given that he’d seen and experienced so many different ways of life previous. Over the course of the next few years he made many friendships that would last a lifetime.

By his final year of college, war with Japan escalated with the U.S and the Japanese had invaded the Philippines. Carl’s dad was in New York City, but his Mother and Grandmother were still in the Philippines. So upon graduation my grandfather entered the U.S NAVY requesting duty in the south pacific where his family was. He was granted deployment there, and when the American forces recaptured Manila, Carl was granted leave from the NAVY to locate his relatives. After he’d rescued his mother and grandmother, Grandpa stayed in Manila to help reopen the Naval base.

After Grandpa’s military service was over he came back to the United States to finish law school at Georgetown. When he finally graduated, he joined the rest of his family in Seattle, Washington where he later met my Grandma.

In summary, my Grandfather lived an amazing life on the move. Migrating for almost every reason thinkable and also experiencing so many rich and valuable experiences. He raised 5 kids with my Grandma and migrated one last time to Palo Alto, California in the 1960’s to live in a wonderful home that cost $30,000+ at the time. What a fortunate decision he made for my family. This is my Grandfather’s completed American Dream.

Written by Joseph Morrow, a student in Palo Alto, CA