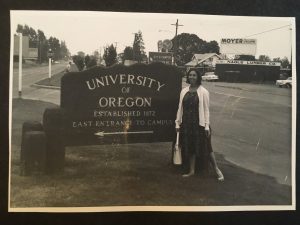 “I’m not an immigrant of the United States. I consider myself part of the brain drain, I came here simply for my education, expecting to return home.” My grandmother, Rita Tabourian, grew up in Beirut, Lebanon and attended school at the American University of Beirut. “My mother gave me the same opportunities she gave her son. She raised me to be able to achieve whatever my aspirations were.”

Rita’s brother, Garbis, is four years older than her so by the time she had graduated with a master’s degree in psychology at the American University of Beirut, he was working and married. As adults, Rita and Garbis lived together in their parents’ house after their mom and dad passed away two years apart when Rita was in her early twenties.

With the support of Rita’s professors at The American University of Beirut and the inspiration from her mother, she decided to apply to the American Embassy of Beirut through the International Institute of Education for a spot at an American university. When she got the letter saying she was accepted to The University of Oregon, she packed up as many belongings as she could, bought a plane ticket, and said goodbye to her home for at least the next two years.

It was September of 1962 when she left Beirut at age 26. All on her own, she boarded a plane that took her to her new life. She first flew to New York where she met with one of her professors who was visiting and toured the city. The next day she boarded another plane that took her to Southern California where her cousin, Jirair, lived. She spent about ten days with her cousin and got used to living in a new setting. Jirair took her to Las Vegas because she loved to see places “that were fun and exciting”. Later that week he drove her 15 hours to Eugene, Oregon where the university’s campus is.

America was new to Rita, she had never visited before and she was the first in her immediate family to live there. After coming from such a small country, Rita thought that “America wasn’t intimidating, it was awesome!.” At school, she lived in a dorm for a year and then moved into an apartment. She had an assistantship at school which meant that she worked 12 hours a month as a lab assistant and, in return, the university paid for her education.

Rita had brought lots of “party clothes” in her suitcase on the plane, while the rest of her clothes were being shipped overseas in a large trunk. For the first few weeks of school she only had fancy clothing to wear. “I didn’t have appropriate clothing, girls tried to lend their clothes to me!.” 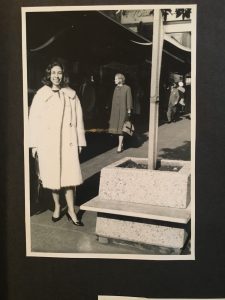 Rita never really made friends at the university, mostly just acquaintances. She felt as if she lost her whole support group because all of her family and friends were back home in Beirut. On the bright side, being in America on her own was good for her. “Living in America by myself gave me an opportunity to grow as a person”. Luckily she had her cousin just one state away if she needed anything. For Rita’s first Thanksgiving, Jirair invited her back to California. “I didn’t know you had to buy a plane ticket so far in advance so by the time I bought one, all they had left was first class”. Once again she packed a bag but this time it was a short flight away and she got to enjoy the comfort of first class luxury. When she got to Jirair’s house she felt relieved, “It was wonderful. It was really, really nice to see family again.” 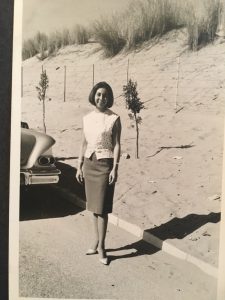 During her first year of school in Oregon Rita met Richard. Richard was a student in a class that Rita was an assistant in. Richard liked her and told her he wanted to date her but Rita thought, “there’s no way that I’m going to date you because you are in my class and that wouldn’t be right”. So Richard dropped the class and two years later they were married. Rita realized that since she was married it didn’t make sense to go back to Beirut like she was expecting to. “There was no question in going back”.

Rita wasn’t disappointed that she wasn’t going back home because there wasn’t much left in Beirut for her since both her parents had passed away. Since that time, Rita has had two children, Kirsten Araxi and Courtenay Alexander. She has also worked as a director in high tech and has lived in Palo Alto for 47 years. In 1975 civil war broke out in Lebanon and Rita worried about her brother and his family who still lived there. She urged him to move to America to stay safe. Garbis, his wife, and their two daughters moved to Palo Alto and stayed with Rita and her family until they found their own home.

The interview and story about Rita Tabourian was done by her granddaughter Quinn Westgaard, a student in Palo Alto, CA.