The Struggle of Wanting a Better Future (México) 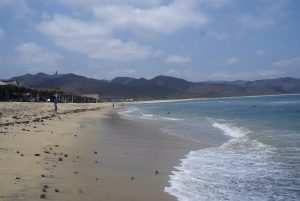 She was a young and an energetic woman. She was a supervisor. She packaged mangoes to help her family, doing whatever she could to make her child’s life better. She was Ana.

As I was growing up in México, I felt free. My parents to this day have a huge house where I got to play with my sisters and go to the beach with them every weekend. The scent of the ocean was so strong, you could smell it before arriving at the beach and the hot days that made us sweaty were perfect for swimming. I remember the sound of seagulls while playing on the soft sand. Days like that, make me want to go back and relive them. I would always play dolls, ride bikes, play soccer, and so much more with them. At the age of fifteen my parents one day asked me if I wanted to work and I said, “Yeah.” I spent my time looking for a job and I dedicated my time to it. My job at the time was a supervisor for a mango packaging company. I would supervise the people that were packaging the mangos to be shipped out. My family was not too rich and not too poor either, so getting a job did help the family out more.

When I had heard about the U.S. I had wondered if that was a place where I wanted to have a better future for myself, my daughter, and mother. I didn’t want to take my daughter’s dad because he had abandoned me and my daughter four months after my she was born. So, when I had eventually began planning out a way for us to get to the United States, I mainly did it to have a better life with my daughter. The thought of leaving also made me sad because I was leaving my home. I was leaving where I grew up. I planned it out anyway, especially because I knew that there was a bright future ahead of me and my family.

The day after I had planned everything out my mom came in my room and asked, “¿Qué estuviste haciendo anoche?” What were you doing last night?

I had responded with “Estuve planeando una manera para irnos a los Estados Unidos.” I’ve been planning a way for us to get to the United States.

“Lo sé mamá, pero piensa de la vida que podemos tener allá.” I know mom, but think about the life we can have over there.

“Ay no se que decirte.” I don’t know what to tell you.

“Dejame tratar primero mamá. Con Dios, todo va a salir bien.” Let me try first mom, everything is going to go well. All within the name of God.

The main reason I left México was for my family and for their future. I also wanted a better economic place for them. I was 21 years of age during that time and I had thoughts of a bright future. My thoughts had felt as if they were almost real. Knowing that I wasn’t going to live with my daughter and mother had me devastated, but I knew that it was for the best. It was up to me at that point to not disappoint my family.

A month after I planned my journey to the United States, one of my cousins from Southern California came to visit and I had asked her and her husband for a ride to Mexicali. My cousin had said, “¿Claro que si, pero sabes qué peligroso es cruzar la frontera?” Of course, but do you know how dangerous it is to cross the border?

“Si, lo se, pero lo quiero hacer para apoyar a mi familia y más mi hija.” Yes I do, but I want to do it to support my family and my daughter especially.

“Bueno podemos irnos en unos de estos días si quieres, solo si tu mama accepta” Alright, we can go in one of these days if you want, but only if your mom accepts.

“La convenceré esta noche.” I will convince her tonight.

A couple of hours had passed and I was alone with my mother in the kitchen. I had walked up to her nervously and began talking to her about it. She freaked out when I had told her that I wanted to leave one of those upcoming days. Maybe, the night that my cousin was going to leave.

“Sacamos la conversación cuando llegó mi prima, pero estuviste ocupada, que no me dio la oportunidad de decirte hasta ahorita.” We began talking about it when my cousin arrived, but you were busy, not giving me the opportunity to tell you until now.

Later that night, she began to pray in the room with the dimmest light. She prayed and she prayed. I would overhear her talking about me and asking God to take care of me on my way there. I began to cry. Thinking about not being there with her. Thinking about leaving my daughter for a dream that seemed impossible. I wiped my tears and headed towards my cousin to tell her that I needed an extra day to prepare. She responded with, “Toma tu tiempo, no te preocupes tanto, estamos aqui para apoyarte.” Take your time, don’t stress over it too much, we are here to support you.

Entering the year 2001, we got to the frontier and waited a few days to find a way to get in. I had attempted to do it twice and I was arrested those two times. In one of those arrests, I had been pushed into a lake where it could suck you up as if it were quicksand. I swam my way out of there, but it was hard because I was holding on to my cousin’s hand and I was panting and running out of stamina. Once we got out, we ran as fast as we could until we got somewhere safe. I lay on the ground with the smell of that dirty water we were in. My body felt as if I had been glued to the floor and couldn’t get up. We made it though, all thanks to the Lord. On my third attempt crossing, I finally made it across. Like they say, third time’s the charm.

Once I had gotten to the city in Las Vegas, it was absolutely beautiful! The stores and the city itself was nothing like it was back in México. Although, the food wasn’t as good as the view of the city. I spent four months finding a job. I wasn’t able to get a job because I didn’t know what I was able to do without having to speak English. Even to this day, I still try to practice English to improve and help not just me but my kids if they need help on homework. Arriving at my new home was surprising. My uncle had picked me up and let me live with him until I was capable of getting my own place and doing things more independently. But until that time came, he would help me through most things.

Two months after I arrived to the U.S., I received news about my father passing away. I was broken for months, especially because I couldn’t go to his funeral. When I heard the news, I had went into my bedroom and sat next to a bright white lamp on the floor and cried until I fell asleep. After those four months of finding a job, I found myself a janitor type of job but for offices. When I first started working there, a lady taught me how to work and how to follow the  schedule. We then got close over time and we would look for a new job to work together if we weren’t comfortable where we were anymore. Overall, my first job was easy and fun. Every night I would pray for my daughter and mother to be okay, and I would pray that I could bring my my mother and daughter to the U.S. with me. I really did miss them.

Life now has been way better than it was back then. I got to bring my daughter over a year after my son was born. It is also better now that I have three children whom I consider to be my engine to carry on living. My mother was never able to make it because she died in 2012. She wasn’t able to come because there were issues going on back at home that only she could take care of especially since I wasn’t there to help her out either. Now I dream of getting legal papers so I can become a legal resident and not worry too much about me leaving the country. One of my major goals is to completely rebuild my parent’s house back in México. What I am most proud of is that I was able to make my dream come true of helping my family and bringing my daughter here to the U.S. Overall, this has been a worthwhile journey because I have my daughter here with me now in addition to two more kids that make my life feel complete. Living here in the U.S. has made my life brighter. Amo a mi familia.

This story is based on an interview by a student at Eastside College Prep.