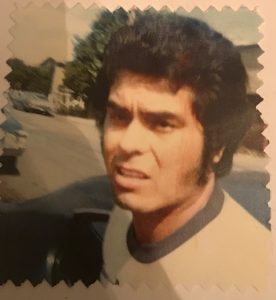 This is a picture of my grandpa when he already came to the U.S.

I was a kid who never knew what the U.S. was, what future was waiting for me here, what courage I was able to obtain, and what blessed life I would end up living. So I walked, ran, and hid to reach my brighter future here in the U.S.

I was born on October 11, 1954 on a ranch in Michoacán, Mexico. I remember the ranch was filled with animals, and plants that grew many different kinds of fruit. Although I was grateful for what I had, we were a family who wanted a better life. Most days were hot and I would have to work for my dad constantly. I would have to take care of my horses and cattle. I would have to pick fresh fruit, and overall, take care of the ranch. I didn’t go to school because education was not a big deal where I lived, so every day looked like working days. I spent most of my years on that ranch, and it has been attached to me ever since.

When I was around 19 years old, my cousin who was already in the U.S., came and invited me to go with him. Although I had no idea what the U.S. was, and how dangerous the journey was, I agreed. My cousin told me that there were endless opportunities there and I would be able to make money to provide for my family, start a new life, and have a better future in general.

I had so many emotions going through my head at the moment. I was super thrilled with the idea, but also very devastated. I had to leave my family behind. I told my parents No te preocupes, volveré para ayudarte. Te amo mucho, do not worry and that I will come back to help you, I love you a lot. These were the last words I said before I started my journey.

I remember leaving feeling lonely, nervous, scared, and guilty. I was constantly thinking, what was going to happen? Will I make it? I don’t even know how to speak English! I will regret this later. I had no idea what was ahead of me. I walked for 3 days with little food and water. It was really hot during the day but really cold during the night. I was scared for my life that I would either get caught, or get bitten by a dangerous animal during the trip. My legs were so swollen from walking too much and I was so tired to the point where I had to stop completely. There was so much fear that was in me that I couldn’t fight it. We had to hide and sleep on the rough, rocky ground that smelled like death. There were many dangerous animals like snakes, spiders, and scorpions. The idea of snakes and scorpions terrified me ever since I was a child. My brother died because he was bitten by a snake. I would always be reminded when I saw one. The sadness from the past followed me here to the present; my fear and guilt crept on me through the whole trip. Nothing about that trip was happy. I would cry once in a while because I was miserable. I had no one to put my shoulder on; I was hopeless.

Halfway through the trip, I stopped at Tijuana. I stayed there for 5 months to rethink what I was doing and what I was actually going to do. Then, my worst nightmare at the time came true. I got caught crossing the border. Imagine what emotions were going through me. Thoughts running through my mind, This is the end of me. I let my family down. What am I supposed to do now?  I was scared to death. My dreams, my hopes down the drain. It was over.

I was soon held for 3 months for trying to cross the border. At the time, all hope was lost, I was mad at myself for ever thinking that I could have made it. I thought and thought and soon realized that I could not let myself give up. I was too determined to let my dreams go. When I got released, I had decided to try again. I was not about to let my hopes down. I took a big decision of my life. This time, I prayed and prayed that I would make it. I knew that if I got caught again, my life would never be the same.

This time, I knew I had to be careful. I prayed and prayed for God to be with me. I had to make the same dreadful trip, the fear, the anxiety, the tiredness, and all the running. As days passed by, I made it closer, and closer to my dream. I felt like giving up each day, but here was something in me that told me not to. Four days later, I made it to the U.S. So much happiness, so much joy I had obtained like never before. There was a need to cry and so I did. Anyone who made here in the U.S. did. I made it to the next chapter of my life.

The journey was not easy, let me tell you. Now that I think back to it, I can’t believe I did that. I would have never guessed what my future was leading me to.

When I arrived, I had no idea what I was doing with my life. I hopped on a bus and headed to my cousin’s house in Redwood City. The streets in the U.S. were really different than the streets where I grew up. The U.S. was like a parallel universe. So much joy and happiness filled the sky. The warm sun reminded me of home, and many restaurants here had food that reminded me of home as well. My first couple of years were hard because I obviously did not know how to speak any English. I would always think to myself, How do I start a conversation? How do I say this? I was constantly scared of speaking to anyone because one, I had no idea what on earth they were saying, and two, I had no idea what to say. On top of everything, I had to learn the culture. To be fair, I loved learning new things about the U.S. One of my funniest memories I had, was that I was in love with the restaurant, Jack in the Box during my young years. I remember eating it all the time when I first came here. Although I tried new food, I really missed my hometown and my mama’s homemade food.

When I was 21 years old. I met my love of my life. From there on out, my life changed. She is so supportive and I would have not asked for anything better. I am so thankful for her. She has been here for me; she helped me get through tough times and made my days easier. 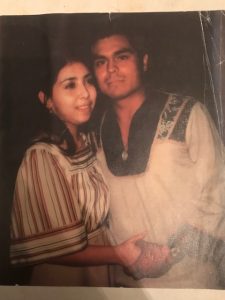 My grandma and him when they were young.

Once I was stable enough, I decided to get my first job. A real job. I was working at a plant nursery. I soon realized that it was not my thing. I later ended up working as a baker. This became my passion and worked in a bakery for 22 years. I knew a lot and I even passed down some of my recipes down to my family. I really loved baking and it soon became my new hobby and passion.

When I was 35 years old, I am happy to say that I became a legal U.S. citizen. It took so much work. My dreadful experience did pay off. I am still traumatized when I hear the word “hide” or “run.” My running and hiding helped me here in the present. My past shaped who I am today. I am strong, I am happy, I am thankful.

Today, I am more than grateful to have a family and a blessed life. I am happy that I became a legal citizen and that I am able to spend my life with the people who make me happy. I am also sad that my parents are gone. I wished that I would have spent more time with them. Life is filled with its ups and downs. If I would have not created that type of determination, I would not have ended up here.

Currently, I work at the park of Shoreline in Mountain View. I love being around nature and being able to work near my passion. I have 5 beautiful children who make me happy. I fulfilled my dream of coming here and being successful. I hope that my children will grow up with determination and happiness. My life could not be better. To have this experience made my life way more worth living. I am so thankful for this and want to tell you that you can do it if you believe and do it. Anything that knocks you down, you have the strength to rise back up.

The story of Ramon Silva was written and recorded by his grandson.