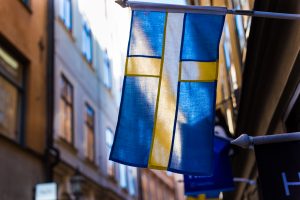 On a sunny, bright, beautiful day I was watching TV, my parents walked in and asked me to pause the show. They then told me that we would be moving to America the next summer. When they told me, my mouth hung open not knowing what to say. I struggled to find a response, and I just said that it would be cool but, I would miss Sweden. My parents delayed telling me the most important part about the move until towards the end of the conversation: my dad wouldn’t be coming with us to America, because he needed to stay for work. I went to my room and didn’t come out for hours. I didn’t know what I would do if he didn’t move with us. I care about all my family and not living in the same country with them would be hard. The next day my parents talked to me about how it would be fine, that he would visit us and it would all be okay, but I didn’t feel like it would be okay.

During the rest of the time I was still in Sweden I tried to live normally and be happy about the move, but knowing that everything was going to change soon made it hard to stay positive. I tried to hang out with my dad as much as I could before we moved, but it was hard knowing that I would be leaving him. Finally, it was time to pack all of my stuff to get ready to move in two weeks. I started packing all of my stuff that has been in my room for years and I had gotten so used to. They were in boxes for a couple of weeks before we left. My room was empty, but felt more than just empty – I had so many memories and it felt like they were all I had from this room. When it was time to say goodbye to my dad and to leave the house, it was the hardest thing I had done in my entire life. I wasn’t going to get to see him for a while and I had to force myself into the car to the airport.

The eleven hour flight felt like twenty hours, and was uncomfortable the entire time. Once we finally landed it sank in that we were here and this was going to be my home now. I didn’t fully know if I liked it yet. We rolled our luggage out front of the airport and saw the massive parking garage. In that moment, I realized how big the airport really is and was surprised at the amount of people walking through going to get on flights, getting off, or waiting for family or friends.

Once we arrived at the house that we would be living in, I was surprised that each house around it was close to identical but with small differences. It felt unlike homes in Sweden where each house was unique and felt comforting. I immediately wished that either we didn’t move or that my father moved with us. I only left the house a few times to look around before school started.

The day school started, I reluctantly got out of bed and brushed my blonde hair, and put on jeans and a T-shirt, and walked out to the kitchen where my mom had already prepared breakfast for me. I quickly ate and then dragged my feet out to the car and we drove to school. When we arrived, I looked at my schedule and found my class. I sat in the back far away from people. Once the class filled up, I realized that there weren’t many people that had similar features as me, like there was in Sweden. I found it to be odd, because I was used to having the same hair color and similar facial features to many of the girls at my old school.

The girl who sat next to me started talking to me and I was caught a little off guard by her trying to start a conversation, but I responded and we talked. I mentioned that I was new and she said she could help guide me around right when the teacher began the lesson, and I realized that she was very similar to me. During lunch that day, she invited me to eat lunch with her and her friends and they were all really kind to me. Meeting nice friends on the first day helped me not miss my father when I got home and they helped me for the rest of high school. If I was ever feeling down about my dad or anything else, they would be there for me. Overall, my friends and and mom are what got me through the move and helped me with missing my dad.

This story is based on an interview by Ethan Marik, a student at Palo Alto High School.