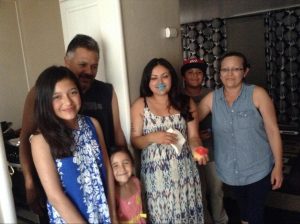 Here you see me (on the far right) with my family celebrating my daughter’s birthday.

There’s a mother named Flora Bravo Garcia,(name changed) struggling to keep her life as best as she can. Will she make it in the U.S. ?

I was living in Jamay, Jalisco, Mexico, in 1980. My life was great as a child. I would play in the mud, and my friends and I would play outside when it rained.

As years went on,  I started to go the park a lot where I played tag with my friends. I went to a Catholic school in which I learned very well, with the smacks the nuns would give us if we didn’t listen. My family was not very wealthy, but we had enough.  My dad had bought a lottery ticket at the store and he won the jackpot of 400,000 pesos or $20,000. At this time, this was a huge fortune. With all this money, my dad decided to buy a brand new sports car. We were all very mad at him. He could have bought us many other things or multiple houses, but he wasted it on a car in which he crashed 5 years later. I felt very angry towards him.

My house was very nice, it had 3 rooms. One of the rooms was for my mom and dad, one for my sister and I, and one for my three brothers. I shared a room with my annoying sister, who was a nightmare, always bossing me around.

As years went by, I matured, I went to the plaza a lot, and saw a man who would wink at me. I really started to like him. He was the rich kid of the town; he always had those nice polished shoes, those nice shirts, and those nice Levi’s jeans. We met at a party where he asked me out, but I already had a boyfriend. I told my boyfriend that my parents were very strict, that they did not allow me to date at this age of 15. So I left him and went with the other one named Roberto Bravo. We were so close and in love, that at the day of my quinceañera, I left the party to go out to the beach with him.

As I started to learn more about my boyfriend, I found out that he worked for what he got. Even though his father was rich, he did not give him much money. His dad made him work in the hot sun, picking fruit in his farms all day. Then after a long day after working, his dad would pay him. We were so in love with each other, that we moved into the house that his father gave him.

At the age of 16, it was 1987, I got pregnant, and had a small girl named Maria (name changed). One year passed by and I had another named Esmeralda (name changed), then another year later a boy named Antonio (name changed). My parents were mad at me for getting pregnant, but my dad was not home much and he would go work in the U.S. a lot. There, my dad worked in construction and earned lots of money. My mom on the other hand, loved taking care of my children. With my three children, I felt pressured because I was young and had to take care of three kids. Although it was a struggle, I loved my children very much. By then we got married and we decided to open up a store, there we sold materials for construction like cement, dirt, shovels, etc… Nine years passed and my mom had died, so that got me depressed. We were also stressed about how we owed lots of money because we let customers buy now, pay later, but they never paid. People would come to the store and say “Regresamos nuestro dinero!” Give us our money back! I would respond with, “Ay Dios mio, que voy a hacer?” Oh my God, what am I going to do? I felt very sad and I didn’t know what to do.

In 2001, I had just given birth to my fourth child, my daughter Alejandra (name changed) and we did not know what to do to pay back the debt. We were extremely stressed, so my husband decided to apply for his Visa and he got approved, so he left to the U.S. for 2 months. There in the U.S. he worked in construction and earned enough money to pay everyone their money back.

Then since my daughter was just born, we decided to apply for a Visa, so we could all go to the U.S, since my brother wanted to baptize my daughter. The process took a month and we got approved. So with the only money we had, we bought tickets to the golden city: San Francisco.

We had arrived at the Miguel Hidalgo y Costilla Guadalajara International Airport where we were taking our delicious last bite of “tacos de lengua y tamales de puerco” cow tongue tacos and pork tamales, that were very delicious, had the best Mexican taste of juicy chicken and pork with a soft and sweet outer layer.

While at the airport, we saw a sad thing happen, the woman in front of us had been arrested for carrying cocaine in her suitcase. It was sad, because she had let her luggage unattended and as she said, “Por favor déjenme ir, alguien lo puso en mi equipaje, no fui yo!” Please let me go, someone put it in my luggage, it was not me! I said, “Dios mio, por favor ayudala!” Dear Lord, please help her!

We arrived at the airplane where my kids were scared to take off and my little daughter was crying. It was a bad flight, because after takeoff there was lots of turbulence, but when we woke up, we saw the famous San Francisco.

We had arrived at the San Francisco International Airport, where my children were hungry and we only had 5 dollars, we bought a delicious looking american style hamburger from Jack in the Box, that we all had to share because my little daughter was only 6 months old and we had to buy milk.

My brother “Sapo” Juan (name changed), picked us up from the airport and brought us to a 2 room apartment where 4 families lived, in Burlingame. We got a room and it was very small, painted white and fragile, so my husband, my baby, and I slept on the bed while the others slept on the floor.

I had gotten pregnant again, this time my husband was making more money, so we moved in to San Francisco with my other brother, Julio (name changed).

A year later, as we settled in, I went to the school district, where a woman helped me with enrolling my kids in school. She was very helpful, she provided tutors/support for them to be able to catch up on school. We had decided that we were tired of living stressed in Mexico, so we finalized the decision, we were staying in the United States!

I soon had my little son, Eduardo (name changed). As we lived there, the biggest obstacle was the fact that I had five kids and realizing that I could not work, that I had to take care of all of them in a new country. This made me feel very stressed and sad, I said to God, “Diosito por favor ayudanos!” Lord please help us!

Here in the U.S., I lived in San Francisco where there was lots of racist white people who looked at me weird and assumed that I did not speak English, so they made hand signs or tried to speak Spanish instead of asking.

The one food I loved that they do not have in Mexico, was Panda Express; it was delicious to me. When we entered the store, that delicious smell of the orange chicken would make me hungry.

Now I have my sixth child named Agnes (name changed).  My biggest success was my children, they are very kind and they are preparing for their academic careers; the fact that I gave my kids values and that they treat others with respect and equality is what I am proud of.

I encourage my kids not to get married and have babies at a young age, because you need to enjoy your life and go to school and get a good job and in school, “necesitas echarle ganas!” you need to put effort into things! My husband and I both hope that our children will make a mark on the world.

The story of Maria Bravo Nuñez was written and recorded by her son.