The Ideal of Art (China) 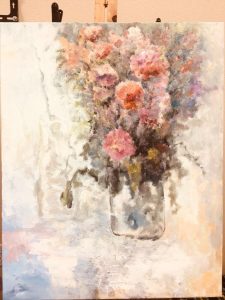 One of Miao’s painting.

When the idea of a personal artistic experience comes to mind, the first thing that jumped in my mind is Miao Sun. He was born in April 1972 in North China and came to America in 2015. His last name goes by his father, who worked in a reservoir, so his first name has a meaning of water in Chinese. He has the unique artistic painting that includes his ideal of art. One thing inscribed in his memory is the chicken nest he had in his house, when he was a little child. His family made very little money. In 1982, almost no middle class has been spread in China.

After that, food became more abundant. Miao helped his parents cook.  Ever since he was a child, he learned how to cook, and he can cook a lot of traditional Chinese food. Miao cherished everything, especially the Chinese New Year.

To celebrate Chinese New Year, the best ways are squibbing firecrackers and eating steamed meat. That could happen once a year, so it is very precious. Miao spent his time efficiently.  He likes to make aircraft models and ship models when it is his break time. And it motivated him to begin his artistic way.

A slight breeze of fresh, country air stirred across his face. In the branches above, he heard a few birds chirping. Miao thought creating ideas are in everywhere in the life. He discovered his hobby when he was in school, his friends around him found his talent and inspired him to keep designing on his artistic track. His fine art is special and expresses his many ideas and creativity. He loves all his paintings, because he has passions to do his work. His projects led to him getting  admitted by an excellent art school. The art school taught him much more professional skills that develop the expertise and the way to study things. He had decorated the project for a company and painted a magnificent painting for an agency. Those achievements enabled him to catch his dream.

Behind his wall, Miao is a funny person, and especially loves kidding. I don’t know if all of the artists are very humorous, but his body is full of humor cells. He is very proficient in history; he usually combines history and his humor into a new attractive argument, and it brings many stories mixed with humor and knowledge. Language is often viewed as power, and with this type of artistic language, his outgoing, warm-hearted, and charmful nature built an amusement ground, so everyone loves to be friends with him.

Miao came to America as a legal immigrant in 2015. The reason he came to America is for a better development to achieve his dream. And also, for a good education for his child. His life in the U.S. is meaningful. He had a studio for working hard at doing his art. Miao was very satisfied with painting and insisted on painting. He didn’t care about other people’s eyes. He pursued his own unique art. There should be no directly scoring standards for art. “Sometimes things cannot be done by just keep trying, you should have chance, experience, ability, economy, time…etc. So you need many things to achieve the successful goal,” Miao said. Those are the things that will be met in the future, and the perseverance is the most important merit for learning.

The story of Miao Sun was recorded by his daughter, Xun Sun.