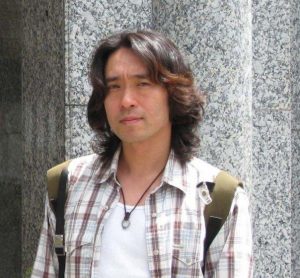 It has been quite a while since I started drawing again. Drawing illustrations, not the bird’s eye view of a house’s interior design, but instead the things I enjoy drawing. An angel with enormous wings, the messenger of a higher being, the messenger of light itself. I did not plan this one at all. I picked up a 2b pencil and started drawing, like how I use to do when I was young.

There weren’t many channels back then in Taiwan. Most of the cartoons were Japanese, for Taiwan did not have their own cartoons back then. Believe it or not, I still marvel at the very first Gundam when he appears in a commercial on TV, or the members of Gatchaman.

Those were the things I admired since kindergarten, those were the things I copied. The more I copied, the better I am at drawing. I drew when I sat on the cold floor in the humid apartment while watching my favorite shows. I drew during class, passing the drawings of the cartoon characters that my classmates requested to them, and often getting slapped on the wrist by the teacher as a result. But that didn’t stop me from my dream of being an artist, in fact, it fueled the fire in my heart.

The main frame of the angel was complete. He sat on a rock, staring at his feet. His long hair hanged from his forehead, untidied and tangled. His eyes were closed. His body muscular, but he slouched. His shoulders hunched forward. He looks like the man in the mirror, if not, he looks even more confident. He was weary. He was sad. He was pondering, perhaps about his past.

Moving to the U.S. did not scare me a lot, in fact it felt like an escape. An escape from Taipei’s gray skies, the humid weather, the burning sun, the pouring rain during summer time. An escape from the strict grading systems, from the terrifying teachers that beat students as punishment for coming to class late, for talking in class, for not reading the passage loud enough.

But saying goodbye to my friends was hard for me, saying farewell was never easy for me. I did not know whether or not our paths will cross again in the future. Sometimes I felt sad for them, because I escaped, but they stayed. America felt like a new start, a land of opportunities. Sometimes I enjoyed living alone in Palo Alto as a 14 year old, even though I have to cook for myself everyday, buy groceries, and do my own laundries. I enjoyed going to school. There were actually art classes in the U.S.! I took every single art class Gunn High School has to offer. Oil paintings, sketches, sculptures – I tried all of them.

People of the land of liberty actually care about my dreams, they actually care about my passion. The teachers admired me, and I admired them. Three art classes each year, that’s how I planned to finish high school. In the U.S., this was where I would achieve my dream of being an artist. I thought the passion in my heart burns as bright as a wildfire, but in truth it was only a spark. A spark that would die when stepped on.

The details were finished. The angel hung his head, eyes closed, and frowned, but he didn’t cry. His wings folded neatly, but the feathers fell off, paving the ground white. In his hand he held onto his halo, which emitted a dim light, a light just bright enough to see the mistakes of mankind.

It was during my senior year of high school when my father visited me. I was overjoyed and excited to meet him, for I have good news to present to him. But almost suddenly, my father’s smile faded when he realized that my “good news” was that Parsons was willing to give me a full scholarship through college. His eyes twitched when I mentioned “art major.” He never realized that drawing was more than a hobby for me, it was my dream, my passion.

“I rather you be an ordinary businessman than a poor artist!” Was his exact words. I respected my father, I feared him, so I did not speak my mind. I thought he would have noticed my passion for drawing then, but he never did. I never attended Parsons, I studied economics at Davis instead. I worked for my father’s company after college.

Later I started to build and flip houses, worked on real estate. I was never an artist, never a painter, never an illustrator. I never had the opportunity to put a smile on a child’s face, like how Gundam made me smile when I was a kid. My dream faded, maybe I was never meant to draw. I was thankful for my father’s decision for me. I have money in my pockets. I am able to eat three times a day, and I am capable of supporting my family. But deep inside, I know that I never became the person I wanted to be.

The drawing was finished. The pale feathers of the majestic being covered the ground, like leaves on the streets during Fall. Tears rolled down his cheeks. Snow descended from the heavens. The ominous sky was dark, the moon isn’t bright enough to reveal the pains in the angel’s heart. But the halo glow, it is dim and weak, but it illuminated the whole painting. Maybe one day the halo will glow brighter, maybe one day it will outshine the stars in the sky. If only, if only the angel was not rebuked by God. If only he was rewarded by following his heart instead of being cast out of heaven.

Maybe the angel does not understand God’s ways, maybe he is meant to be shut out of the gates of heaven after all. The angel can ponder as long as he wants, but would he ever get the answer he wanted? Would he get the answer he deserves? It was a rather sad drawing, a drawing that made my heart ache, a drawing that made my hand quiver when holding the pencil. But I am proud to say that it is beautiful a drawing, and breathtaking also.