The Children Are Succeeding and That’s Why We Came (Mexico) 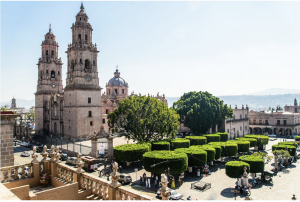 I was in a caravan with my wife along with 70 people. Everyone came from different places. I came from a small ranch named San Miguel Michoacan. I was 21 when I decided to leave in order to give my family and my wife the best by giving them a good education. I was ready to work hard to give them the best. I lived in a very poor neighborhood along with my parents. I barely had any food to eat and if I had food it was because I would work to get money. We would eat fried beans with tortillas. It was simple but they smelled delicious as if it was the best meal that ever existed. My house was surrounded by crops and horses because I lived in a ranch where everyone knew each other. I would save up money to go to parties but that was once a year.

I was 21 when I was leaving Mexico to go to the US to give my family a better life. I was scared and sad because I was leaving my family behind and they were always there for me. I had left my job that was working in the fields and taking care of my cows. My wife and I were ready to leave and start a new life even though the coyote told us it was going to be hard to pass the border. My parents said they wanted the best for me and if that’s what I wanted they were fine with me leaving. I was very sad but there was nothing to do. They cried but I knew I had to leave.

They would tell me, “Te queremos mucho siempre acuérdate que vamos a estar aquí para lo que necesites” We love you very much, always remember that we will be here for what you need.

This time I was not leaving alone. I was taking my beautiful wife with me. I knew that this was goodbye for good that I was no longer going to see them because I had a family. I thought to myself, “Siempre los voy a extrañar los amo” I will always miss you guys I love you.

When I was saying my last goodbye my mom told me, “Siempre voy estar contigo te quiero mucho” I will always be with you, I love you very much.

I left my home along with my wife around 10 pm. I was thinking about how the journey was going to be on the way to the US. We got to the place where the coyote was going to meet us so he could help us. A coyote is a person who helps you cross the border through the desert. We were all ready to leave, there were 70 people moving to the US.

We were all very excited and scared to cross the border. At the time my wife and I were really scared because she was pregnant and we were terrified that she would have a miscarriage because everything she ate she would throw up. She was 3 months pregnant at that time.  She knew that she was pregnant but still took the risk in order to cross the border. I was very scared that she was going to lose the baby because he was going to be our first child.

We were all very tired and exhausted from walking for 2 days through the desert. We had very little water left and some people couldn’t walk anymore. We would take breaks once in a while to get energy and not be exhausted.

The coyote was very nice and left no one behind, every one got to their destinations. He would give us his water and food because some of us didn’t have any left. The water tasted refreshing and delicious as if it was the best water in the world. It tasted very good because I was dehydrated and very thirsty.

We had very little problems because immigration did not catch us and the journey was pretty calm for the most part. Even though immigration didn’t catch us we were all scared because we didn’t know if we were going to make it out alive. It was very hard to keep on walking for days because it became harder to walk on sand. I felt as if my legs became the heaviest weight I had to lift in my entire life.

When I first got to the US the coyote brought me to LA.  My sister picked my wife and I up and took us to her house. It was hard to find a job but my brother told me he was leaving for Mexico and he was going to leave me his job as a dishwasher.  Thanks to my sister and brother I got to settle down fast because I was able to rent a house in Pittsburgh 2 months later, and I had a job. I worked as a dishwasher for 5 years and then changed my work to construction.

My sister told me, “No se necesitas mover aquí te puedes quedar” You do not need to move to anywhere you can stay here.

I replied to her, “No está bien es mejor asi para que no moleste” It is not right, it is better so that it does not bother.

My wife had our first baby boy named Juan (name changed) and we were super happy. He was a boy and looked beautiful. He had black hair with brown eyes just like his mother. He had my skin tone that was light brown.

Right now in 2020 I am very happy but sad. I am very happy because I have 3 beautiful children. I was sad because I wasn’t able to see my parents and they passed away. I started to cry because they were very important to me and are always going to be a part of me. My kids and wife were there to cheer me up and tell me that everything was going to be okay. I am very proud of my children because they’re doing good in school and my oldest boy is going to college and that’s what I always wanted. My dream is for my kids to have the best future.

I work hard every day to give my kids the best because I want to give them the things I couldn’t have as a kid. I always tell them, “Quiero lo mejor para ustedes quiero que se superen los quiero” I want the best for you guys. I want you to have your career.

My kids  told me, “Siempre los haremos sentir orgullosos de nosotros” We will always make you and mom proud.

The interview was conducted and then the narrative was written by his daughter, a high school student.