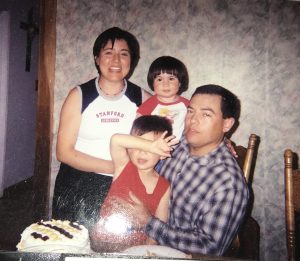 Here is my dad in the blue flannel, my mother, Adriana, on the left, my sister, Xochilth ,at the top and me at the bottom.

My father started his life in a small town in Mexico named San Joaquin. It was there where he grew up with his 6 brothers and 5 sisters, everyone different from the last. It was a poor town where he and his family  lived. There were no paved roads, everything was just mud, dirt or rocks. There was trash everywhere, unbelievable amounts of it. Loose dogs barking day and night, sometimes roadkill because of drivers not caring. Jobs only as farmers as there were no building taller than 5 meters. It only took 16 years to decide he wanted something else. He got tired of going to work in the fields everyday after school, knowing that no matter how much work he put in, everything would remain the same. He made a call to one of his brothers, Jose, that lived in the US that would change his life and of his parents.

He called his brother saying, “José ayúdame, ya no quiero estar aquí, quiero ir contigo vivir aya” meaning “Jose help me, I don’t want to stay here anymore, I want to live with you over there.” By over there he meant the US. His brother already made the journey of coming to the US, so he had to do it again for his brother. And it was there where the journey began.

After his brother came to him they went on the move, bringing nothing but some petty cash with them. They were determined to make it all the way to San Ysitro, California. They took the train from their hometown to Guadalajara and then to Benjamin Hill, then to Tijuana. He was lucky enough to have a cabin in the train, where he and his brother could sleep together. It was a long and tiring 2 days of doing nothing but spectating out the window and looking at his country, seeing nothing but fields of dirt or grass. After their finally stopping in Tijuana, it was either do or die. My father has heard stories of people crossing the border and getting shot at. Lucky for him, he was fearless. He did not show any sign of weakness, a trait that is very hard to come by. They traveled by night so they would not be seen by the immigration police or by “la migra” as he calls it. It was a long wary night. They would always be on alert, looking back and forth, ducking down flat on the ground if they heard any noise. A whole six hours of walking, running and hiding, all that for a better life. He was worn out, his feet bruised, dizzy, but he knew that there was only a little bit more left. They saw the sun rise and it was then when they realized they needed to run. Run as they’ve never run before. They ran, ran as hard as they could, knowing this could be it, but they kept their heads up and made it. They soon traveled to San Ysitro and then to  Mountain view, where his brother lived.

The next thing that happened really shocked him. His brother had enrolled him in school, something that was never on his mind. He only came here to work, but he would later realize his mistake. He did both work and go to school. He could not comprehend English so well, but he did know something. He knew how to greet and nothing more. He learned English by just talking and of course taking classes, but he said just listening to others was more helpful. He told me one story that really stunned me. He told me that he was on the verge of not graduating high school. He told me he was failing physics and he need to pass that class to graduate. He told his friends about it and nothing more, he did not ask them to do anything about it. What his friends did next blew my mind. They went to talk to his physics teacher and made him help my dad, knowing that he wasn’t doing that well. Because of that my dad would go every day or so to his class so that he can receive help. So a couple weeks passed and it was test time, he took the test and passed, all thanks to his friends. His friends really did make an impact on him, it was his friends that allowed him to graduate and achieve something that his family never would.

He did not know much about America, only that you could find a job and making a better living than he was already in. He was happy in the first time in a long time. Yes, he was far away from his family, but he kept in touch with them, telling them how his day was everyday. He unfortunately  did not have the time and money to go to college, but he did manage to find a stable job as a librarian and meet the love of his life that would be my mother. He and my mom were always friends back in the day when they were teenagers, but when he heard that my mother had moved here he just had to go and talk to her. They talked and talked until they finally confessed their love for each other.  A year or two later I was born and a couple months after that  my sister. They moved from their apartment in Mountain View, into East Palo Alto, where we now live.  He and my mother did not have the money to buy the house, so they asked my friends and family for money to help with the purchase.  In the end they finally got the house and got married after knowing they were soul mates.

I ask my dad to look back at his life and asked him if he expected all this to happen. He said no, he did not expect to be the first person in his family to graduate from high school, have a stable job, a wife, kids and a house. My dad told me that you can do anything you want to be, but you have to put everything you have in it. That is why my dad has pushed me to do my best, so that I could go to college and achieve something he could never do. My dad has made many long lasting friendships, and has made this family of four very grateful.

The story of Luis Aguila was written by his son, Juan Aguila.