Immigration Story Christina Bergmann: Sweden to the Land of Disney 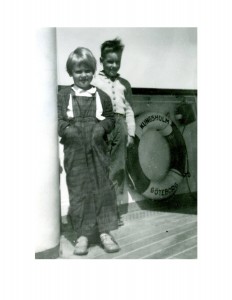 The year was 1954 when Christina left Sweden where she had spent the first six years of her life. The sun was high in the sky and reflected off the huge boat bobbing in the port. Her hands were clasped over a suitcase handle as she and her family walked on the boat with hundreds of other people. She looked back sadly at the town where she grew up, she wanted to stay but knew she had to leave with her family. She lived in Trollhättan, a somewhat large town that got its name through the lore of trolls living there. She lived in a four-story, yellow brick apartment with no elevators, so they had to climb the stairs. She has memories of her mother doing laundry in the basement,using bangles which are electric wheels that ring out your clothes. Life in Sweden was good.

Some of her most vivid memories are when her father read bedtime stories to her and her brother Tom, in the room that they shared. She loved how great the feeling was to be read wonderful stories like Pippi Longstocking. During winter, when it is very dark and dreary, there would be someone from the neighborhood who would dress up like Tomte, (Santa). Her parents would leave a basket of gifts on the porch and when Tomte came to their house, he would take the basket and distribute the gifts to them.

In July 1954, they began their voyage to America on a boat that was named KUNGSHOLM. It was a fancy ship and surely cost a lot. Her parents had been saving up for the trip for three years which was the only reason they could afford it. They left because her father believed that they could have a better life in America and make more money. Also, her father felt like he didn’t fit in in Sweden because he was originally born in Poland and carried with him a strong accent even though he spoke Swedish very well. Her mother also wanted to move but mostly because of the weather. Sweden is dark nine months out of the year with only a few hours of daylight a day in winter. Her mother was hoping to have all year sun so that she could sunbathe.

They set off, the voyage took 9 days. There was a pool on the ship. She didn’t know how to swim, she had to go on her father’s shoulders it was a very scary experience because every single time the boat moved and swayed, there would be large waves in the pool. Another experience was when they were eating in the dining room. On the menu, she ordered something called grapefruit she had never heard of it before and for some reason thought it was some kind of fancy soda. She ordered it tried it and thought it was horrible, she was not expecting it to be so sour.

On the boat ride, there was a holiday that most Swedish people celebrate called Midsummer. It’s the longest day of summer. After cold and dark winter they want to celebrate this day. She dressed up with her family in dresses and aprons and celebrated with dances. They even brought a pole up on the boat called a maypole and would dance around it to celebrate the summer. On the last day, they were anxious to port. When they got of, her uncle picked them up.

As new immigrants arriving to America, they had to be sponsored by someone living here. Her uncle lived on Long Island and sponsored their citizenship. They stayed with him for three weeks but her father left after three days to look for work. Their house was really nice and he and his wife spoke Swedish. They had a television. My grandmother and her brother thought it was the coolest thing. It was only about 8″ x 8″ which is much smaller than today, but she loved watching it. They were introduced to the Disney shows.

When her father found a place to live and a job in California, they took the bus all the way from Long Island. She said it was very hot and it took two whole days. She noticed that there were cars everywhere during that bus ride. There are no cars in Sweden so they were very new to her.

They moved into their new apartment and after a short time, were able to buy a house which they owned for several years. She picked up English very quickly playing with the neighborhood kids and was soon very fluent. Her parents had already learned English in the years they had been saving up and planning for the trip.

The family was very happy in America. They didn’t have a TV in their house so she and her brother went to a neighbor’s house. One night she saw a commercial for Peter Pan peanut butter. They had never heard of peanut butter, so after they went home, she and her brother they asked for peanut butter. Their mom spread it over Rye Bread, which they always ate. They didn’t know that you’re supposed to spread it over white bread and so they thought it was disgusting when they tasted it.

Nowadays Christina would like to continue doing her art which makes her happy. She would also like to start playing the piano again. And of course travel more. She has loved traveling her whole life but would like to take a trip to Sweden soon and hopefully go to Poland at the same time. She wants to go back to the town where her father was born and where her grandmother was buried.

This story was written by Jayden Gaulocher-Bergmann about his grandmother, Christina. Jayden is a 9th grader at Everest School in Redwood City, CA.