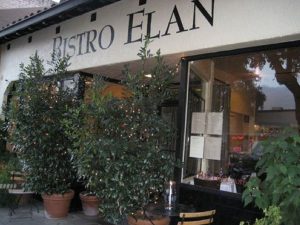 In 1981, Ambjörn Lindskog, a nuclear physicist from Sweden, took a plane to America, starting a chapter of his life that would change him forever. Although he did not know it at the time, the American dream would inspire him to do do great things, and would drive him to achieve things he never thought possible.

He was born on June 10, 1950, in Sollefteå, Sweden to a mom that was just 17. His dad left before he was old enough to know him, and his mother, Gudrun, married a new man named Göte Lindskog, a narcissistic man who favored his biological children over Ambjörn. His mother was an aide at his school for disabled children, while his dad was the principal. He lived in the northern part of Sweden in a town called Ostersund and “I spent a lot of time playing with my friends” he said. In the winter time, he spent a lot of time reading, and building things in his
garage, because it was frequently -20° fahrenheit outdoors.

One winter, Ambjörn and his friend spent four months making a wooden canoe, which immediately sank when they tested it in the summer, forever gone into a river. As a kid, he was free to roam around, and sometimes hitchhiked for multiple days to get to his grandmother’s house. When he turned 15, he got a job with his best friend Ingvar washing cars for workers at the sausage factory near his house. Sometimes, while the workers were still working, they would get into the cars and drive them around in the parking lot.

Throughout his childhood, he would always be engaged in typical teenage shenanigans around the town with Ingvar, and he was quite happy.
Unfortunately, this culture of unregulated freedom caused some problems. In Ostersund, there was a lake that was controlled by a dam, and in the winter, the lake would freeze over.One day in winter, Ingvar’s little brother was playing on the ice with his friends when the ice broke open, swallowing him whole. He was sucked into the water outlet of the dam, and his body was found later that day on the banks of the river below. This tragedy was very hard for Ingvar and his family. “The family kept the casket of their son’s dead body in their home for a
week,” Ambjörn said, the family crippled by grief.

Another year, a child who lived next door to Ambjörn’s house was playing with one of their parents rifles, when it accidentally fired and killed
another kid who was in the house with him.

Ambjörn was able to obtain good grades at his high school, and was accepted to the prestigious Royal Institute of Technology in Stockholm. There, he studied for four years and received a degree in nuclear engineering. Because of the Three Mile Island nuclear power station accident of 1979, he soon received a job in Palo Alto, California, where he would be conducting safety research at the Electric Power Research Institute. Before accepting, he talked to his family about leaving. “They were sad and they were happy… It was a good job, but they were sad for me to leave.”

When he first arrived in America, he stayed at the Cowper Inn in Palo Alto, for a couple of months. He worked at EPRI for 2 years, and during that time he started experimenting with fixing up cars, carpentry, and many other things. After working for two years at EPRI, a restaurant went up for sale near the Palo Alto Courthouse. In the spirit of the American dream, he decided to give up his good engineering job to buy it, naming it ‘Cafe Pro Bono’. At that time, “I really felt like I could do anything, because in Sweden, everything was a
lot more structured, but in America I was more free to be creative and do whatever I wanted,” he said.

After two years running Cafe Pro Bono, he was stressed out. He had no prior experience in culinary arts, and decided that he needed to gain more official experience being a chef in order to run a restaurant more smoothly. He sold Cafe Pro Bono, and started working at a fancy French restaurant named 231 Ellsworth in San Mateo.

While working at this restaurant, he was invited to a dinner party with Marc Meneau, a famous three Michelin star restaurant owner from
France. While having dinner, Ambjörn asked if he could train at Marc’s restaurant in France. Marc responded “Get rid of that beard, bring your chef coat, and you are set to come.” Later that month, he was off to France, where he trained for six months working in the restaurant as an apprentice. Every day, rich people from Paris would travel in their private helicopters just to come to the restaurant, where they would be served in luxury by dozens of veteran chefs and apprentices like Ambjörn. “It was one of the most wonderful times of my life” he said, because
he learned so much.

After his training, he got a job as a sous chef in New York, at Hotel Pierre on 5th Avenue. He worked there for a couple months (this time being paid), when he decided to come back to California. Here, he met a young waitress named Andrea, who worked at Il Fornaio. They soon got married, and afterwards moved to New Mexico, where they stayed for 2 years working at the restaurant La Casa Cena. 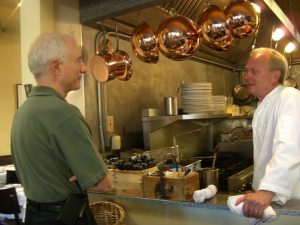 Ambjorn Lindskog is on right.
photo by Esther Dyson

After coming back to California (again), they started a restaurant named Bistro Elan, on North California avenue in Palo Alto. It was around this time that Andrea gave birth to their son, Samuel. For the next 11 years, they both ran the restaurant, until they decided to move their restaurant to a smaller location on Birch street, where they are still running it today.

When asked today about his experience with how the American dream played out for him, he responded “I didn’t think it (America) would change my life as much as it did, but when I came here, I found I was more free to be creative and do anything, which helped lead me to take risks and become successful.” The American dream is not always what fuels immigrants to come to America. However, the idea that a you are only limited by how hard you work, and that anything is possible with time and effort, can help to inspire wonderful endeavours that would not otherwise have been possible in another country.