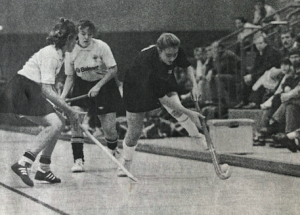 It was the year 1995; I was 27, young and hungry for adventure. I had graduated from college the year prior, and was living with my best friend and his sister in the town of Braunschweig, Germany. I spent my days either working, or playing field hockey. I’d been playing field hockey since I was 12 years old, and I had been on the under 18 national team. After that, I moved up and began  playing in the highest women’s competitive league of Germany.

I enjoyed my life; I had a stable job, friends, and family . I also had my boyfriend, Michael, whom I had been dating for four years. It was November when Michael told me that he was offered a new job in America. He said he was going to take it and he asked if I would join him for a year. I was shocked but excited; it seemed like an excellent opportunity for me to see the world and gain new experiences. I ended up saying yes. We made a plan where I would go to America in March to meet him, and we would live in San Francisco, California for one year. However, looking back, things never go as planned.

When the time finally came, I packed up my stuff and put my furniture and clothes in my parents’ basement. I had never been more excited in my life; I knew this was going to be a great experience. The night before I left, my hockey team threw a goodbye party for me; there were tears and smiles, I knew I would miss them and playing field hockey, but I thought I was coming back. March 30th, 1996, my parents drove me to the Frankfurt airport and sent me off with my one suitcase, filled with four or five outfits, a pillow, and a blanket, with their unconditional love and support. Eleven hours and thirty minutes later, I landed in SFO, where Michael picked me up. I remember driving down the 101 highway and seeing the “San Francisco the Industrial City” letters painted on a hill, and my heart started racing. I was officially living in America.

Michael had rented an unfurnished apartment two days before my arrival, and I slept on the floor for the first two weeks. I was alone a lot of the time since Michael’s job required him to travel around California, but I didn’t mind; I spent my time exploring the city. San Francisco was nothing like I expected. Coming from a town in Germany, I expected constant clear blue skies and a surf-culture, but I was caught off guard by the fog and the city rush. Nonetheless, I loved it; the large portions, the friendly people that greeted me in every store I walked into, and the large grocery stores that were open 24/7.

Michael’s company had generously offered me a job in Human Resources, but before I started, I took a language course at the Berkeley Extension Center to get better at English. I had studied English in high school, but lost most of it throughout college, because I never spoke it. The language barrier was the only thing that scared me about moving to the United States, but I was determined to master it. Everywhere I went, I carried around a small pocket notebook, and every time I heard a word that I didn’t know, I would write it down and look it up as soon as I got home. Additionally, every night I would watch Seinfeld and the Late Night Show with David Letterman and practice speaking, “Not that there’s anything wrong with that, master of your domain, we’ll see you after the break.”

I started my job in July of 1996, and I didn’t know what to expect. I worked in Human resources and was responsible for answering the phone and talking to people. It scared me because I was not yet that confident in speaking English, but it forced me to get better. Fortunately, I also instantly made friends at work, one being Dana Ali, a tall, large African American man, who made it his duty to teach me at least five new words every day. “Susanne, I got two more words for you to add to your little notebook!” I was content with my life and I never really caught myself missing home; however, I did miss playing my sport. I did some research and found a club at Stanford and decided to join the draft.

I took the train down to Palo Alto and when I got there all the other women and I were asked to scrimmage while all the coaches from the team watched us. The principle of a “draft” was new to me, and I was a little confused. However, it was apparent that I knew what I was doing and was no match for the other girls. Of course, the lowest ranking team had the first choice, and they immediately picked me.

Over the course of the season, I met so many people and friends that would last a lifetime. That season after much hard work, my team and I ended up winning the league, and we couldn’t be happier. The following year, a tall, handsome man from the Netherlands joined our team and sparks flew. Two weeks later I broke up with Michael and started dating the hockey player.

Before I knew it, the year had gone by. However, I felt like it was too soon to leave again and I had just started dating my future husband, so I decided to stay. Twenty-three years later, I never left. I am still living and working in California, married to the Dutch field hockey player with a 17-year-old daughter.

I stopped playing field hockey, but kept all my friends I made through that team, and my daughter now plays for her high school team. In hindsight, I learned always to make the best of a situation and stay positive; one can achieve anything he or she sets their mind to.

This story was written by the daughter of Susanne, Emma Siskens, a student at Palo Alto High School.