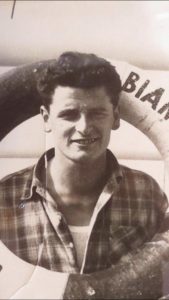 This story is based the real life of Marino “Gino” Pasin. He immigrated from Italy to the Canada in 1951 to find work.

I was 18 years old when my cousins, a couple friends, and I boarded the ship en route to Canada. The four of us had heard of these job opportunities in Canada and how Canadians were looking for immigrants from Europe to come and work. We packed our bags and headed to the ship. When we arrived, the ship looked ancient with the wood covered in spots which were consumed by insects, and mold covering the majority of it. When we set sail, it smelled like the salty ocean and sweat from hard workers. You could tell people appreciated this opportunity. We assumed it would take a while to get to our destination, and it did as it took a couple months to reach Edmonton.

It was a bumpy ship ride but our stomachs held their own and remained strong throughout the journey– the others did not fare as well. We had the entire deck to ourselves due to the fact that everyone else had gotten ill-ridden, and we could tell. Their faces were white as snow and a deathly look in their eyes and faces.  A month or two with the whole dock to ourselves was nice, we were able to look out at the ocean, or our destination if and when in sight. The food was alright and the sleeping arrangements were subpar, but the experience was something I will always be grateful for.

We arrive and get off the boat where we are greeted by people in officer uniforms who direct us to our next destination in Canada––Alberta. I felt fooled that there was another couple-hour journey ahead of us to Edmonton when I thought we had finally reached ours. We finally reached our last destination, and we were placed in a pretty big house, compared to what we had at home, and we went to sleep.

We were awoken by the officers, again, who gave us our list of jobs. I went first and chose my first pick where I got a job in construction almost immediately and started off by building bridges, buildings, etc. I got the privilege to build many of the city’s important buildings like Edmonton’s city hall, a major bridge which lies over the city, and some skyscrapers that helped make Edmonton look like what it does today.

Shortly after I started working, my friends were telling me about a girl who lived in the neighborhood with a similar last name as my own. Later that week, I was introduced to a girl who lived in my neighborhood, with the name of Arlene Pasoine, and I ended up marrying that girl. Once I was able to, I worked enough to by my house in full, up front which is something I have always wanted to do. A couple years after that, we moved to Haye River, Northwest Territories with my kid, Dave Pasin, for another job opportunity. I was working for a couple months until I suffered a severe injury.

While working one day in Haye River, I took a horrific fall off a ladder, which was holding me at about the 6th floor of the building I was working on, and severely broke my leg, knee, hip and more. I was rushed to the hospital where I spent months recovering. My son came home that day to hear the story of my fall, and my time ahead of me in the hospital. He wouldn’t be able to see me for very long, until I got well enough to heal at home. I had to have a lot of surgery and the most horrific one was replacing my hip with a metal one and overall, making me lose half a foot to a foot of height on my left leg. We eventually moved back to Edmonton where my son, Dave, played hockey for many years. Overall, my immigration story to Canada included a lot of obstacles, but my freedom and choices when I moved here were all the worth. I enjoyed every minute of living here despite the obstacles which tried to interfere. Never let anything interfere with your goals.

This story is based on an interview by Ben Pasin, a student at Palo Alto High School.