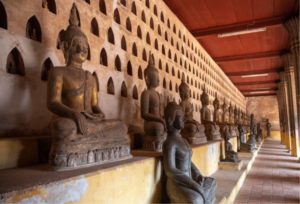 Robert is a first-generation Laotian refugee who has reached his American Dream of owning his home, being active in his children’s lives and saving for his children’s future. He has overcome many obstacles in order to be where he is now–working as a Chief Of Construction Services.

He began his journey here in San Jose, where he attended primary schooling and then started working when he was 16 years old to help provide for his family. As a first college graduate in his family, he completed his bachelor’s degree in electrical engineering with an emphasis in wireless communication from Cal State Sacramento. Soon after his graduation, a friend who owns a consulting firm introduced him to the job and he has been working as a consultant for 15 years now.

Robert is very proud of his team who he oversees projects together with other managers and has devoted to support the rest of his families achieve success and stability too.

Robert began his journey to the United States at the age of five due to the war and terrible conditions in his homeland. His family escaped to Thailand, where they waited for months in a refugee camp. Robert remembered that they lived and traveled with no resources and in poor conditions. Fortunately, they started their new life in San Jose, California where they had an American family as their sponsor. They were able to find housing, access to public benefits such as food stamps and other supports.

Robert remembered the day that his mother struggled with understanding how to use money in the United States. He remembered the pain he saw in her eyes not knowing how to pay a cashier to feed her starving child.

Robert is very proud of his decisions to focus on financial literacy within his own family. This was a defining moment in Robert’s life where he committed to ensuring that he made sound financial decisions to support his family. Robert learned at an early age that it is very important to be unselfish, to help other people without expecting anything in return.

As a Buddhist, he describes how in his community everyone at the temple lays a hand, demonstrating that there is a generous amount of help for one another. Robert is not only proud of his Buddhist community, but also equally proud of the immigrant and refugee communities, stating enthusiastically, “they don’t give up, every speed bump is part of the process. They push through all these barriers to achieve their goals… strong willed”

The interview and narrative were done by Karla Venegas.