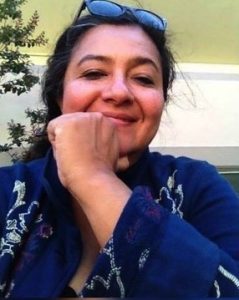 She is very short. She is 53 years old. She wears glasses to read. She likes to watch Modern Family. She teaches at Canada College. Her favorite color is black. She believes in God. She cooks good food. Sometimes, she takes my sister and I out to lunch/dinner, which is always fun and even more when we go to our favorite tiny ramen restaurant where she orders a soup and she is the only person who orders vegetarian anything. I think her soup is only water, but she drinks it with a smile on her face.

She calls her family in India a thousand times a week. She likes small dogs with big personalities. She drinks tea first thing in the morning. She hates selfish people and fast drivers. She likes to paint. She likes Johnny Cash. She hates doing laundry because she says she hates sorting clothes. Another thing she hates is her kids making messes. She loves swimming, but hates the rain. For 53 years, everyone has called her Anjana and for the last 17 years I call her Mom.

She was born in India and she came here in 1989. She came to the U.S. because she got married to my father and he was a student at Stanford. He was doing a Ph.D. and it was going to take him a few years to finish. She thought they were going back to India when the Ph.D. was finished. She was sitting with a pile of wedding invitations when she called her best friend and said,“Jasmine, you don’t have to come to the wedding if you cannot make it because I am coming back in two years to live in India.” Now it will be 30 years, on January 3rd, 2019, since she came here and she has lived here longer than she lived in India.

Some friends picked them up from the San Francisco International Airport when their Singapore Airlines plane landed. They took them to Stanford and then to a friend’s apartment for dinner. When I talked to my mother about it, she remembered that the apartment was very dark and the table was full of colorful dishes. Their hosts had cooked Indian food. They had called a lot of friends, and 8 or 10 people had dinner together. “It was the most crowded small apartment I had ever seen,” she said, “Everyone said it was Indian food but it didn’t seem like that to me.”

She started working because she got bored sitting at home in the apartment in Stanford. “Stanford was like a graveyard,” she described. After the noise and crowds of India, Stanford seemed too quiet. She opened the phone directory and called all the interior design companies and showrooms that she could find. One interior design office said they would like to meet her and called her for a job interview. They were in Mountain View. She went and interviewed, and they gave her a job to help the owner of the company.

She loved her job. She had studied Interior Design in India. Her father, my grandfather, is an architect and she used to work in his office. My uncle, her brother, is an architect. Interior Design was something she could work in and it was more fun than sitting alone in the apartment. The other girls who worked at the office were fun and cheerful and mom learned a lot about life in America from just listening to them.

Next to her office there was a McDonald’s. She had only heard of the famous McDonald’s fast food restaurants. On the first day to work, she went to the McDonald’s and bought a cup of coffee for 89 cents or 99 cents. They told her she could have free refills. She had never heard of anything like that. “We didn’t have things like that in India like 2, 3, 4 cups of coffee for the price of 1.” So most days when she worked at the office in Mountain view she went and got her two cups of coffee from McDonald’s. She says she used to hate coffee in the beginning, but she went out to buy it from the Mcdonald’s just to walk in the fresh air. Soon she started loving coffee.

“What I found most interesting when I came here was that whenever somebody says hello how are you doing, the person always says back I’m doing great. How can everybody be doing great all the time?” My mom complains. Another thing she found interesting when she came to the U.S. is that whenever two people meet they say, “you look great.” She knows they are being polite, but sometimes it makes her want to laugh, because how can everybody look great all the time. “Life in America is very busy,” she always complains. People are constantly running around trying to finish their work or homework or take care of their responsibilities.

Mom always tells my sister and me to make time for friends and family. “Look around you” she says. “People don’t have time for themselves or other people except maybe on the weekend. In India, people spend a lot of times with their families and neighbors.” I don’t know if that is true, but that is what my mother misses: going to meet family and friends on weekends and on festivals even if it means extra work. My mother admires that Americans travel to see America every time they get a holiday. She admires the fact that Americans love their country, because she remembers that when she was growing up in India everybody constantly criticized their own country. Maybe because she doesn’t live there anymore she talks fondly about the small town she grew up in. It was called Allahabad.

She has lived in Palo Alto since 1989 and Palo Alto has changed a lot in the past 30 years. “Everyone wants to exercise all the time,” she complains. I tell her it is not a bad thing to exercise! She says all the bookstores are gone and even though there is the big university here, everyone now orders books from Amazon. “All the stores that sold art supplies, stationary, etc. are now closed and only stores that sell food or exercise classes have opened in their place. This tells us a lot about what has changed in Palo Alto.” People complain that Palo Alto has become very expensive to live in, but Palo Alto was always an expensive town. She says what has changed in Palo Alto is that now more people spend all their time eating out, shopping, and exercising. It sounds like my mother complains a lot but I also know that she loves this place. When she meets someone else who complains about Palo Alto, she defends it by saying “the town is great, it is the people who live in it that keep changing.” I think by that she means that you can’t just blame a town and you have to also think of what the people living in the town are doing.

After completing her Masters in Fine Arts from San Francisco, she started teaching. She teaches Interior design classes at Canada College in Redwood City where she has taught for 20 years. She also taught in San Francisco and New York. She is going to get a brass apple this year from her college and she is looking forward to that even though another teacher told her a “brass apple is no good, you can’t even eat it”.

“Everybody in America feels good about belonging to their country America. You have the special opportunity of being American as well as Indian. I know you love America and India both. It is a wonderful thing to have two countries instead of one country in your life,”,says my mother. I agree with that. I am so glad I have two countries that are my home and they are United States and India.

This story is based on an interview by Aru Madhav, a student at Palo Alto High School.