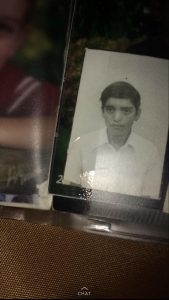 In pursuit of a better life, Ramon Martinez migrated to the U.S. from Cañadas de Obregon, Jalisco when he was only 15 years old. He went from living on a small ranch, where everyone knew each other and he worked on a farm with his father, to abandoning that life in pursuit of the American Dream.

Ramon remembers life in Mexico as being calm and worry-free, with a close knit community where everyone knew each other. It was a happy place, one where people would greet each other when they passed by. Every Sunday, the community would come together and go to church. He would play marbles and shoot rocks with a slingshot, or throw rocks at each other with his friends. Over summer he would often attend a town party called “La Fiesta” where there is live Mexican music called “Banda,” carnival games and rides, lots of tequila and beer, bull fights with a matador during the day, and a competition for the prettiest girl from his town and other nearby towns. During the week of the fiesta people wouldn’t return home till three or four in the morning, well at least young Ramon would return home at this time. The fiesta was where Ramon first learned about the U.S., when someone came back on vacation from the U.S. to Mexico, with nice clothes and money to give to his family. He also heard stories about all the opportunities the U.S. had to give.

Living on a ranch was challenging. It required working on the corn field, watering vegetables, milking the cows before school, feeding the farm animals, and bringing drinking water from the river. On weekends he would play marbles, shoot rocks at his friends or at cans with a slingshot, swim in the same rivers he would have to shower in, play with his dogs and play tether ball or baseball. These were all the activities he remembers doing. Ramon remembers the dangers of stray dogs, snakes, even kidnappers on the way to school, where he would walk one hour to school and one hour back, since school was a few towns away. He remembers being different from other students since they were from cities and usually came from wealthy families. Ramon would get bullied, leading to him fighting a lot and ditching school at a young age. When he was in class, teachers would hit students with a board or ruler on the hand if they misbehaved. After receiving a 6th grade education, he could not go on to attend school because his father could not afford the price. Ramon kept working for his father, which he says developed his work ethic. He remembers wanting something different, which is why he came to the U.S.

It was a regular day on the ranch, the only thing that was different was that Ramon was turning 15 and that day he made the decision that he was coming to the U.S. that year. All the stories he heard about the opportunities the U.S. had to offer and witnessing people coming back to Mexico successful gave him hope that he would do the same. The day he left, he remembers his mother telling him “no te vayas, no te vayas me hijito, es peligroso” which translates to “don’t leave, don’t leave my son, it’s dangerous.” He remembers it as a emotional day since he was leaving his parents, but he wanted to make a better future for himself. He caught a bus ride from a town nearby to Tijuana and crossed the border with no questions asked. He claimed it was the easiest thing ever. Once he crossed the border he took a bus to east L.A., where he then settled at a city called Montebello, where he first lived with family members who had already been in the U.S.

He remembers his first few weeks being difficult since he did not know a single word of English or know the area around him. Ramon said he could not attend high school because he had to provide for himself and he also wanted to send money back home to his parents. He remembers his first job that was down the street from his house as a dishwasher.  After living in Montebello for a few weeks, he met his neighbors who were carpenters and they took him in as a family member and taught him their job. For the next few months he kept working with his neighbors as a carpenter where he learned the trade, and started to make good money since there was a good amount of business at the time. There were difficulties, but Ramon does remember the good times like when he went to the beach for his first time.  He said he felt happiness that couldn’t be explained. He also enjoyed listening to American bands such as the Bee Gees, Beatles and the Rolling Stones. Ramon says even though he did not really understand the music, he loved the vibe and also loved going to concerts.

After living in L.A. for a few years, Ramon received his green card and decided to go back home for awhile since he felt homesick and wanted to visit his parents. Ramon decided to come back to the U.S. to work. He came to Palo Alto, CA, where he had a sibling who rented an apartment so he stayed with his sibling till he got a job for the city of Mountain View.

The story of Ramon Martinez was recorded by his son, Chris Martinez.